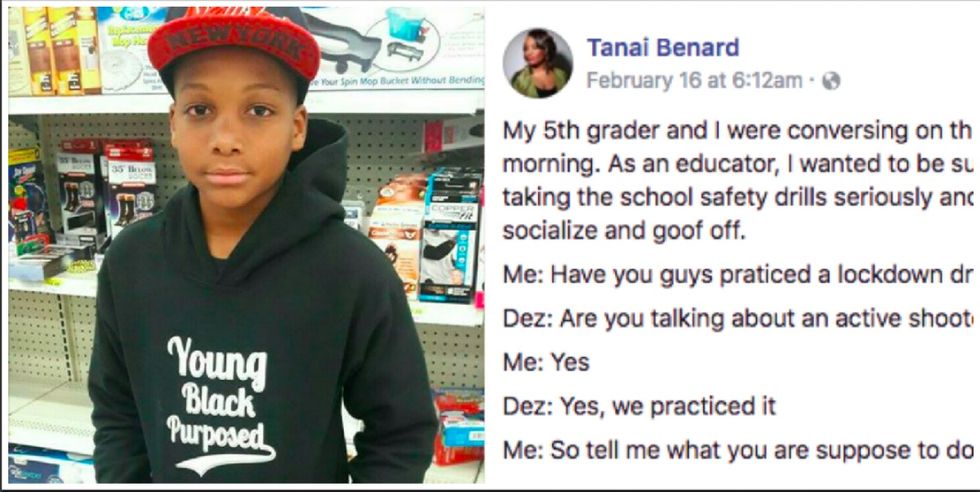 Since the Feb. 14 school shooting in Florida, parents across the nation have been in a tough position — discussing gun safety with their children.

The threat of gun violence in schools has become a painful reality for millions of parents, whether they're directly affected by recent school shootings or merely facing the possibility that their children could be in danger simply by showing up to class.

Tanai Benard, an educator from Texas, decided it was time to have an honest conversation with her fifth-grade son to find out what he knew, and didn't know, about school shooting drills designed to keep students safe.

My 5th grader and I were conversing on the way to work/school this morning. As an educator, I wanted to be sure he and...

Dez shocked and upset his Mom with what he already knew about gun violence.

To her surprise, Dez said he and his fellow students had already practiced school shooting drills, going into painfully specific details about how they worked together to make a classroom safe during an active shooter incident.

"Yes, we practiced it," Dez told Tanai when she asked if they had practiced a lockdown drill in class.

"The teacher is supposed to to shut and lock the door, put the black paper over the window on the door. Then myself and three other boys are suppose to push the table against the door. After that all the class is going to stand behind us on the back wall."

His willingness to put himself at risk to protect others initially upset her.

Tanai was horrified that her son, one of only two black children in his class, was being used as a potential human shield. However, before she lashed out, she decided to ask Dez why he was put in such a compromising position and his answer was even more shocking.

"I internally went from 0 to 100 real quick," she wrote. "Why did you get picked to stand in front of everyone else if a shooter came in your school?

"I didn't get picked," Dez answered. "I volunteered to push the table and protect my friends."

"Dez why would you volunteer to do that?" she asked.

"If it came down to it, I would rather be the one that died protecting my friends then have an entire class die and I be the only one that lived," he said.


Our children are paying attention. It's up to us where that attention goes.

While the adults debate what to do about gun violence in our nation's schools, young children are watching and waiting. It's not a coincidence that the response of students from Parkland, Florida, has become a major national story. Benard's story showcases the best and worst of what we're dealing with right now: the undeniable horror of gun violence and how it's affecting millions of children across America. They will respond with innovation and intelligence — kids almost always do. Now, it's up to the adults to change the narrative of what these kids are responding to.