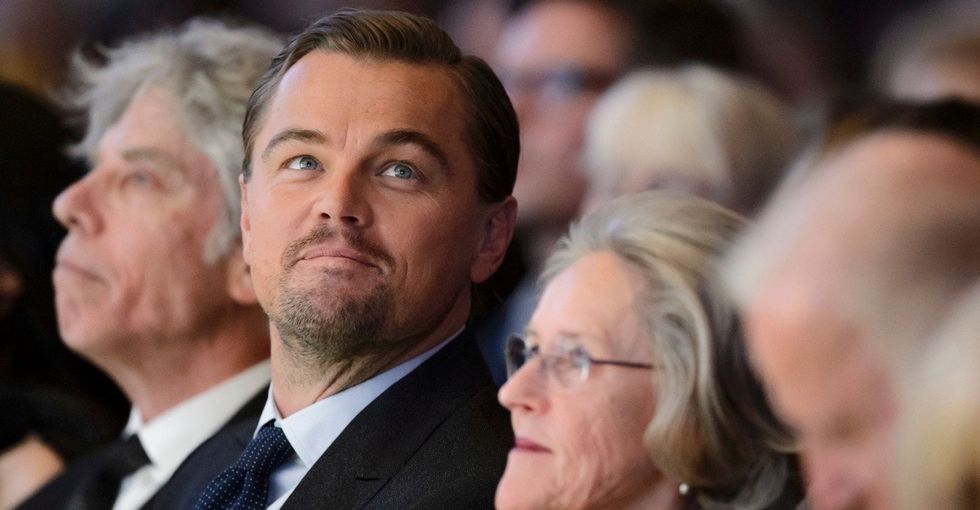 When he's not fighting off bears or trying to win an Oscar, Leonardo DiCaprio is busy saving the environment.

The man is passionate about the planet. And why shouldn't he be? It is THE ONLY PLACE CAPABLE OF SUSTAINING HUMAN LIFE. Sorry, his enthusiasm is contagious.

On Tuesday, DiCaprio received the Crystal Award from the World Economic Forum for his work on climate change.

The Crystal Award honors artists whose actions improve the state of the world. DiCaprio and his foundation (the aptly named Leonardo DiCaprio Foundation) work with more than 70 partners in 40 countries to protect the planet's remaining natural ecosystems.

As DiCaprio said in his speech, "These complex ecosystems can never be replaced; they are the foundation of our global economy, and more importantly, our interconnected climate — without them life as we know it will simply collapse."

During his acceptance speech, DiCaprio pledged $15 million from his foundation to fast-track sustainability projects around the world.

DiCaprio is putting his money where his mouth is and fast-tracking several innovative sustainability projects in every corner of the globe.

These are the five exciting projects his foundation committed to:

1. $6 million will be used to help monitor commercial fishing activity.

Global Fishing Watch is a new interactive web tool from Google, Oceana, and SkyTruth that actively monitors all of the trackable fishing activity in the ocean to help put an end to overfishing. The platform is still in the prototype stage, but will be available to the public, allowing consumers, seafood suppliers, the media, fishermen, and other stakeholders to track commercial fishing around the world.

2. $3.2 million goes toward protecting the rain forest from the palm oil industry.

The funds are headed to the Rainforest Acton Network to help protect one of the last rain forests on the Indonesian island of Sumatra. Indonesia produces much of the world's palm oil, and producers are intentionally burning forests to clear the land for plantations. The fires have resulted in dangerous brown air, over half a million respiratory infections, and more carbon emissions each day than the daily activity of the entire United States economy. The grant will help preserve 6.5 million acres of rain forest, which DiCaprio described as, "the vital lungs of our planet."

3. Another $3.4 million is headed to support indigenous populations as they defend their land against oil drilling.

ClearWater protects portions of the Amazon rain forest in Ecuador, where oil drilling has marred the once pristine landscape. The partnership with DiCaprio's organization also brings together the Ceibo Alliance — four indigenous nations, the Cófan, Secoya, Siona, and Waorani, working as one for the first time ever to protect their land, water, and rich culture.

A local activist shows waste from an oil well in the Ecuadorian Amazon. Photos by Rodrigo Buendia/AFP/Getty Images.

4. $1 million in debt relief will be given in exchange for ocean and coral reef conservation off the coast of the Seychelles.

Off the coast of east Africa's Seychelles Islands is a portion of the Indian Ocean about the size of Nebraska. Rising ocean temperatures and carbon levels are damaging coral reefs in this spot, which once provided a lush habitat for many marine animals.

To protect this vital ecosystem, the Nature Conservancy proposed a $30 million debt swap for the Seychelles Islands in exchange for a promise to protect marine life and promote conservation. DiCaprio's foundation is contributing $1 million to the effort.

A sea turtle looks for a nesting spot on the beach of one of the Seychelles outer islands. Photo by Roberto Schmidt/AFP/Getty Images.

5. And finally, $1.5 million will be used to promote renewable energy in the U.S.

Stateside, the Leonardo DiCaprio Foundation is teaming up with the Solutions Project, a nonprofit with a vision for a 100% renewable energy future. The $1.5 million will fund smaller community-based efforts all over the country.

President Obama chats with Sandra Richter, the co-founder and CEO of Soofa, which produces solar-powered sofas that can be used to charge electronic devices. Photo by Mike Theiler-Pool/Getty Images.

DiCaprio hopes to fund more projects, but he can't do it alone.

Though DiCaprio's passion is palpable, it can't write checks. And as he reminds us, currently less than 3% of all philanthropic giving goes toward conservation, sustainability, and animal protection.