There is an image that a lot of folks who were around in 1989 will remember forever. I watched it go down on live TV, and it has stuck with me to this day. Meet "Tank Man." 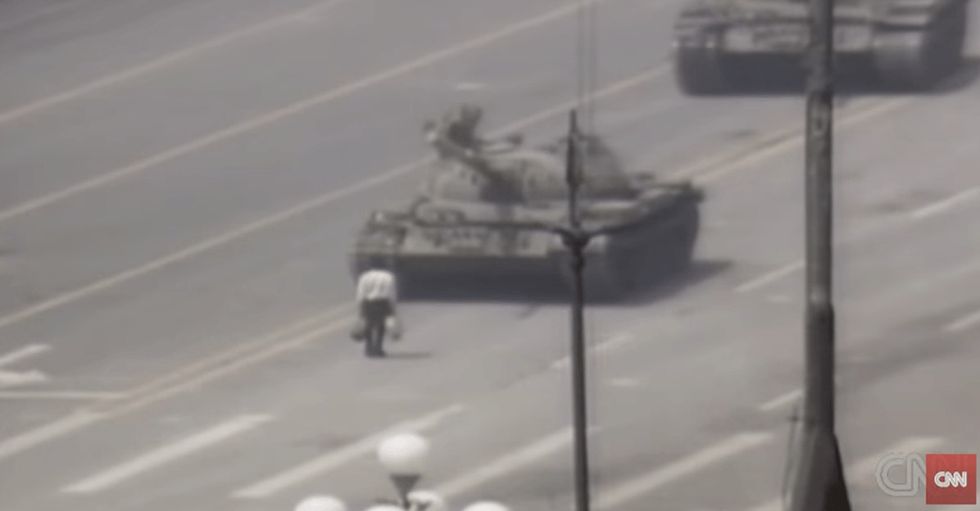 Beginning in the late-1970s, the Communist Party of China began to move the country toward a more privately-owned system in both agriculture and industry. It caused some problems.

With it came nepotism, graft, and kickbacks to those who had money and power — in other words, those who held government and party positions. Accompanying those problems was a continuation of the state-run press, which had no freedoms other than what the Communist Party allowed.

Soon, shortages of food, basic necessities, and a lack of jobs for students who had previously pretty much been guaranteed work began to stir people into action — especially young people.

Tiananmen Square one year before the massacre. Image via Wikimedia Commons.

Right in the heart of Beijing, China's Tiananmen Square in June of 1989 was alight with students and other protesters, who held it for over three weeks.

They called for freedom of speech, freedom of the press, government accountability, and restoration of workers' control over their workplaces and industry. Among other things.

Known as the Tiananmen Square Massacre, the June Fourth Incident, and the '89 Democracy Movement, the protests were squashed by the Chinese government and Communist Party by military force. China never let the true figures be known, but estimates are that at least 200 — and possibly three or four times that — were killed over the course of a few days, ending on June 4, 1989. Ultimately, the protests were halted.

One of the most recognizable images from those protests is of a solitary man the day after the protests were violently squashed, with shopping bags in his hands. He approached and stopped a vast column of tanks and bravely stood in front of them as they drove toward him heading to Tiananmen Square. Eventually, he was seen knocking on the entrance to the tank before being taken away — by whom? It's still not solved.

While the government eventually cracked down on protesters and supporters and even expelled all foreign journalists, the images and short video of "Tank Man" remain. Nobody knows who he was or what his destiny became, but he lives on in the spirit of protests to this day and the willingness of a common everyday person to take a stand and fight back.

In every culture, there are people like this who are willing to give their lives — and in some cases, do just that — for others to be free.

The heroism and the dedication of these people is something I hold onto when it feels like we're in the darkest of times, and it gives me hope.