Procrastinator? Me too. These 5 tips really helped me get to work. 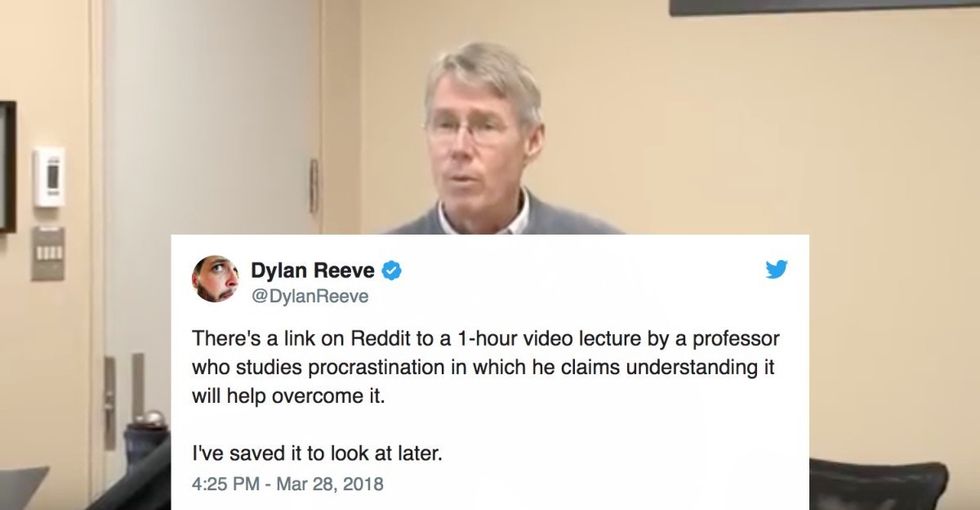 Let's get this out of the way: I'm a procrastinator. It's likely you are too.

There's nothing I enjoy more than writing — OK, sleeping is a close second — but when I open a new Word document to type out a story, I immediately begin to think about things that I would much rather be doing right now. You know, like washing every dish in the house or seeing just how many YouTube videos I can watch in an hour.

If you need more evidence that so many of us (20% of people worldwide are "true procrastinators") are putting off the things we could be doing until tomorrow — "a mystical land where 99% of all human productivity, motivation, and achievement is stored" — you need to check out this video that's going viral.

It's a lecture by professor and procrastination researcher Timothy Pychyl. The video was originally shot in 2012, but you won't be surprised to learn that not much has changed for all us procrastinators out there.

Check it out if you're looking to understand and change some of your procrastination behaviors.

Ah, you've scrolled past the video, just as I suspected you would. My guess is that your first thought was "This video is 58 minutes long!" and your second thought was "I'll definitely watch this over the weekend." Or maybe, like one Redditor, you've saved it to watch at 3 a.m. when "all other options have been exhausted."

There's a link on Reddit to a 1-hour video lecture by a professor who studies procrastination in which he claims un… https://t.co/FejFeIu4yi
— Dylan Reeve (@Dylan Reeve)1522279509.0

You know how I know? I've done this, too. So how do you break the cycle? And why should breaking it even matter? Well, here are five procrastination facts to seriously convince you to change your habits, gleaned from personal experience and boiled down from those 58 minutes I watched on your behalf.

Think back to the last time you procrastinated. Did you have a good time? Maybe a little, because it feels good to give in to avoiding something — at least at first. It's probable, though, as you watched a movie or baked cookies or scrolled social media and checked your email for the umpteenth time that you also felt guilty. And that's because you know you were putting off something that could have and should have been done right now.

And if we're being really honest, Pychyl points out in the video, behaviors we perform while procrastinating are often "moral in nature" — like cooking and cleaning. It's a way of assuaging some of our guilt for choosing to leave the taxes for another day (even though the deadline is looming).

As my thesis advisor once told me as I made another excuse for not having a part of my draft finished, "You're turning a little discomfort now into a lot of suffering later." She was right.

Sure, my house had never been cleaner (to the delight of my husband), but I also had to suffer the pain of writing a 40-page paper in less than two weeks. Not something I  recommend.

2. Procrastination can have devastating effects.

One lie we tell ourselves when we procrastinate, Pychyl says, is that we do much better under pressure. Of course, that's not at all true. In the video, Pychyl says that those who procrastinate tend to make more errors. And that leads to poorer quality work. (Research supports this.)

That's not all, though. Hate to be the bearer of bad news, but new findings show that chronic procrastination can lead to a host of health problems because putting important things off causes stress, making you vulnerable to headaches, insomnia, and even hypertension or cardiovascular disease.

People who procrastinate, Pychyl warns, also have a harder time eating well, exercising, and taking care of themselves otherwise. That's because, as he puts it, procrastination isn't a time-management issue (so that planner isn't going to help you on its own) but an existential one. You procrastinate to (unconsciously) avoid getting on with life.

3. Before you stop procrastinating, you have to realize you won't accomplish this goal overnight.

If you've ever tried to achieve a goal — or several — at one time, you know what happens. You'll start off strong, promising yourself that this is when you'll really start kicking butt and taking names. And suddenly you're exhausted and don't know if you have the strength to carry on.

That's actually not uncommon. While most of us view self-control as limitless, the reality is that it's more like a muscle — building it up takes time and effort. You're going to have to break your goal up into bite-sized pieces instead of viewing them as huge obstacles.

Whenever I'm getting ready to procrastinate (*cough* as soon as I was assigned this post *cough*), I'm reminded of this quote by Mark Twain:

What that boils down to (because boiling frogs is the healthiest way to eat them), is that if you know you've got something to do, try to do it as soon as possible so that it's over with. And do the part you're least interested in first.

GIF from The Lonely Island/NBC.

Here's another tip, this one from author James Clear: "If it takes less than two minutes, do it now." More on that:

"Want to become a better writer? Just write one sentence (2–Minute Rule), and you’ll often find yourself writing for an hour."

"Want to run three times a week? Every Monday, Wednesday, and Friday, just get your running shoes on and get out the door (2–Minute Rule), and you’ll end up putting mileage on your legs instead of popcorn in your stomach."

4. Just the fact that you spent two minutes reading this piece means you're on the way to ending your procrastination.

That wasn't so bad, was it? Let's take a moment to mark this monumental occasion with this video of a dog riding a skateboard (a perfectly beautiful and natural thing for dogs to do).

Now back to the important stuff:

As you practice not putting things off, you build up your belief in yourself. And that belief translates to a change in your habits and identity. The catch, though, is that you can't go too fast, and you can't put off the small steps until tomorrow or next week or the first of the month.

You've got to start taking care of what you've been putting off now. Stop and think what you can accomplish in a few minutes. Just start. Don't think about it.

5. The most important step? Something called "implementation intention."

You know what's on your to-do list because it's keeping you up at night. You promise yourself you'll get it done first thing tomorrow, but another day has come and gone, and you're still stuck in the same place. That's not because you're lazy but because, as Pychyl says, procrastination is "the gap between intention and action."

In the video, Pychyl says that when he asks a grad student what they're working on and they say "my thesis," he knows that they're not getting any work done. Wasn't the same true for you when you said "I'll do my homework" rather than saying "I'll do the problems I have for math followed by the paper I've got for English"?

Implementation intention, based on the work of researcher and New York University professor Peter Gollwitzer, is the idea is that you break goals down into the following formula: "In situation X, I will do behavior Y to achieve subgoal Z." You give yourself concrete plans that don't just include an intention but a clear plan for your action.

That turns "I'll definitely clean the entire house on Sunday" to "On Sunday morning, I'll do my dishes and mop the floor so that my kitchen is clean."

It's really as simple as that (and research shows that it works).

And if you find that you don't feel like it? Well, Pychyl knows that you won't. But learning to regulate your emotions is an important part of learning not to procrastinate.

"When I ask my children about feeding the fish, dogs, or horses (or any other chore, including homework), and they say, 'I don’t feel like, I don’t want to,' my typical response is, 'I didn’t ask you how you felt or what you want to do. I asked you about that action,'" Pychyl writes in a blog post.

In short, recognize that "'I don't feel like it' is not a reason, it's an excuse."