President Obama’s great response to why he went to a baseball game after a terror attack. 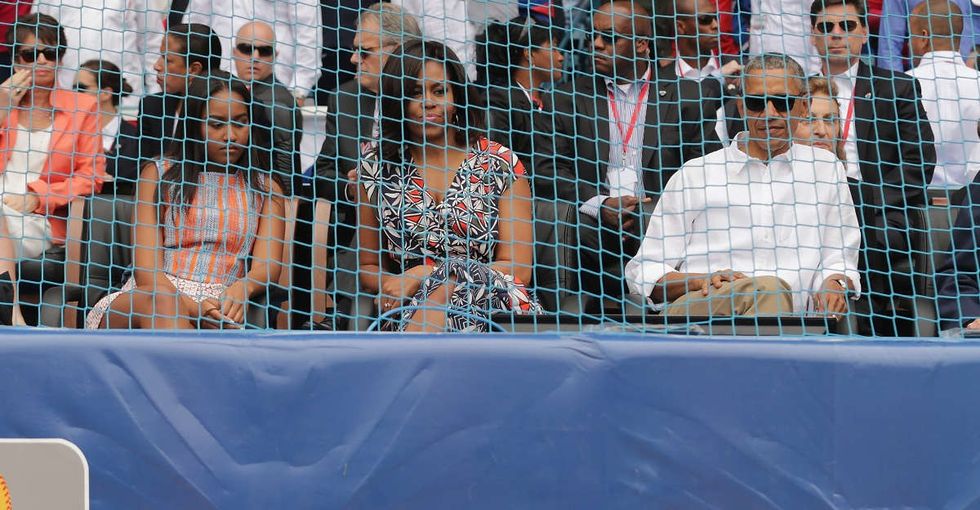 On the day of the deadliest terrorist attack in Europe since the November shootings in Paris, President Barack Obama gave a historic speech in Havana, Cuba — and then went to a baseball game.

In a mid-game interview with ESPN, Obama addressed the violence in Belgium.

"This is just one more example of why the entire world has to unite against these terrorists," Obama said. "The notion that any political agenda would justify the killing of innocent people like this is something that’s beyond the pale. We are going to continue with the over 60 nations that are pounding ISIL, and we’re going to go after them."

Later in the interview, ESPN's Karl Ravich asked Obama if he "considered not coming to the game," given the tragedy unfolding in Brussels.

The president's response should be required reading (emphasis added):

"It's always a challenge when you have a terrorist attack anywhere in the world. Particularly in this age of 24/7 news coverage, you want to be respectful and understand the gravity of the situation. But the whole premise of terrorism is to try to disrupt people's ordinary lives. And one of my most powerful memories, and one of my proudest moments as president, was watching Boston respond after the marathon. And when Ortiz went out and said, probably the only time that America didn't have a problem with somebody cursing on live TV, was when he talked about Boston and how strong it was and that it was not going to be intimidated. And that is the kind of resilience and kind of strength that we have to continually show in the face of these terrorists.

What Obama said today is true — many counterterrorism experts believe that terrorist groups like ISIS aim to terrorize us enough that we stop living our lives and start turning on each other.

With attacks like this one, organizations like ISIS aim to exacerbate the divide between the West and the Muslim world, throw suspicion on refugees, and instigate reciprocal violence that helps them recruit.

It's evolving into one of their signature tactics — and tragically, sometimes it works.

Thankfully, many of the people of Brussels were having none of it today, coming together, offering rides to people who were stranded, and chalking messages of support in public plazas even as the dust from the attacks was still settling.

It's understandable to be scared in the wake of a terror attack. But it's when we let that fear goad us into shutting down or lashing out violently against those who don't deserve it that bad things happen.

Obama is right that sometimes the most powerful weapon we have is to refuse to give into fear. On days like these, that can mean the best way to not let the terrorists win is plain and simple: