President Obama had some sympathetic words for the GOP. Every voter should hear them. 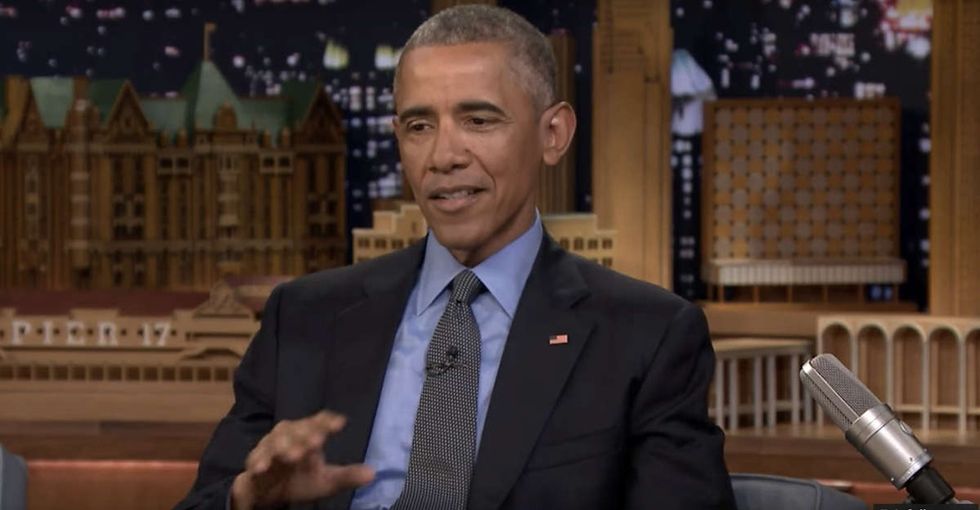 After slow-jamming the news with the president of the United States, Jimmy Fallon asked the commander-in-chief if he thought the Republicans were happy with Donald Trump as their nominee.

But the message he delivered next was sobering and surprisingly sympathetic to Republicans.

And he had a stern message for Democrats who might be tempted to take pleasure in their political opponents misfortune:

"What's happened in that party culminating in this current nomination, I think, is not actually good for the country as a whole. It's not something Democrats should wish for."

"Democracy works, this country works, when you have two parties that are serious and trying to solve problems," Obama told Fallon.

A healthy Republican Party, the president argued, is essential to making concrete, lasting progress, insisting that the last thing Democrats should root for is a weak, poorly led opposition.

"You want folks who understand the issues and where you can sit across the table from them and you have a principled argument, and ultimately, you can still move the country forward."

To some extent, this is simply an extension of what Obama has said countless times before.

Exhorting political opponents to debate each other in good faith is a theme the president frequently returns to, dating all the way back to his breakout 2004 Democratic National Convention speech.

But it has taken on a new urgency now. As we're seeing, a fractured GOP doesn't lead to a stronger democracy or country but instead leads to greater incivility.

It's how you wind up with a presumptive nominee who argues that a federal judge should be disqualified from adjudicating a case against him on the basis of the judge's race.

It's how you wind up with GOP Sen. David Perdue saying a "prayer" for President Obama but actually quoting a Bible verse, which, in its original context, has frequently been interpreted as a call for the subject's death.

And, on the other side, it's how you wind up with protesters throwing eggs at Trump supporters, punching them, and even allegedly assaulting them with weapons.

The good news? It doesn't have to be this way.

"There are wonderful Republicans out in the country who want what's best for the country and may disagree with me on some things but are good decent people," the president said.

The more Republicans put their best, most thoughtful, most qualified people in charge, and the less Democrats argue with them vigorously without shouting them down or right-hooking them in the face, the better off we'll all be.

Because, whether you're a Democrat, a Republican, or neither, the president is right: The best version of our democracy is not when we all agree on everything — but when we disagree in good faith.

Watch the full interview below: