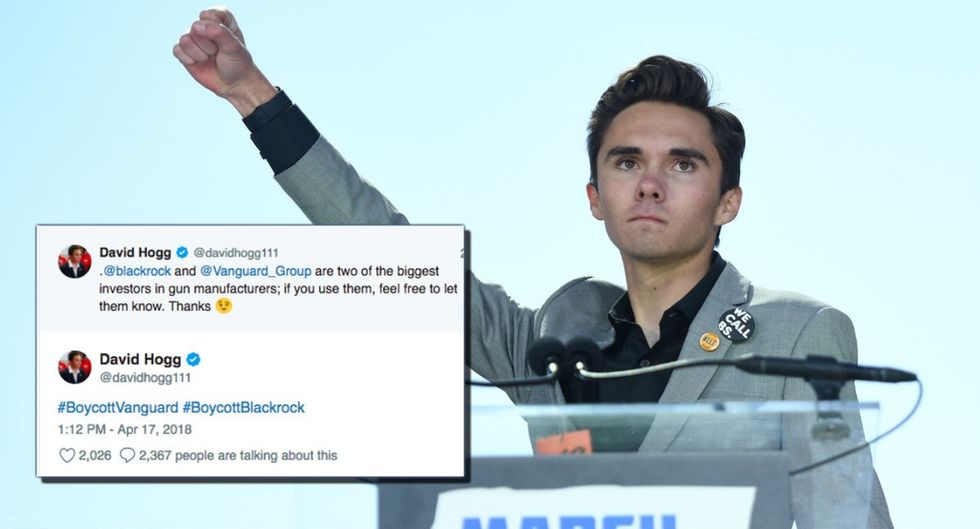 David Hogg knows a thing or two about boycotts.

Before that, he helped bring attention to companies that have business deals with the NRA, leading to some companies like Hertz to end those partnerships.

Now he's calling out some of the country's biggest investment firms for enriching the gun industry.

On April 17, Hogg tweeted to his 700k followers that Vanguard and BlackRock "are two of the biggest investors in gun manufacturers; if you use them, feel free to let them know. Thanks," adding “#BoycottVanguard #BoycottBlackrock,” in a series of follow-up tweets.

This is far bigger than his boycott of Laura Ingraham because it affects millions of people with retirement funds — probably including you.

According to some estimates, around 90 million Americans invest in gun manufacturers through their retirement plans, resulting in $1.51 billion in yearly earnings for the industry. That means the average American with a 401(k) plan has around $17 invested in gun manufacturer stocks, whether they know it or not.

Simply put, if Hogg and his supporters can convince Vanguard and BlackRock to reduce or divest their gun stocks, it would have a major impact on the industry.

BlackRock is now offering customers a fund free of gun investment and said it's talking to gun manufacturers.

Both companies pushed back against Hogg's boycott call without specifically criticizing Hogg or any other student activists.

BlackRock has already created an investment plan for customers that is specifically free of stocks tied to gun manufacturers and said it has engaged with some of those gun manufacturers about public policy issues surrounding gun safety in a larger reassessment of its relationship with those companies following the Parkland shootings.

Vanguard also released a statement claiming that "359 of its 388 funds do not directly invest in ... Ruger, American Outdoor Brands, or Vista Outdoor." They noted that customers can request an investment fund that does not contribute to gun manufacturers and echoed BlackRock's decision to engage directly with gun manufacturers over policy discussions.

"Importantly, Vanguard is taking action, meeting with the leaders of gun manufacturers and distributors," the statement read. "We want to know how they will mitigate the risks that their products pose and how they plan to help prevent such tragedies from happening again."

If you're unsure where your retirement funds are being invested, here are two guides that can help you ensure your funds aren't going to gun companies.

As awareness of corporate responsibility grows, Hogg is proving that our retirement funds don't have to come at the cost of others' lives.

Hogg is showing activists and concerned consumers alike how they can use their voices and their wallets to affect the gun violence epidemic in the U.S.

While progress continues to stall on actual gun safety legislation, businesses and larger corporations are not immune to economic pressure. Investing in gun manufacturers has been good business for fund managers, but it certainly isn't the defining source of their income.

So if the boycott continues, it could prove to be a headache that far outweighs any financial gain they previously enjoyed.