Our national parks are mired in human feces and garbage—is this what 'great' looks like? 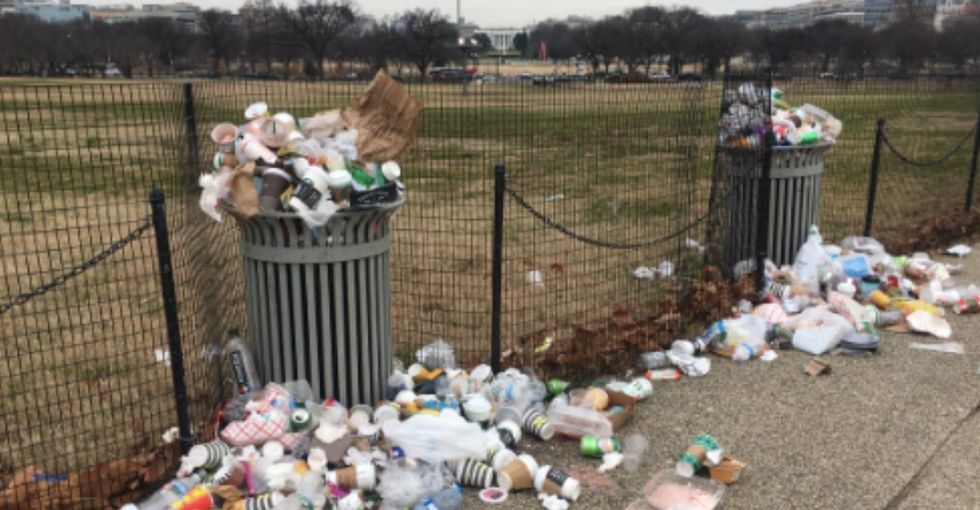 The government shutdown is having some disturbing—and disgusting—consequences for our beloved public lands.

For decades, the U.S. national parks have been a strong point of pride for our nation. Tourists come from all over the world to witness the diverse majesty and beauty preserved and maintained in 59 American national parks. More than 330 million people visited these wonders in 2017.

However, that point of pride is quickly becoming a source of embarrassment as the government shutdown has hampered the parks' ability to keep up with this year's holiday wave of visitors. With no one to clean bathrooms or empty trash cans, people have resorted to doing their business out in the open and leaving their messes behind. Reports of garbage and human feces littering the parks have been pouring across the media, much to the dismay of nature lovers everywhere.

#governmentshutdown #shutdown Quick pic on my bike ride in. That’s the White House in the background. The National… https://t.co/nOjuLjfevV
— Nick Schwellenbach (@Nick Schwellenbach) 1546437327.0

A report from an anonymous Ranger at Yosemite highlights the problems facing National Park Service employees.

National Alert: The government shutdown is destroying our parks! Words from a Ranger in Yosemite National Park. Name of...

"Today I worked. We held Yosemite open to 4th of July-level traffic with no support staff whatsoever. We did so with 4 rangers in Wawona/Badger, 4 in Yosemite Valley and (may be slightly off....) 4 in Mather. That is 12 people working while we were seeing 240-270 cars per hour coming into South Entrance. Let that sink in. TWELVE people. In a park the size of Rhode Island. Badger sold almost 1,000 lift tickets today (their limit is 1200)."

"There are piles if human shit everywhere. Gross, but so seriously true. Every roadside turnout has toilet paper and trash. Garbage cans are overflowing until we can get time to pick it up. People are screaming about paying their taxes and having rights, people are fighting over tickets issued for violating closures when they duck under barricades and walk past signs so they can do what they want."

"Keeping parks accessible is reasonable if people can fend for themselves and care for the park themselves, but the large majority can't. The large majority needs a map because their GPS quits working when cell service drops, and they don't have one because the Entrance staff wasn't there to give them one. The large majority has no idea what a cat hole is and would never consider picking up their used toilet paper and sticking in their purse. The large majority doesn't know what to do if they break an ankle and can't get 911 on the phone. The large majority cannot use their public lands in a way that allows them to remain unimpaired for their kid's children. That is why they hire the National Park Service. To provide a service to the vast majority who don't know how to be a true steward for their land or don't care to be. I beg all of you to stay home and not visit your parks until everyone comes back to work. Your experience will be ten thousand times better.”

Some private citizens are trying to help mitigate the mess and mass of humanity.

CBS News reported that Ethan Feltges, who runs a gift shop outside Joshua Tree National Park, and other business owners have tried to help protect the park and help visitors in the absence of park rangers and employees. He set up a portable toilet at his store and offered guidance and tips to tourists. Some business owners have brought in trailers to empty the overflowing trash cans.

"The whole community has come together," Feltges told CBS. "Everyone loves the park. And there's a lot of businesses that actually need the park."

However, their efforts were not enough to keep the park running. Joshua Tree's campgrounds have been closed due to full pit toilets and overflowing garbage, though the park itself remains open.

In some previous government shutdowns, national parks have been closed altogether. While not ideal, that certainly seems preferable to keeping them open without the personnel needed to maintain them at a very basic level.

Yes, some people are horrible stewards. That's why we have the National Park Service to begin with.

Some have begun complaining that people are abusing our national parks in the absence of maintenance crews, gatekeepers, and rule enforcers. But that's why we have those people in place in the first place. When you get large numbers of humans in one place, there has to be a system in place to manage it—not just to take out their trash and clean their bathrooms, but to make sure they don't start mucking things up.

It's like when Will Smith's character in "Men in Black" asserted that people were smart enough to handle knowing about aliens, and Tommy Lee Jones' character responded, "A person is smart. People are dumb, panicky, dangerous animals, and you know it." He wasn't wrong.

And when people are faced with arriving at at National Park that they didn't know was going to be affected in such a way, needing to use a bathroom that isn't available, what are they supposed to do? And if too many employees are furloughed to keep the parks running without risk to the public, why keep them open?

The decisions being made during this shutdown are baffling—and embarrassing. We've just entered 2019 with our beautiful National Parks overflowing with literal crap and garbage. If this is what being "great again" looks like, I think I'll pass.

Emily Calandrelli was stopped by TSA agents when she tried to bring her ice packs for pumped milk through airport security.

Traveling without your baby for the first time can be tough. And if you're breastfeeding, it can be even tougher, as you have to pump milk every few hours to keep your body producing enough, to avoid an enormous amount of discomfort and to prevent risk of infection.

But for Emily Calandrelli, taking a recent work trip away from her 10-week-old son was far more challenging than it needed to be.

Calandrelli is a mom of two, an aerospace engineer and the host of the Netflix kids' science show "Emily's Wonder Lab." She was recently taking her first work trip since welcoming her second child, which included a five-hour flight from Los Angeles to Washington, D.C. Calandrelli is breastfeeding her son and had planned to pump just before boarding the plane. She brought ice packs to keep the milk from spoiling during the flight, but when she tried to go through airport security, the TSA agents refused to let her take some of her supplies.