Only 4% of the world's oceans are protected — and a lot of that's in a country you haven't heard of. 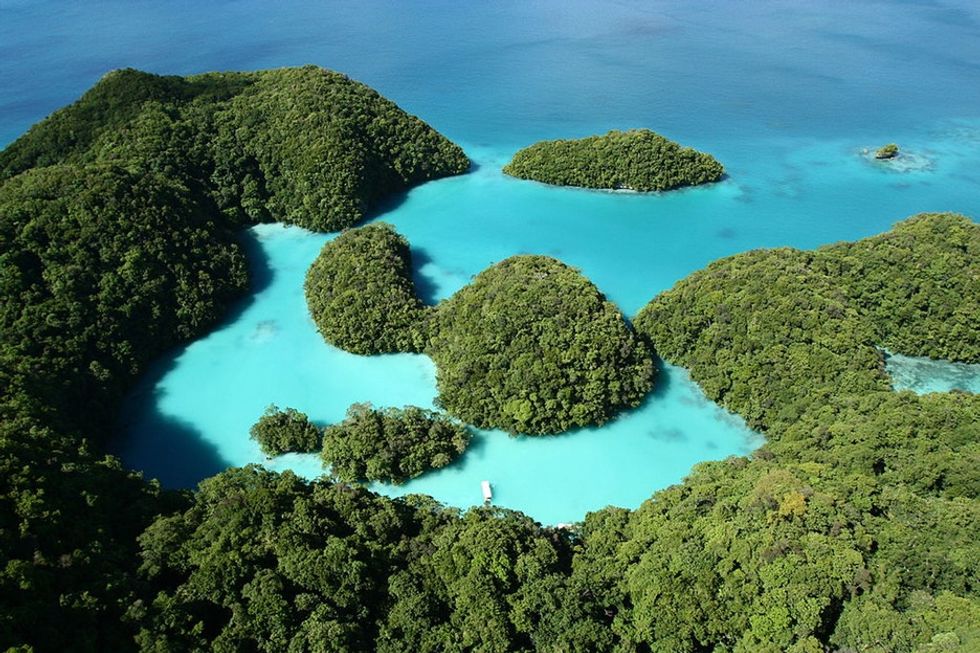 For something that makes up 71% of the surface of the planet, it's kind of crazy to think that we only protect 4% of our ocean water.

It goes without saying that water is important. It comprises 55% to 78% percent of our bodies and about 19% of the electricity in the world. tl;dr — it's pretty crucial to our survival.

But while water can do some amazing things, it can't stand up and protect itself from things like massive oil spills or other man-made damages to its regulatory systems. Mostly it just lays there, passively sloshing back and forth, and oh yeah, cultivating an incredible ecosystem for millions of amazing creatures.

And yet, for all the time that we've spent fighting over land, there's still 140 million square miles of the Earth's surface that no one's looking out for. Does that seem odd to you?

But now an island nation that's smaller than New York City has created a new ocean reserve the size of California.

Located in the western Pacific Ocean just north of New Guinea and east of the Philippines, Palau is a tiny presidential republic of 21,000 people spread across 250 separate islands.

But the country's legal property extends an additional twelve nautical miles around each island, bringing Palau's overall size up to nearly 193,000 square miles. These waters are home to some of the most diverse and remarkable aquatic ecosystems on the planet, with more than 700 different kinds of coral and 1,300 unique species of fish.

And as of Oct. 22, 2015, 80% of Palau's aquatic area has been designated as protected ocean territory. The remaining 20% will remain open to local fisherman and a limited number of other small-scale commercial activities.

An Indo-Pacific coral reef, like what might be found in the waters around Palau. Photo via Fascinating Universe/Wikimedia Commons.

Despite its limited landmass, Palau's new ocean reserve is one of the largest on the planet — and makes up the largest percentage of protected waters.

New Zealand's own, recently-announced ocean reserve will be 620,000 square miles but only 15% of their total exclusive economic zone (the UN-recognized open water borders).

The United States currently protects less than 4% of its waters, compared to 18% of its total landmass; of course, that's still 490,000 square miles of ocean.

Chile has also committed to protecting a total of 350,000 square miles of ocean between their coasts and the waters around Easter Island.

While the U.K.'s Pitcairn Islands reserve only measures 322,000 square miles, it does have the distinction of being the largest single and uninterrupted marine protected area on the planet so far.

This kind of action is particularly important in places like Palau that face the brunt of our ecological problems.

While some of us can more easily go about our lives oblivious to the environmental damage being done to the planet by the human race, people in places like Palau are not so lucky. They still rely on local fishing and other natural resources to survive, and even as we speak, the rising sea levels threaten to swallow up the shores beneath their feet.

"Island communities have been among the hardest hit by the threats facing the ocean," said Palau president Tommy E. Remengesau Jr. in the press release announcing this new ocean protection initiative. "Creating this sanctuary is a bold move that the people of Palau recognize as essential to our survival. We want to lead the way in restoring the health of the ocean for future generations."

A lake with jellyfish in Palau. Photo by Onyo/Wikimedia Commons.

So let's stand together and tell our world leaders to protect the rest of our precious waters.

We can start just south of Palau with Australia's Great Bight, the longest east-west ice-free coastline in the southern hemisphere. The Bight is currently being threatened by oil drillers like BP, risking the lives and livelihood of countless animals and people alike.

After you're done with that, come back here and have a look for yourself at just how amazing these underwater habitats can be: