One week, 2 tragic deaths, and alarming stats on suicide: America, this is a wake-up call.

Since 1999, suicide rates in the United States have risen nearly 30%. 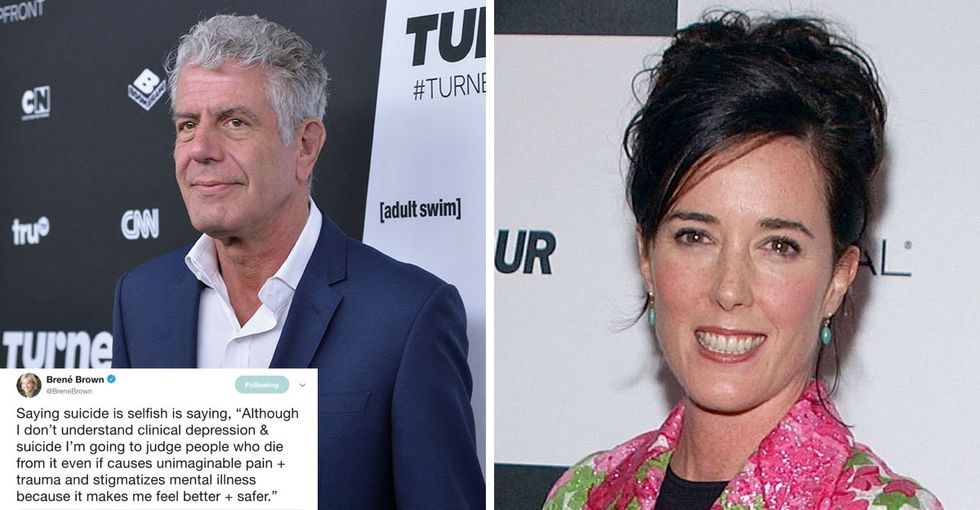 After two devastating celebrity suicides, the country is talking about the profound impact of mental health issues.

Designer Kate Spade and celebrity chef and television host Anthony Bourdain both died by suicide within just a few days of each other. It's two headline-grabbing instances indicative of a terrifying situation in our country.

While celebrities garner wide attention when suicide and mental health issues occur, it's an epidemic faced by millions of everyday Americans on a large scale. A recent CDC report on suicide in the United States shows that since 1999, suicide rates in the United States have risen nearly 30%.

54% of the people who died by suicide weren't previously diagnosed with a mental health issue. But it's more complicated than that.

According to David Brent, professor of psychiatry at the University of Pittsburgh, it's important to understand there wasn't a known mental illness for 54% of those who killed themselves — meaning those struggling with a mental illness may not have known they had one.

"The reason most suicide decedents don’t have a known mental disorder is that they were never diagnosed, not that they didn’t have one," Brent writes in an email.

"It has been established over and over again that 90% of individuals who die by suicide have at least one, and often more than one, major mental disorder through psychological autopsy studies," Brent adds. "So the idea that one’s life circumstances, or availability of lethal agents, can drive one to suicide certainly can happen."

Brent brings up an interesting point that many struggle to understand when famous celebrities end their own lives. Suicide is not limited to those who are struggling financially, have unfulfilling jobs, or have mundane lives. Contrary to popular belief, it is possible to live an extremely wealthy life with continuous success and still struggle. Mental illness and suicide do not discriminate. They can affect all people.

The surprising reality of challenges that famous people experience behind the scenes can be hard to understand. Bourdain was open about his struggles with drug addiction and depression, but it's unclear of how much professional support Bourdain had before his death. After Kate Spade's death, reports noted that the designer struggled with mental illness for years but refrained from seeking help because of fears that it would hurt her "happy" brand. Celebs and regular citizens should feel able and empowered to seek help.

Society must continue to foster a culture that doesn't stigmatize those seeking mental health services so they aren't afraid in the first place.

As suicide rates across the nation continue to climb, experts continue to note the importance of reaching out for appropriate diagnosis and treatment.

"We have worked really hard to explain to the public that suicide is not simply a matter of too much stress but that it involves the identification and treatment of mental disorders as one important component," Brent writes.

The conversation on how to prevent suicide and address the mental illnesses that often precede them is ongoing and complex. After all, there isn't a one-size-fits-all approach to treatment.

Today, I think, is a moment to listen to those who have experienced suicidal thoughts so that we can all better und… https://t.co/YXpgThzszh
— Clint Smith (@Clint Smith)1528470809.0

We have the capacity to address mental health and reduce suicides — and we need to learn how to make that happen.

"I believe that we know enough to prevent suicide now," Brent writes. "Suicide is not going up in every country. Work from While et al. (2012) and Kapur et al. (2016) has demonstrated that improvements in how mental health care is delivered can reduce suicide in the U.K. In the Henry Ford Hospital System, an approach called Zero Suicide Initiative has been shown to dramatically reduce the suicide rate among individuals in their system with mental health disorders. There are evidence based prevention programs that can substantially reduce the rate of conditions that lead to suicide: criminality, violence, depression, substance abuse [such as] Good Behavior Game, for example or YAMS, Wasserman et al., Lancet, now being implemented in Montana."

In addition to the resources Brent suggests, it's also important to show up for those around us who are struggling. Numerous researchers and suicide prevention experts suggest showing struggling friends and family support without judgment, asking specific questions, and suggesting seeking professional help.

And if you yourself are struggling, know that there are immediate resources available if you're in a crisis. There are many organizations to become familiar with, including the National Suicide Prevention Lifeline 800-273-8255, the Crisis Text Line (text "HOME" to 741741), and the Trevor Project 866-488-7386.