Nate Holley is being hailed a hero for his bravery during a school shooting. Is this really what we've come to, America? 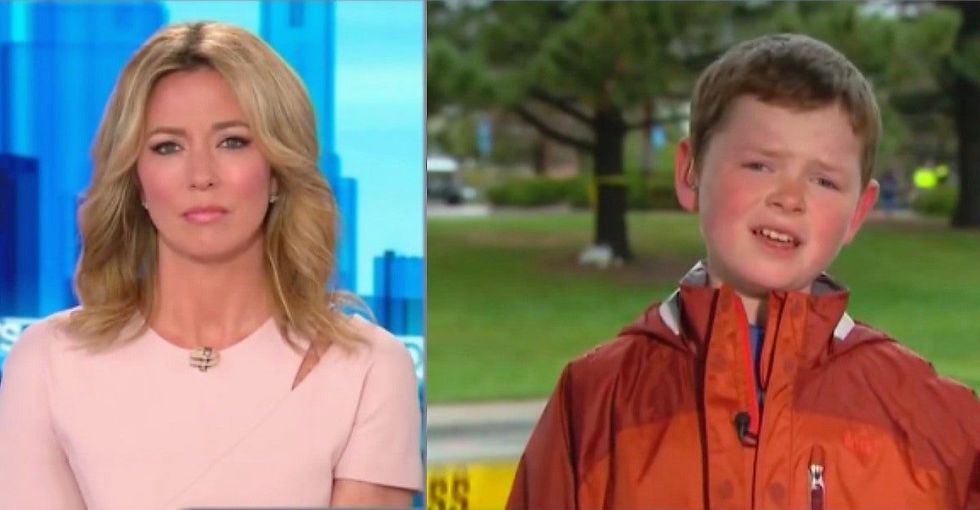 Nate Holley is being hailed a hero for his bravery during a school shooting. Is this really what we've come to, America?

Nate Holley walked out of his suburban Colorado school on May 7, 2019, physically unharmed. Two students had opened fire on their STEM School classmates that day, killing one and wounding seven others. It was the 35th U.S. school shooting this school year.

Nate is 12 years old and in the sixth grade. Nate told CNN that when he heard the gunshots he froze. He said a kid in his class cracked a joke before his teacher told them to shut up and hide behind her desk.

Nate said half the kids in his class burst into tears. As the shooters got closer, they were ushered into a closet.

Nate was scared. He put his hand a metal baseball bat in the closet.

Nate was scared, but brave. Nate was also lucky.

Watch this interview, America. Look at what we've done to our children.

Officially, there is no war on American soil. Unofficially, we are training child soldiers in our schools.

When U.S. schools started doing regular active shooter drills, I felt conflicted. I was teaching at a high school when Columbine happened. At that point, school shootings were shocking and such drills were unheard of. Twenty years later, few of us are shocked by anything, and drills are old hat.

Being prepared seems wise, but schools in other developed nations don't regularly train for gunmen to walk into the building and start shooting children. It feels strange for us to be preparing kids to be shot at in a classroom. It feels wrong.

I've written a lot on this topic, but Nate Holley's interview shook me in a whole new way. Not just because of his innocence while describing a terrifying scenario. Not just because his sweet, freckled face shouldn't have to be telling this familiar story.

What shook me was his determination to "go down fighting." His instinct to grab a weapon and face down an attacker. The matter-of-fact way he talked about how he might "go down."

The newest approach to active shooter preparation in schools is telling staff, teachers, and schoolchildren to fight back, if the situation allows for it, with objects—staplers, paper weights, baseball bats.

In classrooms and cafeterias.

Against people with guns.

That only sounds wise and reasonable if we accept the premise that schools are potential war zones, and accept that our children will be soldiers in the fight. We are resigned to training children to fight an unofficial war.

America. Look at us. Look at what we are allowing to happen.

No child should have to play the hero against a shooter in their classroom because adults refuse to act.

When you live in this bizarre reality, it starts to feel normal. Even for those who despise it and are terrified by it, there's a normalcy to the regularity of school shootings. It's no longer if, but when, the next one will occur. When we train kids for it regularly, we've obviously accepted it as a natural possibility, like an earthquake or a tornado or a fire.

But it's not normal. This is not normal.Kids rehearsing school shootings is not normal anywhere in the developed world but here. We don't live in a war-torn nation, yet I'm afraid we are one degree away from training our children to respond to gunfire with gunfire. Is that not the next logical step? What else will we do when it becomes clear that staplers and baseball bats are no match for a semi-automatic arsenal?

Why do we prepare for the inevitability of mass shootings instead of doing everything in our power to prevent them? Naturally, prevention is more complex than simply strengthening gun legislation, but it's a huge piece of the puzzle that so many people want to pretend doesn't exist.

Evidence points to legislation, no matter how many people say that criminals don't follow laws.

We can talk about individual shootings all day long, but policy should be based on data. And the data shows that stronger gun laws correlate to lower gun deaths—not just in other developed countries, but even here in the United States.

We need to stop pretending that our position as an outlier among our peer nations has nothing to do with our guns and gun laws. We need to stop acting like this is a partisan issue. We need to start putting our kids first, as any civilized nation would do.

We need to stop treating our children like would-be soldiers and give them the real childhood they deserve.

'I didn’t want to remember the day as complete sadness.'

The show must go on… and more power to her.

There are few things that feel more awful than being stranded at the altar by your spouse-to-be. That’s why people are cheering on Kayley Stead, 27, from the U.K. for turning a day of extreme disappointment into a party for her friends, family and most importantly, herself.

According to a report in The Metro, on Thursday, September 15, Stead woke up in an Airbnb with her bridemaids, having no idea that her fiance, Kallum Norton, 24, had run off early that morning. The word got to Stead’s bridesmaids at around 7 a.m. the day of the wedding.

“[A groomsman] called one of the maids of honor to explain that the groom had ‘gone.’ We were told he had left the caravan they were staying at in Oxwich Bay (the venue) at 12:30 a.m. to visit his family, who were staying in another caravan nearby and hadn’t returned. When they woke in the morning, he was not there and his car had gone,” Jordie Cullen wrote on a GoFundMe page.