NASA shared a photo of that Delaware-sized iceberg from space. It's huge.

'Will the glaciers behind the ice shelf accelerate and have a direct contribution to sea level rise?' 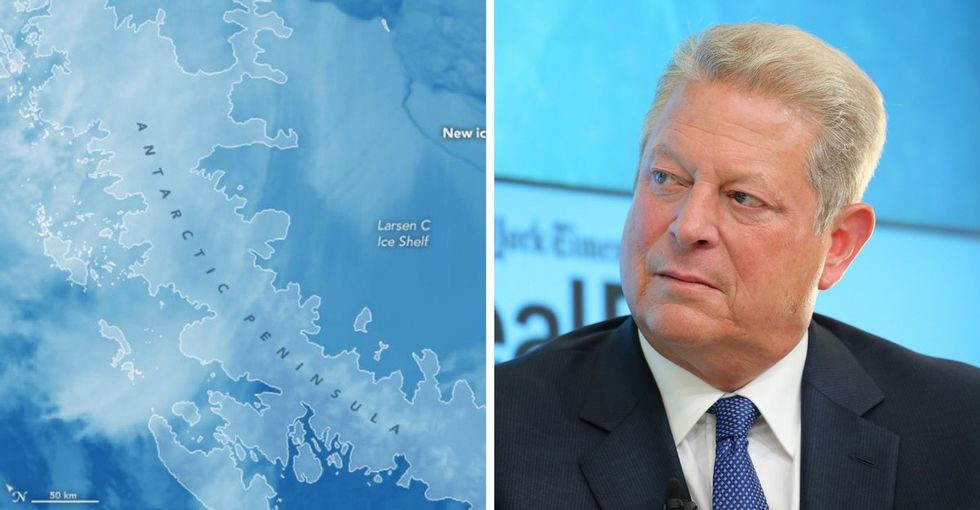 Are we on a sinking ship, watching dreadfully as the sea rises around us, an iceberg — bobbing in the distance — the telltale sign of our demise?

No, I'm not talking about what happened to passengers of the Titanic. I'm talking about the ridiculously massive chunk of ice — roughly the size of Delaware — that broke off from an Antarctic ice sheet last week.

Just as a reminder, here's Delaware:

Sure, Delaware might seem pretty small when you compare it to, say, Alaska or Texas. But a chunk of ice as large as Delaware — about 2,200 square miles, or over seven times the size of New York City — is simply enormous for what's basically one of Mother Earth's ice cubes.

The iceberg is so big, you can see it from space.

Imagery acquired by NASA on July 12, 2017, really helps put its size in perspective.

This infrared image taken from space reflects a "false-color view" of the region, according to NASA; the darker the blue hue, the warmer the temperature. Image via NASA.

To better understand why we have this humungous piece of floating ice on our hands, we have to go back three years.

According to NASA, a crack that'd been slowly inching along Antarctica’s Larsen C ice shelf suddenly began accelerating in size and scope in 2014.

An iceberg about the size of Delaware has split off from Antarctica - scientists wonder: what happens next?… https://t.co/OlVmuvSK9W
— NASA ICE (@NASA ICE)1499876622.0

The crack eventually caused a rift deep and long enough, and that's what caused the iceberg to break off.

Dan McGrath, a glaciologist at Colorado State University, said scientists aren't exactly sure what changed in 2014 that allowed the rift to expand so rapidly, but, in all likelihood, human-created climate change didn't help.

"The Antarctic Peninsula has been one of the fastest warming places on the planet throughout the latter half of the 20th century," he said. "We haven’t made a direct connection with the warming climate. Still, there are definitely mechanisms by which this rift could be linked to climate change, most notably through warmer ocean waters eating away at the base of the shelf."

Although this iceberg has caused quite the stir, the truly telling developments will come later, experts believe.

This latest iceberg removed more than 10% of that particular ice shelf, The New York Times reported, and that could speed up the flow of glacial water into the ocean.

To put it simply, that would not be good.

"It’s significant as a sign of what is happening to Antarctica as a whole," former Vice President Al Gore explained to Stephen Colbert of what we can learn from the event. "This particular ice shelf, it’s already floating, so it won’t raise sea level, but if the others behind it also come off, that could release more land-based ice that would raise sea levels."

It's a big question NASA scientists are asking, too.

"The interesting thing is what happens next," said Kelly Brunt, a glaciologist at NASA’s Goddard Space Flight Center and the University of Maryland. "Will the glaciers behind the ice shelf accelerate and have a direct contribution to sea level rise? Or is this just a normal calving event?"

Only time (and our collective desire to confront climate change) will tell.

Spanx founder Sara Blakely surprised her employees with a trip for two to anywhere in the world.

It all started with a pair of white pants.

Sara Blakely was getting ready for a party in 1998 and couldn't find a pair of undies that looked smooth under her white pants. So she took a pair of scissors to a pair of control-top pantyhose and ended up creating the first rendition of what would become her billion-dollar business idea.

Not too shabby for a woman who sold fax machines door-to-door before some unsightly panty lines drastically shifted her life.

After founding Spanx with just $5000 of her own money, Blakely, now 50, just sold the majority stake in the business to investment firm Blackstone, with a valuation of $1.2 billion. Blakely isn't leaving or anything—she retains a significant share of the company, according to the Atlanta Journal-Constitution, and will become executive chairwoman once the transaction closes.

"This is a really important moment in time for female entrepreneurs," Blakely said of the deal in a press release. "I started this company with no business experience and very little money, but I cared the most about the customer, and that gave me the courage to launch the company."

Blakely also cares about her employees. Every conscientious businessperson understands that you can't grow a successful company without hard-working employees, but not every businessperson generously rewards the people who help build and maintain their success. Blakely does, however. Upon selling part of the company, she decided to share some of the wealth she gained with the 500+ people she employs.

From Your Site Articles
Related Articles Around the Web
pets
Get stories worth sharing delivered to your inbox
By signing up you agree to Upworthy's privacy policy.
Trending Stories
elementary school nostalgia
Time Passes

A woman wrongly accused a man of stealing her friend's car. His response is a must-see

A Twitter user asked people to share the most random facts they know. The answers didn't disappoint.