My 4-year-old was told not to say, 'Happy holidays.' Here's how I responded. 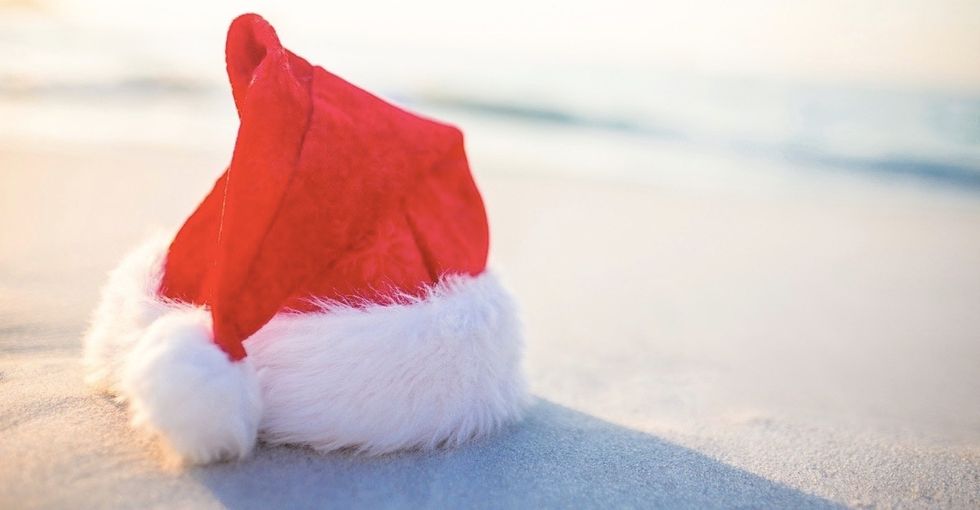 An innocent trip to the supermarket with my 4-year-old daughter showed me how strange this world has become.

It started with me playing the all-too-familiar role of "Shopping Cart Mutombo" (essentially swatting away all of the junk food she attempted to put inside the cart). Nothing unusual there.

Not in Dikembe Mutombo's house, kid. GIF from Geico.

Later on, we encountered a woman who stopped us to say how cute my daughter's "Frozen" T-shirt was. As we were about to part ways, I whispered to my kiddo to wish the lady happy holidays. Again, nothing odd there, right?

Well, not so much.

The woman smiled at my daughter and said,"Honey, your daddy should teach you to wish people a 'merry Christmas,' not happy holidays, OK?"

My little one quickly responded with a sheepish, "OK," and that was the end of our brief encounter.

What just happened? One second she's complimenting my kid's outfit, and before I knew it, she was telling me how to raise her. Needless to say, I was less than pleased.

I'm a Christian who celebrates Christmas, but I'm not buying this "War on Christmas" nonsense because it's a war that doesn't exist. I also fully reject the notion that my daughter should say "merry Christmas" to everyone she comes across.

When we got home, I gave my daughter three reasons why that lady was wrong in terms that even a 4-year-old can understand.

I could start and end my rant with that, but since we're on the topic of silliness, let's push forward with a silly analogy that I shared with my daughter.

Let's say there is a fantastic buffet that offered the best mozzarella sticks in town. When it comes to dipping sauces, she's on Team Marinara all the way and — coincidentally — that was the only sauce this establishment had available.

Customers with diverse tastes start to visit the buffet, so the owners decided to do something about it. Instead of providing a "marinara" section, there is now a "sauce" section of the buffet where the marinara is in a container next to a container of ranch dressing and a container of some other secret dip that nobody is quite sure of.

So, here's the question I posed to my kid: "Would it upset you if all of the sauces were grouped together? Remember, you can still have your marinara sauce, but it will be placed with the other sauces."

Her response was a cautious, "No," assuming this was part of a trick question. I assured her it wasn't.

I know what she wouldn't do. She wouldn't throw a tantrum about how there's a "war on marinara sauce" and that we're becoming "too politically correct" by including other sauces that don't appeal to her.

2. The Christian population in America is dwindling, and we need to be inclusive of other religions.

Again, I'm a Christian, but we need to stop acting as if Christian celebrations and beliefs are all that should matter in America.

A whopping 70% of Americans claim Christianity as their faith, but that percentage dropped by approximately eight percentage points since 2007 according to the Pew Research Center.

Why does that matter? Because the number of non-Christians in America is growing. That means more Jews, Hindus, agnostics, atheists, and (gasp) Muslims are walking among us. While certain bombastic presidential candidates may not like some of that change, I personally think it's wonderful.

Another factor is millennials are less likely to be religious than any other group, although many of them identify as spiritual.

As this trend continues, fewer people are identifying with Christianity and more people are choosing other religions — and in some cases, no religion at all. Does it really make sense to wish everyone a "merry Christmas" if that's the case?

That's when I asked my daughter a second question. "If you were at a playground and only a select group of kids could play with the toys while the others were left out, do you think that would be fair?"

Again, my query was met with a simple "no," but I decided to follow up by asking why she felt that way. "Because everyone should have a toy to play with."

So if you celebrate Christmas, Hanukkah, Kwanzaa, or Three Kings' Day, you have a right to have it recognized, even if it isn't by name. Happy holidays is a good way to do it.

I finally asked my daughter, "What do you say when people say nice things to you?"

GIF from "The Office."

Merry Christmas, happy Hanukkah, or happy holidays are all pleasantries. There's nothing remotely hostile in those words. Sure, they may not be the words that some would choose to receive, but they're far from insults.

Can we please stop acting like it's some sort of attack on humanity? Because it's really not.

Final note to the lady at the supermarket: I'm going to teach my daughter to be inclusive and kind.

I understand where you're coming from. You really like marinara sauce and it's pretty much all you've eaten in your lifetime. Sometimes change can be hard. I get that (took me two years to wean myself off ranch).

But we shouldn't cling to our old habits just because we don't feel like changing. We need to make the most out of our time here and connect with the people we meet. That way, the mozzarella sticks will taste better for everyone.

Would Bob Dylan by another name still sing as sweet? Lost letters and interviews from Dylan are up for auction at Boston-based RR Auction, and they reveal a rare insight into the legendary singer's feelings on anti-Semitism as well as his name change.

The archives include transcripts of interviews between Dylan and American blues artist Tony Glover conducted in 1971, as well as letters exchanged between the two musicians. Some of the 37 typed pages are scrawled with handwritten notes from Dylan. "In many cases, the deletions are more telling than the additions," Bobby Livingston, the auction house's executive vice president said.

Dylan, who was born Robert Zimmerman to Jewish parents in Minnesota, discussed his name change with Glover. "I mean it wouldn't've worked if I'd changed the name to Bob Levy. Or Bob Neuwirth. Or Bob Doughnut," Dylan joked on March 22, 1971.

The Great Barrier Reef in Australia is home to more than 1,500 species of fish, 411 species of coral, along with dozens of other species. But since 1995, it's lost more than half of its corals due to warmer waters and climate change. Recently, one of those pieces of coral has been found. And it's big. It's 1,600 feet tall, to be exact, making it taller than the Empire State Building.

Not only that, but the coral is healthy and thriving. The coral has a healthy ecosystem and a "blizzard of fish," lead scientist Dr. Robin Beaman said per Reuters. "We are surprised and elated by what we have found."

Even better, the coral didn't show any evidence of damage, even though the section of the Great Barrier Reef it was found in experienced bleaching in 2016. Bleaching happens when the water gets too warm, which causes the coral to expel living algae then calcify and turn white.