Most animals don't have grandmas. But elephants do. And what Granny does is awesome. 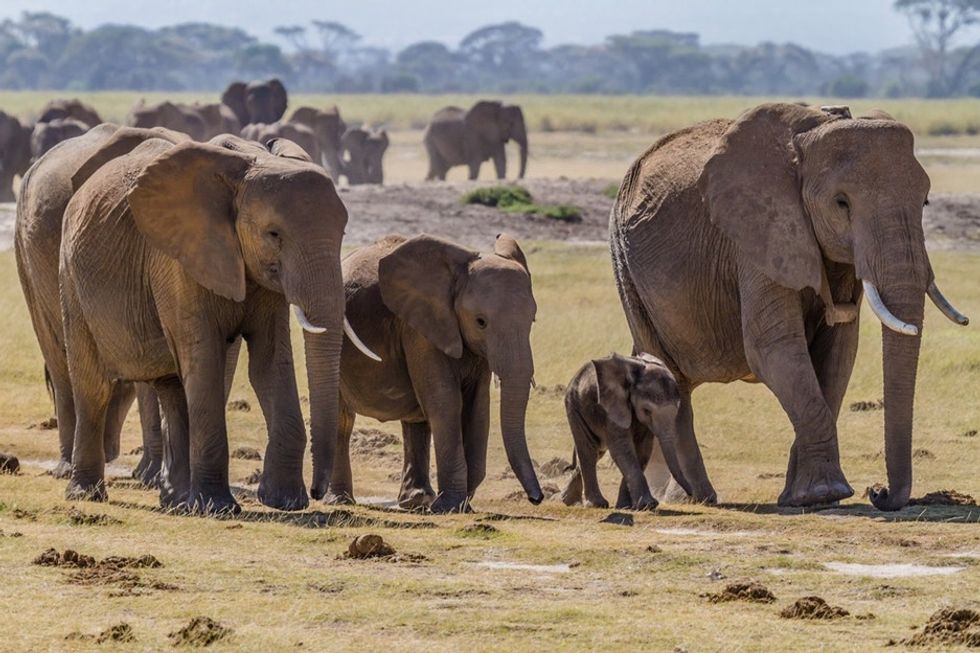 For those of us lucky enough to have grandmas (and grandpas!), we know they can be a blessing.

Grandparents can be sources of wisdom, comfort, or joy. Not to mention that many of us actually grew up with our grandparents — family doesn't just mean a mom and dad raising kids. We're a lot more diverse than that.

In fact, the percentage of kids living in households run by a grandparent has more than doubled from about 3% in the 1970s to about 7% now — that's more than 5 million grandkids, as of 2012, getting the care they need.

So I think it's fair to say we're really lucky to have grandparents.

You know who else is really lucky to have a grandma? This little guy.

Turns out that elephant grandmas are very important too!

Elephants often live in large families made up of babies, juveniles, and females. They're often led by the oldest of these females, which often have a really important social role in their families.

Professor Phyllis Lee wanted to know more about how these families worked. And in her research, she found something surprising — having a grandma made a huge difference in whether a new baby survived.

"It was an unexpected finding for us," said Lee. "We didn't think we'd find that very positive relationship between having a grandmother present and how well the daughters were doing in terms of reproduction."

Only a handful of animals — mostly humans and other primates, whales, and elephants — get to have grandmas.

For most animals, living and having babies are tied together; you basically only stop having babies when you die. This makes animals like elephants, which can live long after they're done reproducing, pretty rare.

Part of the reason elephants are special comes from the fact that they live so long. They can live up to 70 years! Many other animals simply don't live long enough to really see their children's children.

But even if they do, other animals don't necessarily have any significant bond to the kid. You don't see millipede grandmas, for example.

In fact, in many species, the mom and grandmother will end up fighting each other for resources if they're in the same area. But not in elephants.

(By the way, sorry Grandpa, but there aren't really any male equivalents here. Male elephants tend to go off on their own after they reach puberty. And though they can live long enough to see their children's children, they don't really have a family role. Which, when you think about it, just makes human grandpas even more special.)

It's not unusual for the entire herd to help raise a new baby, even if it's not directly related to them. Image from Brenda/Flickr.

What do elephant grandmas do for their families?

Elephant grandmas help protect the baby, keep track of it, and help it if it gets stuck.

Grandmas are also often the boss of the family, too. They can lead the family to the right places to forage or drink or lead the way when interacting with other elephant families.

Knowing where to find water can be really important on the savanna. Image from ninara/Flickr.

Part of what made Lee's study special was the place they worked and the sheer amount of data they used.

Lee looked at data from more than 800 individual elephants in Kenya's Amboseli National Park. Researchers have been watching elephants in Amboseli for more than four decades.

That's the kind of records you need when you study an animal that can live as long as a human.

"We're only halfway there, we need another 40 years of data," said Lee.

Her work is also interesting because it could give us hints about our own species – like why we go through menopause, for example. It was published in Springer's journal Behavioral Ecology and Sociobiology.

Animals can have families just as complex and diverse as our own.

Next time you meet someone who grew up with their grandma, let them know that they're like an elephant.

All of this makes me want to give a certain someone a hug.