Meet 4 moms who created the one toy they wish they had as kids. 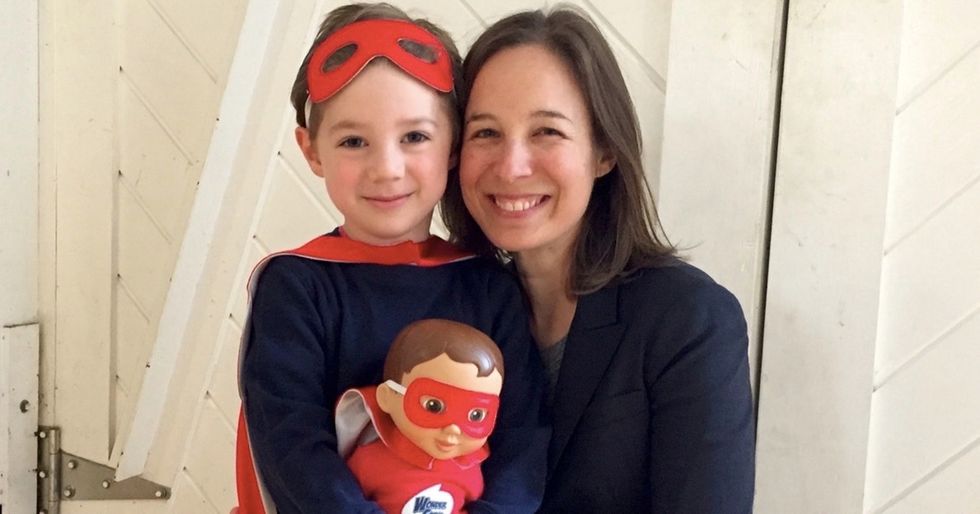 Being told that girls are weak and soft and that boys are aggressive and unemotional is about as played out as the Macarena and Harlem Shake. Yet, it still happens often in our society.

We've all witnessed gender stereotyping in our daily lives, but what impact does it have on our children?

Studies show that stereotypes can significantly limit a child's full potential and happiness by ignoring who they truly are in order to "fit in" to what society expects of them.

The world can be a confusing place for our children at times. Image via iStock.

But there is some good news, and it comes in the form of toys, which are scientifically proven to help kids learn.

Here's the story behind four cool toy companies you may not have heard of that are shattering stereotypes and helping kids believe they can be anything they want to be.

1. For mom and psychotherapist Laurel Wider, it all started when she heard her son say boys aren't supposed to cry.

The market is full of toys that encourage little girls to express empathy and emotions, but what about the boys? Wider felt she had to do her part to help little boys embrace their sensitive sides.

Enter Wonder Crew. Each 15-inch doll combines the adventure of an action figure with the emotional connection of a stuffed animal. Guess what? Little boys love them.

Boys can be nurturing, too. Photo from Wonder Crew, used with permission.

"Wonder Crew is a part of a new conversation about boys' potential and how feelings and connection are a valued piece of their identity," Wider told Upworthy. "I wanted to create a play experience that empowers them to go anywhere and be anything."

Even if that means being a chef or a superhero.

2. When Alice Brooks was 8 years old, she asked her dad for a doll for Christmas and received a saw instead.

She used that saw to build her own doll out of wood and nails — and 10 years later, she went on to study mechanical engineering at MIT and Stanford.

That's what led Brooks to create Roominate, a line of building sets designed for girls in order to bridge the gender gap in science, technology, engineering, and math (STEM) fields. Once her company received funding on the hit TV show "Shark Tank," the rest was history.

News flash: Girls like to build stuff, too. Photo from Roominate, used with permission.

"I was lucky that I found my passion at such a young age, but so many girls never think about engineering as an option for them," Brooks told Upworthy. "I believe we need to give girls more options so they can find what truly interests them."

3. Julie Kerwin is a woman who loves superheroes, but she wasn't digging what was out there — especially for little girls.

Her company IAmElemental aims to reinvent the superhero game by creating female action figures that are focused more on powers than looks. She believes that opens up a whole new form of play for little girls.

"By making females the protagonists of their own empowering stories, you can change the way they think about themselves and the world around them," Kerwin told Upworthy.

As a mom of two sons, Kerwin is also quick to point out that IAmElemental is "girl targeted, boy inclusive." That's because she understands the value of teaching boys to see (and play with) strong female action figures.

"We cannot move towards gender equality if we don't teach boys what it means to be a powerful woman," she said.

4. Jodi Norgaard never wanted to go into the toy business, but she took matters into her own hands for the sake of her young daughter.

That's not to say that there's anything wrong with fashion and princesses, of course. It's just that Norgaard wanted to give girls more options than what was available.

"Girls are strong, smart, and adventurous — but instead, many toys geared towards them are focused on how they should look," Norgaard told Upworthy. "Girls love sports and we need more representation of that."

Because in today's world, the word "beautiful" has many definitions.

In order to truly make the world a happier place, we should teach our kids that they can be whatever they want to be — without limitations.

Thankfully, many of the larger companies are getting the memo as well. For example, Lego, usually known as a toy for boys, recently introduced Lego Friends, and little girls love them.

Even though more work needs to be done to change gender stereotypes, it's nice to know that we're heading in the right direction.

So when little Susie says she wants to be a computer programmer when she grows up while little Johnny says he wants to be a nurse, we should just smile and say, "Go for it."