Local anchors had to read a sneakily pro-Trump script on-air. This is scary. 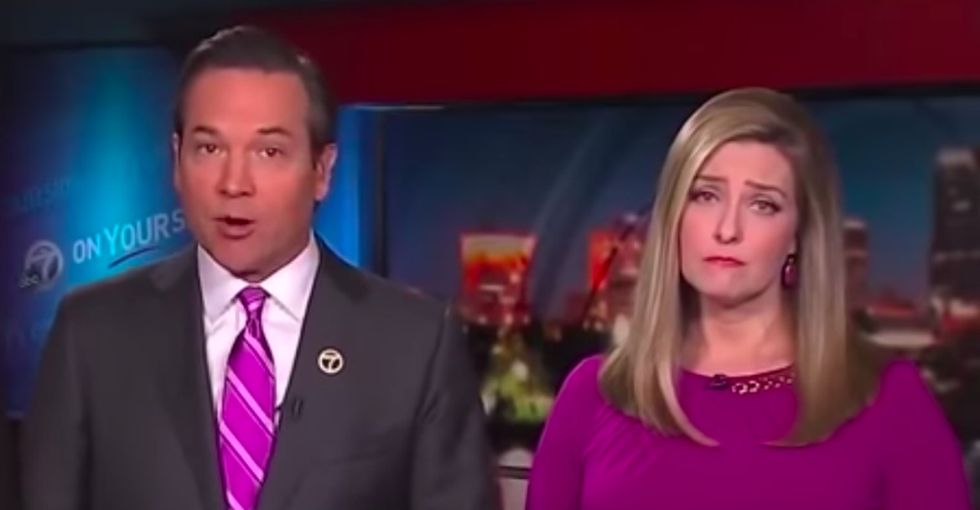 There’s a curious video going around featuring several local news anchors reading from an identical script. “We’re concerned about the troubling trend of irresponsible, one-sided news stories plaguing our country,” the reporters say in their recorded segments. “The sharing of biased and false news has become all too common on social media.”

Watch the video yourself (story continues below):

So, what exactly did you just watch?

Telecommunications giant Sinclair Broadcast Group recently required local stations to produce and air a segment slamming the “fake stories” and “false news” their viewers are consuming via other media outlets.

Do the terms “fake stories” and “false news” ring a bell?

Yes, they echo President Donald Trump’s debunked claims that the “fake news” media is hellbent on destroying his administration.

And no, that’s definitely not a coincidence.

The video above, edited and published by Deadspin, was a mash-up of several Sinclair affiliates airing this disturbing segment.

“Sinclair’s probably the most dangerous company most people have never heard of,” Michael Copps, the George W. Bush-appointed former chairman of FCC, told The Guardian in August 2017.

While Sinclair may not be a household name, most households have been swayed by the company. It’s the largest broadcast news corporation in the U.S., owning or operating nearly 200 stations coast-to-coast. And if a new move to obtain Tribune Media is approved — which is likely under the Trump administration — Sinclair will be able to reach at least 70% of U.S. households.

For what it’s worth, many journalists working for Sinclair stations have spoken out anonymously against these script-reading requirements, slamming them as “manipulative” of their viewers. Others have expressed how difficult it is for TV anchors to quit; according to one Sinclair reporter, they can often be forced to pay a hefty sum (as much as 40%!) if they quit before their contract is up.

Two particularly disturbing ideas are sneakily pushed onto viewers through these segments.

One is that the Sinclair reporters have been forced to promote the White House narrative that much of the media is biased — and therefore, cannot be trusted. “Unfortunately, some members of the media use their platforms to push their own personal bias and agenda to control exactly what people think,” the reporters say in the segment. “This is extremely dangerous to a democracy.”

The script doesn’t name particular reports or specific, untrustworthy sources as being inaccurate. It vaguely describes ”some members of the media” as having ulterior motives, intentionally sowing doubt in the broader free press.

Secondly, the script suggests to the viewer that only the conservative Sinclair stations — unlike its competitors or other sources — are the truly trustworthy ones.

”It’s our responsibility to pursue and report the truth,” the script reads. ”We understand truth is neither politically left nor right. Our commitment to factual reporting is the foundation of our credibility, now more than ever.”

Except that’s not the case.

”Really, what [Sinclair is] doing is kind of like the Fox [News’] ‘fair and balanced’ slogan,” CNN's Brian Stelter reported. ”It's a way of saying, ‘We’re fair, but everybody else is biased.’ It's taking a page out of Trump's playbook.”

Although disturbing, this mandatory new script-reading isn’t entirely shocking to those who’ve been paying attention.

Sinclair — which hired former Trump advisor Boris Epshteyn as a chief political analyst — has already been slammed for packaging conservative, pro-Trump commentary pieces alongside its news coverage, blurring the lines between opinion segments and fact-based reporting.

Here’s one segment featuring Epshteyn where he defended Trump’s controversial response to the gathering of neo-Nazis in Charlottesville, Virginia, after a white supremacist took the life of innocent protester Heather Heyer:

As Think Progress reported in October 2017:

“Sinclair often defends the must-run segments by arguing that they don’t take up much time, but the short packaging is part of what makes the programming so insidious. They’re slotted into local newscasts easily and not clearly marked as opinion or required programming. The segments run on 174 stations currently owned by Sinclair, which is aggressively expanding.”

What’s more, some have argued Sinclair’s cozy relationship with the Trump White House has allowed the company to skirt around media monopoly regulations as it continues to grow in scope and influence, The Guardian reported.

Where do we draw the line?

You can watch below:

Click here to see if you watch a local news affiliate owned or operated by Sinclair Broadcast Group.