Lena Dunham is glad you can see her cellulite on Glamour magazine. 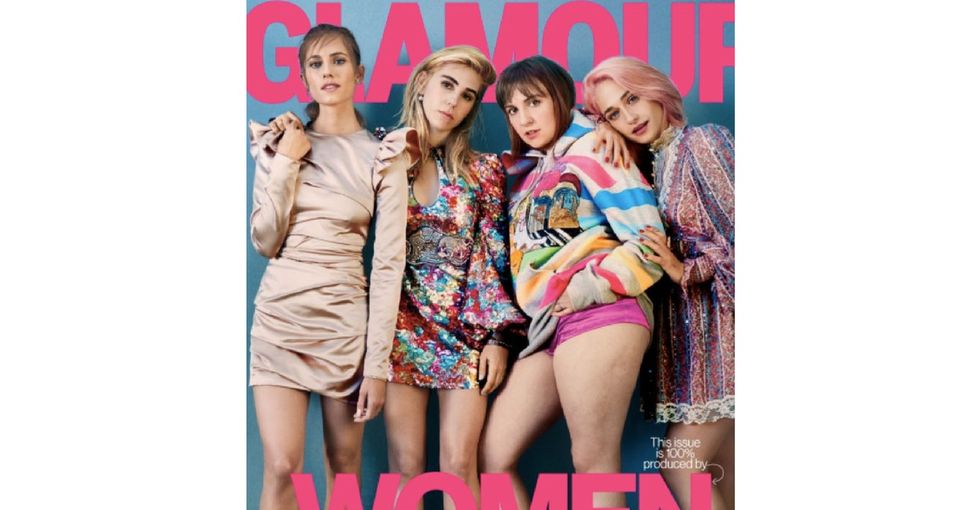 Lena Dunham will be the first to tell you she used to have a potbelly, rabbit teeth, and knock-knees as a kid.

She didn't mind — but she cared that others did. People thought she was "funny looking."

Photo by Dimitrios Kambouris/Getty Images for Endometriosis Foundation of America.

Dunham, creator and star of HBO's "Girls," has long been an outspoken — albeit controversial — champion for body positivity and women's rights. She's found herself in hot water on more than one occasion (and has plenty of non-fans to prove it), but still — it's difficult not to celebrate the underlying message of her Instagram post on Jan. 3, 2016.

In promoting the final season of her show, Dunham and the other "girls" were on the cover of Glamour magazine — without Photoshop.

"Thank you to [Glamour] for letting my cellulite do the damn thing on news stands everywhere today," Dunham wrote.

The magazine confirmed with Upworthy that none of the women on the cover were photoshopped.

The February 2017 issue was also "100% produced by women" — an initiative to allow more women to be the visual and editorial creators behind the content women read and consume (makes sense, right?).

"Every story and every photo, from first page to last, was created by women," according to Glamour.

The magazine publishing world has a lot of work to do in making sure every woman — regardless of dress size, body shape, and skin color — feels like there's a place for her in it.

It was just last April when the same Glamour magazine bungled the concept of plus-size labeling, including actor Amy Schumer under the genre without her approval. The comedian said herself she wears between a size 6 and size 8, while plus-size clothing starts at size 12.

It was a move that, as editor-in-chief Cindi Leive later clarified, wasn't the intended implication, but the damage was already done.

Photo by Christopher Polk/Getty Images for The Critics' Choice Awards.

"I think there's nothing wrong with being plus size. Beautiful healthy women," Schumer wrote in her response. "[Glamour] put me in their plus size only issue without asking or letting me know and it doesn't feel right to me. Young girls seeing my body type thinking that is plus size? What are your thoughts? Mine are not cool glamour not glamourous."

Dunham's cover is a small victory within an industry that's slowly but surely evolving for the better.

"Today this body is on the cover of a magazine that millions of women will read, without photoshop, my thigh on full imperfect display," Dunham wrote in her post. "Whether you agree with my politics, like my show or connect to what I do, it doesn't matter — my body isn't fair game. No one's is, no matter their size, color, gender identity, and there's a place for us all in popular culture to be recognized as beautiful."