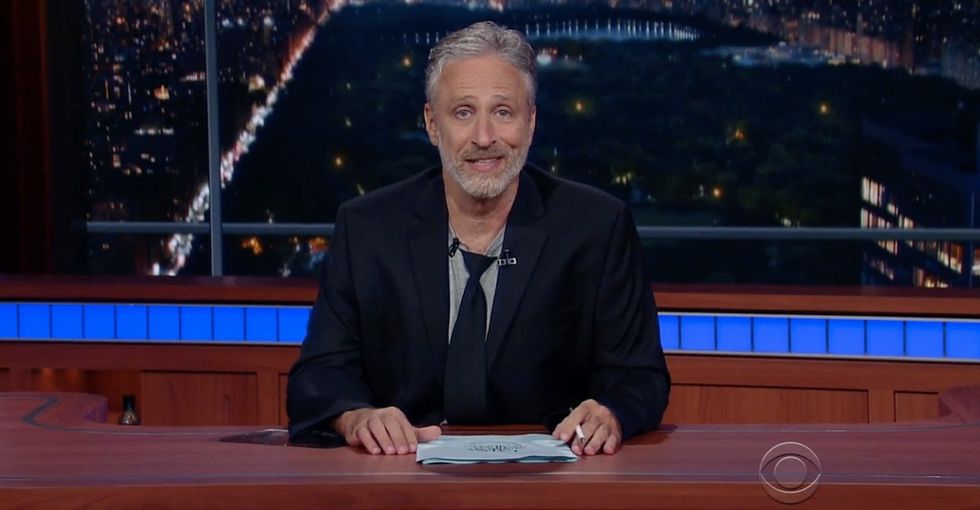 Can you believe it's been nearly a year since Jon Stewart said goodbye to "The Daily Show"?

And what a year it's been! With election season coming down the home stretch, it feels odd not to see the former host offering his take on some of the campaigns' more absurd moments (and oh, have there been many of those).

Last night, Stewart returned to late-night TV for one night to deliver an important message to the American people.

He stopped by "The Late Show with Stephen Colbert" and gave an epic, 13-minute, mic-drop epilogue to this week's Republican National Convention. And no matter what party you're affiliated with, it's an epilogue you'll want to hear.

Images from "The Late Show with Stephen Colbert"/YouTube.

His message was simple but necessary: Today's politics of division aren't sustainable.

And while many politicians claim they stand for unity, they undermine that with platforms built around inequity.

Stewart called out the rhetoric of the RNC specifically because of its divisive language about immigrants, racial minorities, LGBTQ people, and women.

"You feel that you're this country's rightful owners," Stewart said of the idea that the status quo enables discrimination.

Stewart's words might seem a bit partisan, but arguing for inclusion is arguing for humanity, no matter what political party you're in.

Honesty, inclusion, and equality are core tenets of humankind. And like Stewart said, we should put our trust in leaders who stand for those ideals.

That's what matters in — and is missing from — the current state of politics. That's what the future children of America need.