Jimmy Kimmel thanks hospitals for saving his son, slams Trump in teary opener.

The late-night TV host's story might change how you think about our health care system. 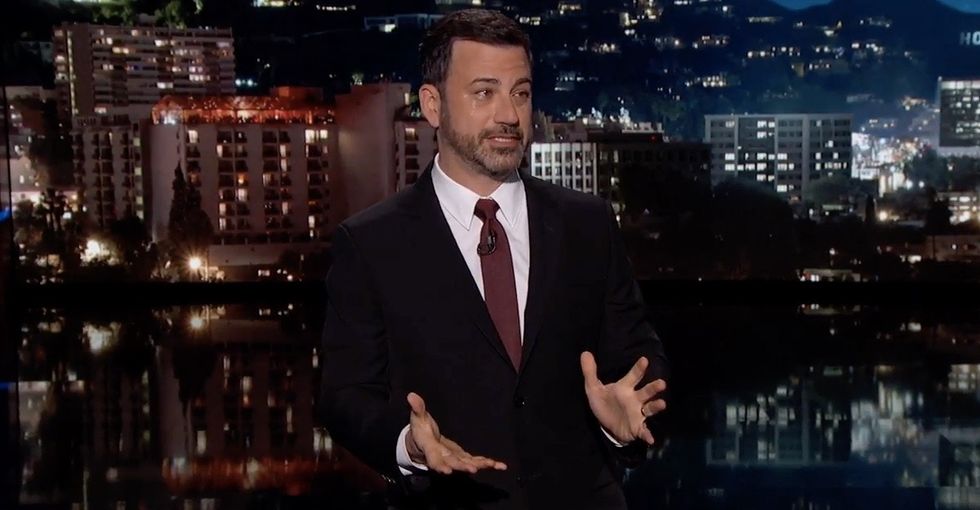 His voice breaking and tears welling up in his eyes, Jimmy Kimmel delivered the most compelling 13-minute monologue of his career.

"I have a story to tell about something that happened to our family last week," he said at the top of his show on May 1, 2017. "Before I go into it, I want you to know it has a happy ending."

The most powerful and poignant part of Kimmel's monologue comes at the end.

"We were brought up to believe that we live in the greatest country in the world," Kimmel said, choking back tears about 10 minutes into the clip.

"But until a few years ago, millions and millions of us had no access to health insurance at all. You know, before 2014, if you were born with congenital heart disease, like my son was, there’s a good chance you’d never be able to get health insurance because you had a pre-existing condition."

Kimmel is a millionaire many, many times over, and as such, he can afford just about any medical treatment in existence. But whether or not a newborn baby deserves to live shouldn't hinge on that baby's parent's paycheck.

"If your baby is going to die and it doesn’t have to, it shouldn’t matter how much money you make. I think that’s something that whether you’re a Republican or a Democrat or something else, we all agree on that, right?"

"We need to make sure that the people who represent us and people are meeting about this right now in Washington understand that very clearly. Let’s stop with the nonsense. This isn’t football. There are no teams. We are the team. It’s the United States. Don’t let their partisan squabbles divide us on something every decent person wants."

"We need to take care of each other," he concluded. "No parent should ever have to decide if they can afford to save their child’s life. It just shouldn’t happen. Not here."

As Congress considers a major health care overhaul that could leave those like Kimmel's son vulnerable, his emotional message has the power to change everything.

"We need to take care of each other. No parent should ever have to decide if they can afford to save their child’s life. It just shouldn’t happen. Not here."

As Kimmel said through tears, this isn't about him or his son, but those less financially fortunate. It's a truly must-watch piece of TV.

Keep Reading Show less
Get stories worth sharing delivered to your inbox
By signing up you agree to Upworthy's privacy policy.
Trending Stories
disabilities