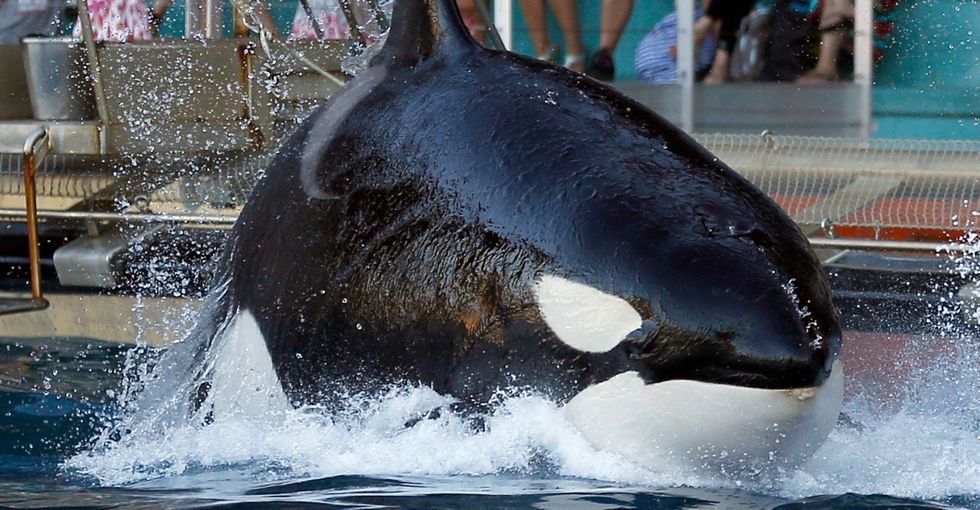 At a concert in July, One Direction's Harry Styles hit fans with some real talk.

You heard him ladies and gents. Don't go to sea world! 🚨🚨🚨 Please follow @Dolphin_Project + for more info please check out www.dolphinproject.com
A video posted by @maisie_williams on Jul 10, 2015 at 9:22am PDT

Although it's not every day you see a world-famous teen heartthrob taking on a massive theme park corporation, Styles' comments didn't just come out of nowhere.

In 2013, the controversial documentary "Blackfish" made some shocking claims about SeaWorld.

Namely, that SeaWorld lies to its guests about the health of its sea mammals, that orcas at SeaWorld have shorter lifespans than wild orcas, and that captivity can create conditions for mental illness — and incite violent behavior — in killer whales.

After the movie came out, SeaWorld spent a lot of money on an ad campaign to convince people that things are actually all hunky-dory with their killer whales.

A spot posted to YouTube in April claims that SeaWorld hasn't trapped orcas in the wild for over three decades, and that, contra "Blackfish," their captive orcas live "just as long" as their free brethren.

But Styles wasn't buying it, and for the most part, he's right not to.

Although it's true that SeaWorld hasn't captured any wild orcas for over 35 years, their claim that their captive orcas live just as long as wild orcas doesn't really hold up under scrutiny. The median life expectancy for killer whales at SeaWorld is indeed about on par with the median life expectancy for non-captive orcas — 30-50 years — by some estimates. But that doesn't give us the whole story.

According to a joint report by the Tampa Bay Times and Miami Herald, the biologist SeaWorld relies on for its statistics — Douglas DeMaster — admits that the company is only looking at one specific chunk of time, rather than all the available data. In the same report, Dutch biologist Jaap van der Toom clarifies that "longevity is basically an incremental finding" and it all depends on how the statistics are phrased. So, taken another way, the same numbers show that nearly 33% of SeaWorld's orcas die within eight years of their arrival.

And that's not the only regrettable message SeaWorld has sent to try to wiggle out of the bad publicity. In response to "Blackfish's" allegation that the orca who killed SeaWorld trainer Dawn Brancheau was driven psychotic by years in captivity, a top executive at SeaWorld countered by blaming Brancheau for her own death.

Even for a company in free fall, July 2015 was an especially bad month for SeaWorld, and Styles' comments were a big reason why.

According to The Guardian, Styles' boycott call, along with accusations that a SeaWorld employee tried to infiltrate the People for the Ethical Treatment of Animals (PETA), "led to a 400% increase in online comments about SeaWorld in July, more than 2.5m, the vast majority of which were negative."

SeaWorld is learning a hard lesson.