Iceland just announced a no-nonsense plan to eliminate its wage gap in 5 years. 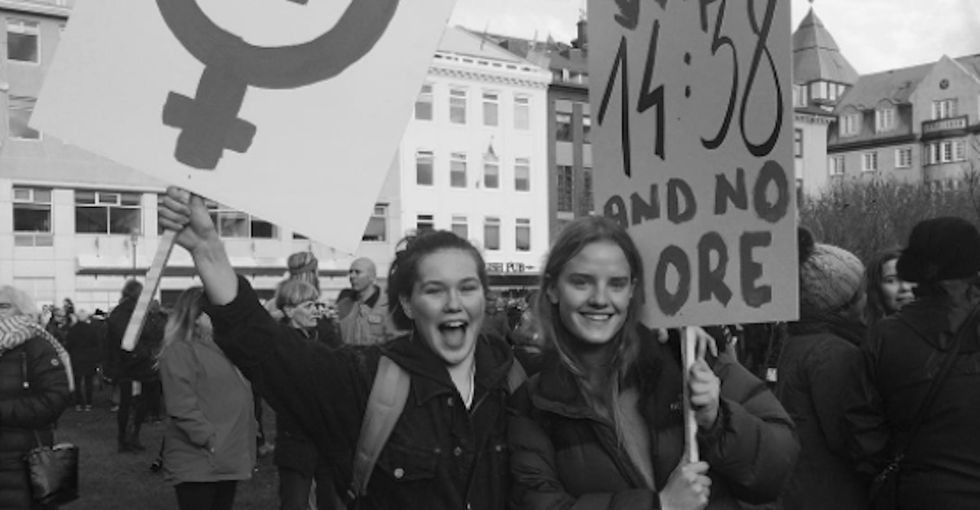 At the time, the country's men were earning an average of 18% more for doing the same jobs.

So women decided they were going to work 18% fewer hours (hence walking off the job at 2:38 p.m.) for a day to prove a powerful point.

Thousands took off early and poured into the streets to voice their displeasure with the wage gap (which, hey, is actually a lot better than in most of the world but still needs to be fixed).

In early March 2017, not even five months later, things may finally be changing, in no small part thanks to the work of these protestors.

Government officials in Iceland just announced new legislation that would require companies to open their books and prove they're providing equal pay for equal work.

According to USA Today, the measure is expected to be approved by parliament because lawmakers across the political spectrum all agree that the wage gap needs to be fixed ASAP.

(That must be nice.)

"Equal rights are human rights," said Social Affairs and Equality Minister Thorsteinn Viglundsson. "We need to make sure that men and women enjoy equal opportunity in the workplace. It is our responsibility to take every measure to achieve that."

Iceland won't be the first nation to enforce equal pay, but its policy is considered to be one of the most aggressive yet as it targets any company, public or private, with at least 25 employees.

The government is hoping measures like this one will help to completely eradicate the pay gap in the next five years.

This is a massive victory, not just for women, but for the power of engaged citizens who refuse to accept inequality.

The news out of Iceland comes hot off the heels of A Day Without a Woman, which called for women all over the world to strike — from work, from home duties, from the multitude of tasks they juggle day in and day out — to make their value known to the world in no uncertain terms.

Critics of the strike questioned its ability to make a difference since turnout would be smaller and more scattered than the massive Women's March that took place shortly after Inauguration Day.

But the citizens of Iceland are proof-positive that public demonstrations can and do work. It sounds trite, but when enough people come together to make their voices heard, people in power have no choice but to listen. Even if it seems like they're not.

Change may not happen overnight, or even in five months as it did in Iceland, but as the saying goes, "The arc of the moral universe is long, but it bends toward justice."