His daughter broke down onstage, so he came to her rescue. And the video is adorable. 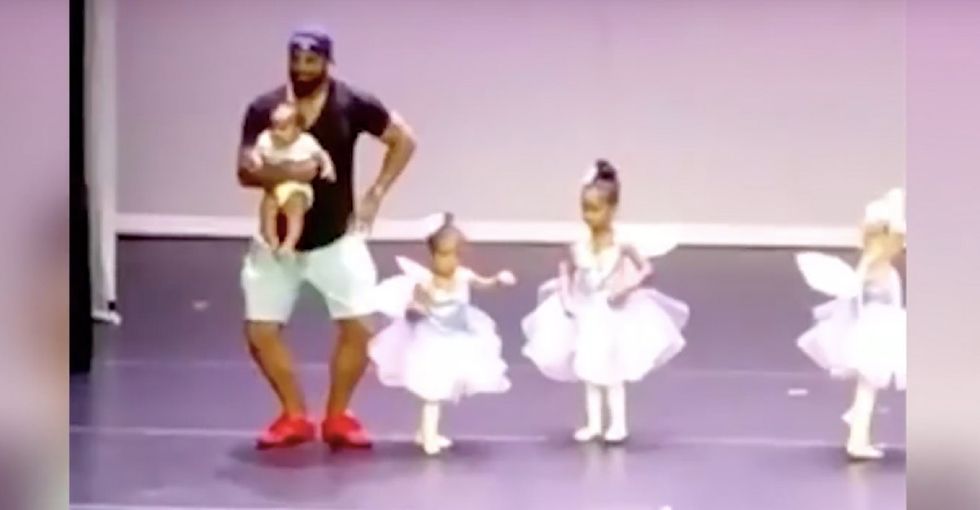 A dancing dad has the internet jumping for joy.

Marc Daniels is a criminal lawyer by day and a twirling ballet dad by night.

When his 2-year-old daughter Isabella lost it onstage during a ballet dress rehearsal, Daniels saved the day — and the internet went wild.

Shortly after walking onstage with her fellow dancers, Isabella crumpled to the floor in a heap of tears. At first, Daniels tried to comfort her from the wings, but she was inconsolable. So he stepped onto the stage, took her hand, and started following the steps the teacher was doing.

In Motion Dads are the best 💕Sometimes, you simply need your dad on stage to help bring out your inner ballerina! Check out the full video on our page! In Motion School of Dance#dressrehearsal #inmotionschoolofdancebda #dancedad #innerballerina #dadscandance #teamimsd #jointheinmotionfamily

Isabella calmed right down and they completed the dance together. And the best part? Daniels did it all while holding a baby. Swoon.

Beyond just being sweet, Daniels' swift action was #ParentingGoals.

Daniels is the father of three little girls. Isabella's breakdown could have been handled many different ways, but this video plays out like a master class in supportive parenting.

"I just wanted to make sure my daughter was calm and felt comfortable," Daniels told The Royal Gazette.

1. He tried a couple of different tacks to see what would help his daughter succeed.

Encouraging her from offstage was wise, giving her the chance to calm down on her own. But when that didn't work, he didn't hesitate to stand by her side. He clearly knows his daughter well and did what he needed to help her make it through her performance.

Whether Isabella was scared or embarrassed or just having a toddler outburst because she's 2, Daniels showed her how to focus on the fun of it all. He was unabashed about dancing ballet in front of a crowd, even though he'd never done it. And he gave it his all. Seeing her dad being brave undoubtedly helped her be brave herself.

3. He showed he had confidence in her.

Daniels could have taken his daughter offstage to help her calm down, which would've been a reasonable parenting choice. But by staying on the stage with her, he showed that he knew she could do it. That's a powerful message — and not always an easy one to convey under pressure.

Hands down, the best part of this video is that Daniels helps his daughter and completes a ballet routine, all while holding his baby daughter Suri in his arms. He even declines someone's offer to hold the baby while he's dancing. His "nah, I've got this" demeanor shows that he's used to being an engaged, hands-on dad and that he can multitask like a pro.