Here's who Trump should've pardoned instead of a bully who mocked the Parkland victims. 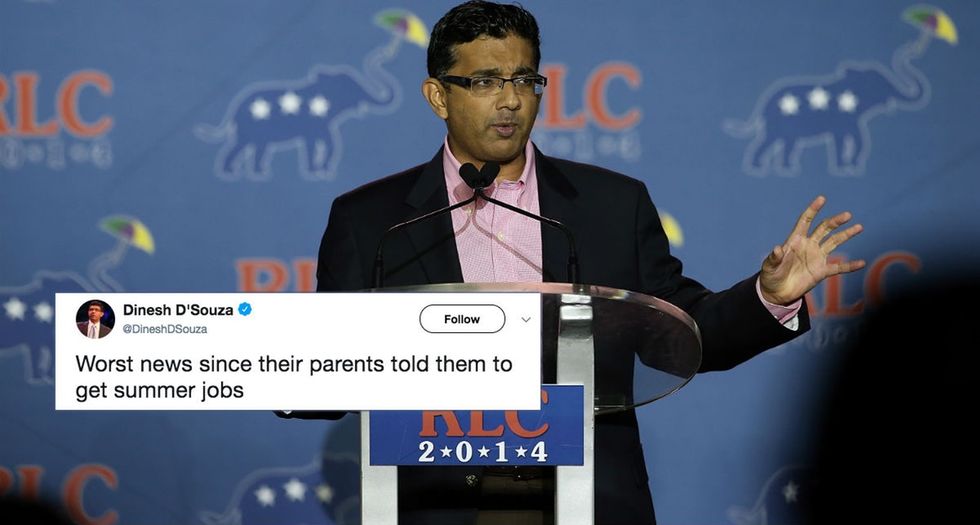 Out of all the people Trump could pardon, Dinesh D'Souza is a terrible choice.

The conservative writer has become a pariah across the political spectrum. To many he is best known for a series of incredibly offensive tweets in the aftermath of the Parkland school shootings.

In the wake of those comments, even the highly partisan Conservative Political Action Committee dropped him from their roster of speakers, calling his actions "indefensible."

Once seen as a promising young intellectual, D'Souza has become a lightning rod for controversy over the years. For instance, he wrote and narrated documentaries on President Barack Obama and Hillary Clinton that critics said were loaded with conspiracy theories and light on facts.

He also pleaded guilty to making illegal financial contributions to a U.S. Senate campaign in 2012, the crime for which Trump has now officially pardoned him.

Will be giving a Full Pardon to Dinesh D’Souza today. He was treated very unfairly by our government!
— Donald J. Trump (@Donald J. Trump)1527772715.0

The announcement was met with near-universal scorn from both sides of the political aisle and members of the media.

The announcement comes one day after a White House visit on prison reform.

There was no shortage of jokes about Kim Kardashian West's visit to the White House on May 30. But she was there to discuss the very legitimate issue of prison reform, a subject that has surprisingly gained bipartisan support in recent years. Just this May, the Republican-led Congress passed a prison reform bill that is now in front of the U.S. Senate.

If Trump had wanted to make a big splash, he could have announced a pardon for Alice Marie Johnson, who was reportedly a central focus on Kardashian West's pitch to the president. Johnson is a 63-year-old grandmother currently serving a life sentence without the possibility of parole for a non-violent drug offense.

As one of Johnson's lawyers, Brittany Barnett, said, "The message to the president is that Alice Johnson, the 21 years she has been in prison, represents a punishment that more than pays her debt to society and that to keep her prison the rest of her life is morally and economically unjustifiable."

Trump himself has signaled support for prison reform, saying that the newest bill should "restore the rule of law, keep dangerous criminals off our street, and help inmates get a second chance on life."

And a great way for him to put meaning behind such statements would be to pardon people like Johnson.

The presidential pardon is a powerful tool. Now is a great time to use it for real justice.

It's not unusual for presidents to be criticized for their presidential pardons: Nearly every president in modern history has been dinged for their sometimes questionable choices in the administration of selective mercy.

With the growing pressure to do something about prison reform, Trump could make a bold, bipartisan statement by pardoning incarcerated individuals like Johnson, who have faced punishments that greatly exceed their crimes.

It's hard to not be outraged by D'Souza's pardon.

But as long as Trump's feeling generous, perhaps enough political pressure could result in acts of mercy we can all feel good about.