He walked 20 miles to his first day of work. Here's what happened when his boss found out. 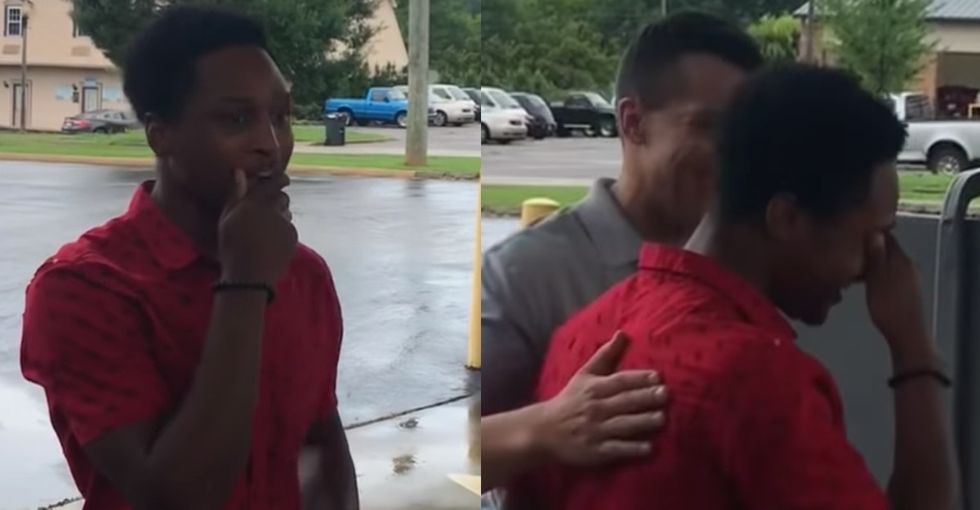 Walter Carr was all set for his first day of a new job, but then his car broke down 20 miles from work.

With the car dead and his new job with a moving company called Bellhops on the line, Carr knew he only had one choice: to walk. So after taking a four-hour nap to give him strength, the Birmingham, Alabama, resident started the long walk to work at midnight.

It took him another four hours to get to his destination.

At 3 a.m., several officers saw Carr walking through a neighborhood and stopped to ask where we was going.

After Carr told them about his journey, the officers took him to breakfast and then to a church, where they thought he'd have a safe place to rest until his job started.

But not wanting to be late for the first moving job of the day, Carr took off for Jenny and Chris Lamey's home. Another officer — who'd just come on the clock and heard Carr's story — picked him up and drove him the rest of the way.

By 6:30 a.m., the Lameys got a knock at their door. Carr had made it to work and was ready to move their household. Carr put in a full day, refusing even a short nap before he started.

Jenny Lamey, so impressed with Carr's perseverance, shared the story on Facebook. The post has since gone viral, amassing hundreds of shares.

Somehow my original post was deleted. Here is it again!! I am overwhelmed that it was shared over 800 times in one day!...

The CEO of Bellhops caught wind of Carr's journey.

Luke Marklin, the CEO of Bellhops, drove from Tennessee to meet the guy who'd walked 20 miles to get to work. By the end of their meeting, Carr was walking away with something more than just a clap on the shoulder.

Marklin gifted Carr his own car to make sure that he wouldn't have to choose walking over sleeping before work again. Jenny Lamey also contributed, starting a GoFundMe that's raised more than $8,000 for Carr's future.

"I want people to know this: No matter what the challenge is, you can break through the challenge," Carr told AL.com. "Nothing is impossible unless you make it impossible. You can do anything you set your mind to."

Watch Carr get his new car below:

Wear your values with products from PSA Supply Co., an independent site owned by our parent company, GOOD Worldwide Inc. GOOD makes money when you buy these products, and 10% of profits go to The Center for Community Change Action. Use discount code UPWORTHY to get 15% off your first order!
popular