He said, 'I helped to destroy part of the community.' Now he's making it safe again. 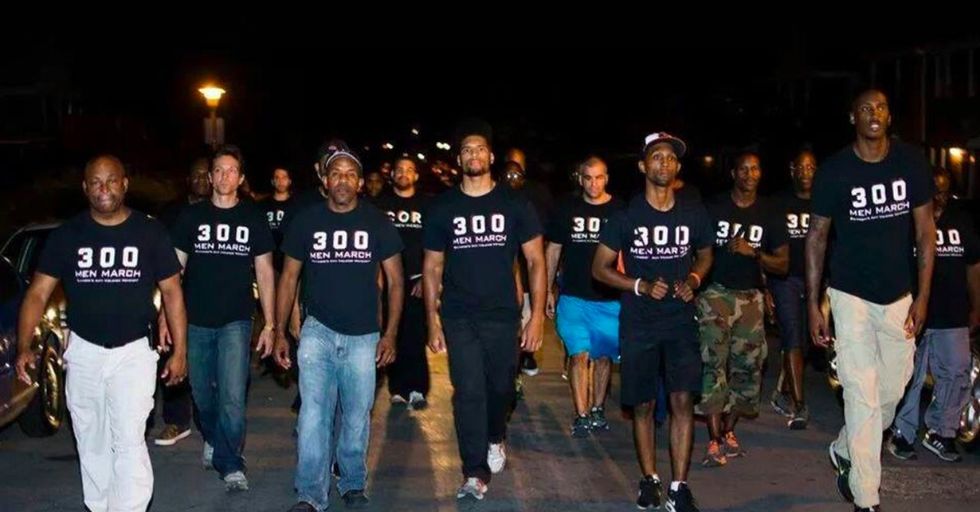 You've heard of the movie "300," where Spartans battle to the death with the Persian army. But you may not have heard of the 300 Men March Movement in Baltimore, started by one man committed to putting an end to community violence. And with more murders than New York, his city desperately needs him right now.

All photos via the 300 Men March Movement.

Munir Bahar, known as Buddha on the streets, was raised in Baltimore. Between the ages of 13 and 20, he was charged with everything from assault to felony drug possession. But, by age 20, he says, "I woke up and I began to understand that I had to educate myself, so I went to college. I also understood that I had to play a role in this community because I helped to destroy part of the community. So now I'm out to help uplift and regenerate a better community, and I'm starting with the youth."

True to his word, Bahar went on to found 300 Youth COR, a violence-prevention program that pays local youth an hourly rate to participate in training sessions that focus on developing physical education and leadership skills.

Shocked by Baltimore's rising homicide rate, Bahar declared his own “state of emergency" in May 2015. He put out the call for men in the community to help save Baltimore's youth. Organized in groups of volunteer street-engagement units, the men canvassed the hardest-hit areas of Baltimore every Friday night.

The goal was simple: engage young men on the streets in the most dangerous neighborhoods and keep their communities safe. That straightforward tactic worked. In the last two years, the 300 Men March Movement noted a substantial decrease in violence in the Bel Air-Edison neighborhood.

In August, Bahar led youth and volunteers on a 35-mile march to the White House to share their message and successful tactics with President Barack Obama. According to the organization's website:

“We want to inspire communities across America that are challenged with high levels of gun violence. We want community residents to be inspired and mobilized with a common mission as their focus. There are many organizations across the nation that have been formed to address gun violence. We believe we must strengthen the network between us, share successes and failures, and offer support where we can."

When they arrived, they were met by an audience of officials from the president's My Brother's Keeper Initiative.

Bahar and the 300 Men March movement are in it for the long haul. Right now, they're raising funds through a GoFundMe campaign in order to grow their community initiatives and employ 120 more youth. Over the course of 52 weeks, Bahar and the 300 Men March plan to replicate the results seen in Bel Air-Edison, reducing the murder rate by 50% in five of the Baltimore neighborhoods most affected by gun violence.

Sure, it's ambitious. But, as Bahar says, love and peaceful resistance can be powerful weapons.

"We come in with love," Bahar told NPR. “And I don't care the hardest, most thorough-est gangster killer, whatever — every human being recognizes love to some degree, especially when it's genuine and when it's pure."