Fox News host reads texts from his liberal Mom that hilariously shame him. 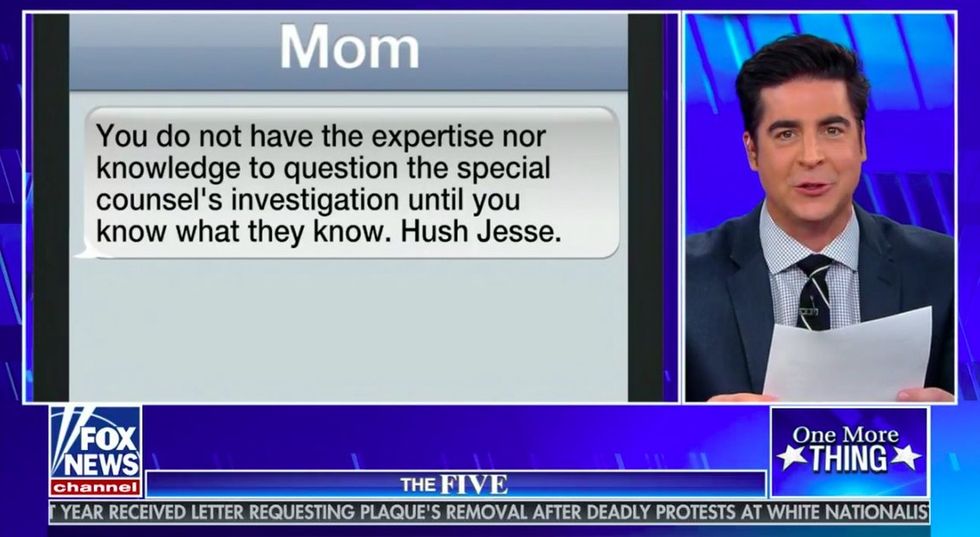 You’ve got to hand it to Fox News Channel host Jesse Watters. The 40-year-old conservative commentator still knows the value of listening to his mom, even when she’s lecturing him about his misguided political views.

And regardless of where you fall on the political spectrum, watching Watters read these text messages on-air to millions of viewers is pure delight.

The unabashed “Trumpet,” as his own mother calls him, read the texts as part of a seemingly ongoing series of “Mom Texts” his mother, Anne Watters, sends to the “The Five” co-host.

The first "Mom Text" he read got right to the point about Robert Mueller’s investigation into Russian interference in the 2016 election.

“Manafort is a criminal,” she wrote in reference to Trump’s former campaign manager Paul Manafort.

But she was far from done. In addition to offering support for the special counsel, she pointed out her son’s distinct lack of qualifications on the matter, texting:

"You do not have the expertise nor the knowledge to question the special counsel's investigation until you know what they know. Hush Jesse.”

“DO NOT accept an offer to be Chief of Staff.”

On the one hand, you've really got to hand it to Jesse Watters for at least having the sense of humor to take a self-deprecating approach to his political views. A lack of self-awareness is something most talking heads on the left and right are guilty of. Even Waters' Fox News employers were getting in on the fun.

But it may be his mom's final text that sums up the challenge he and many of his cohorts face at Fox News these days.

“You end up presenting as lacking a moral compass honey,” she wrote. “We all know you are a Trumpet— you need not scream it."