After peaceful protests over the April 2015 death of Freddie Gray in Baltimore were interrupted by rioting and violence, the city implemented a 10 p.m. curfew to keep its citizens safe. 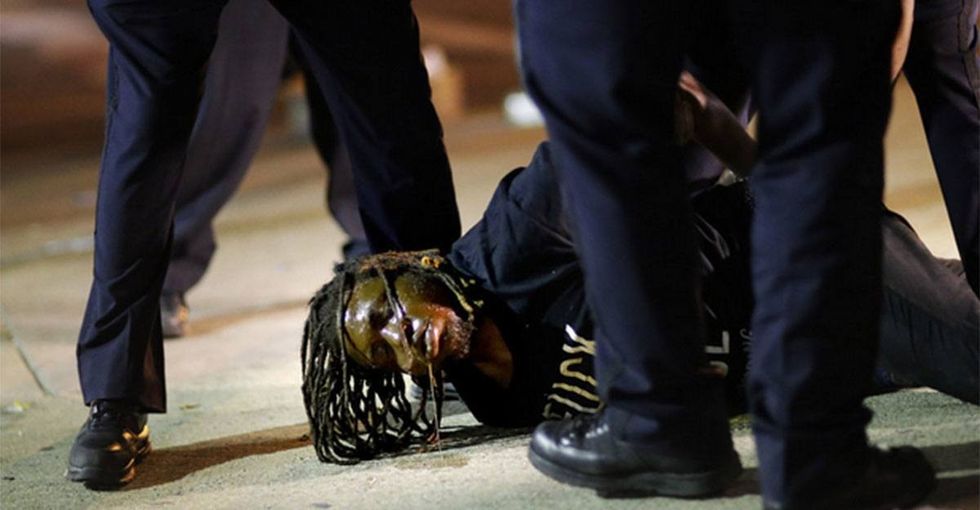 Video footage captured during that time shows how police interacted with white vs. black protesters who were out past curfew. And it isn't pretty.

On May 2, 2015, police officers asked a group of white protesters to go home after curfew.

According to the captions on the video, shot by activist DeRay McKesson, this was the third time the police officers had asked this group to go home.

Now, compare that thoughtful, reasonable, downright compassionate response to how Baltimore police "asked" this peaceful protester to obey the curfew that same evening.

Protestor taken on stretcher after being sprayed, knocked, dragged face down by #Baltimore police. #BaltimoreUprising pic.twitter.com/vtNJvyYD3P
— AJ+ (@ajplus) May 3, 2015

In case you can't (or don't want to) watch, let me summarize: Pepper sprayed. Hair pulled to the ground. Handcuffed. Dragged through the street.

The protester was unarmed and not aggressive. So why the force?

Maybe a side-by-side comparison will help:

There's just no logical reason for the difference in treatment and excessive force.

This tweet from activist Miss Packnett sums up the issue quite poetically:

This curfew looks to be about controlling black pain, black struggle, black voice, black bodies. The white ones got 15 minutes to walk home.
— Miss Packnett (@MsPackyetti) May 3, 2015

Baltimore has a long history of police brutality against black residents, but the contrast here speaks directly to the frustrations black people are experiencing all across the nation and why so many have taken to the streets in protest: unfair, often violent treatment at the hands of the police. Plain and simple.

There is an overwhelming need for police reform in the United States.

But if anything is going to change, we need to see it for what it is and acknowledge the egregious bias and inhuman treatment that far too many Americans are experiencing at the hands of police.

Have some friends who don't believe racism and police brutality are real problems? Pass along this obvious example. And drop the mic.