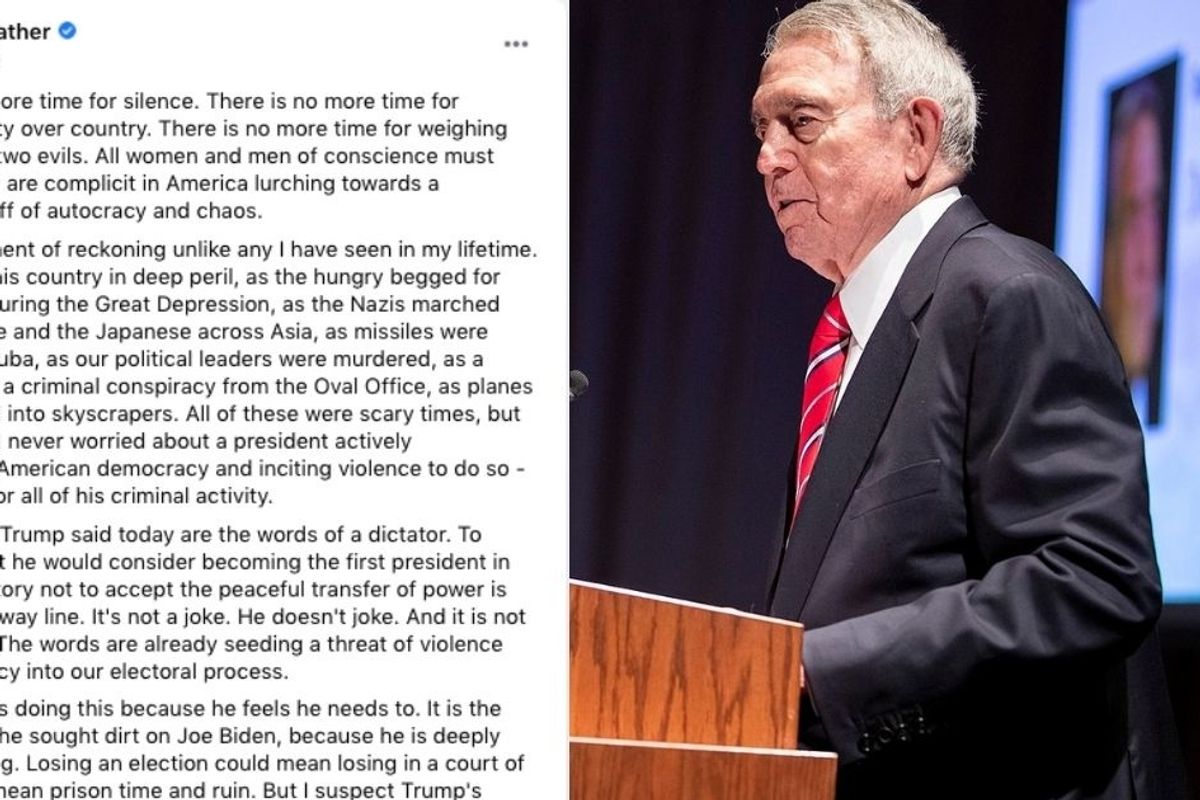 This is a moment of reckoning unlike any I have seen in my lifetime. I have seen this country in deep peril, as the hungry begged for sustenance during the Great Depression, as the Nazis marched across Europe and the Japanese across Asia, as missiles were moved into Cuba, as our political leaders were murdered, as a president ran a criminal conspiracy from the Oval Office, as planes were hijacked into skyscrapers. All of these were scary times, but through it all I never worried about a president actively undermining American democracy and inciting violence to do so - even Nixon, for all of his criminal activity.

What Donald Trump said today are the words of a dictator. To telegraph that he would consider becoming the first president in American history not to accept the peaceful transfer of power is not a throw-away line. It's not a joke. He doesn't joke. And it is not prospective. The words are already seeding a threat of violence and illegitimacy into our electoral process.

I suspect he is doing this because he feels he needs to. It is the same reason he sought dirt on Joe Biden, because he is deeply afraid of losing. Losing an election could mean losing in a court of law. It could mean prison time and ruin. But I suspect Trump's motives are more instinctual. He needs to hold on to power for the sake of power. He cannot lose, even if he has to cheat to win. Even if he has to blow up American democracy. He considers little if any about 200,000 plus deaths from COVID. Why would he care about our Constitution or Bill of Rights?

There is no sugarcoating the dangers and darkness we live in. But I remain heartened that the majority of Americans do not want this. Trump is in danger of losing states that he should be winning handily. Yes, his base is energized and numerous. But so is the opposition. I have seen opposition parties in foreign countries channel the morality of their causes to bring great change. And most of those opposition movements didn't have the strength, power, and resources of those who stand against Donald Trump.

Donald Trump has himself defined the stakes of the election. This is a battle for American democracy as we've known it. We are well past warning shots. Allies across the political spectrum are ringing alarm bells. Right now, all those seeking to defeat Donald Trump know winning a close election may not be enough. The size of a victory will likely matter. Failing that, what happens? I don't know. But I would say we all should try to remain steady. Try to conserve our energy for the battles ahead. Be committed to your community, your country, and your conscience. If enough Americans of decency and courage come together, the future of this nation can be better, fairer, and more just."

Thank you, sir, for reminding us of the true American values that should always be kept front and center, and for keeping us from slipping into despair over what we see happening to our democracy and over how many people seem blind to the reality right in front of them. You are truly a national treasure, Mr. Rather.

From Your Site Articles
Related Articles Around the Web
democracy
popular