What to do when your daughter wants to be Han Solo for Halloween? (He's from Star Wars, if ya don't know.) This dad knows exactly what to do. But then what if she wants you to be Princess Leia? Easy answer. But ... but ... who will be Chewie? The dog, of course. As Tom (the super-cool dad in the pics below) says, "we're dressing our dog up as Chewbacca, and he looks way cooler as a Wookiee than I ever would've." I demand to see pics of the Wookiee dog. Are you with me, people? 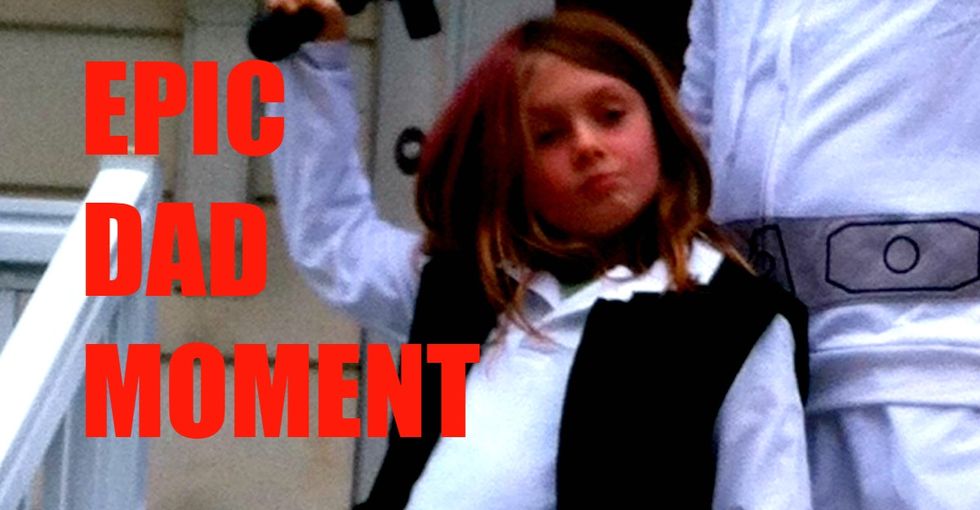 From Tom's article about these amazing photos:

...after I showed my seven-year-old Star Wars for the first time, she turned to me and asked…

“Do you think I could be Han Solo for Halloween?”

Immediately, I responded “Yeah, why, of course, you could. That would be amazing. Why couldn’t you be Han Solo?” And, even though I didn’t want her response to come, it did. “Welll…. I’m a girl.”

Screw that. I grabbed my laptop and started showing her some really excellent examples of other girls and women cosplaying as Han Solo...

My daughter’s eyes went wide. She was sold on the idea. This could happen. But then she turned and looked at me, “But what are you going to be?” She thought for a second and said “Well, if I’m a Han Solo, you should probably be Princess Leia, I guess…” She looked at me with an implied question in her eyes. And, c’mon, if I immediately told her “YES, a girl can be Han Solo,” it would’ve been pretty hypocritical of me to say “Nope, a boy can’t be Princess Leia.” So, as quickly as I could, I said, “That would be FANTASTIC. I totally should be Leia.”

And that’s exactly what I did. Because that’s what dads do.