Check out how one college is teaching students how to prevent rape: with a video game.

"The ONLY way that we can eliminate power-based violence in our society is to focus on why and how it flourishes and exists in a culture." 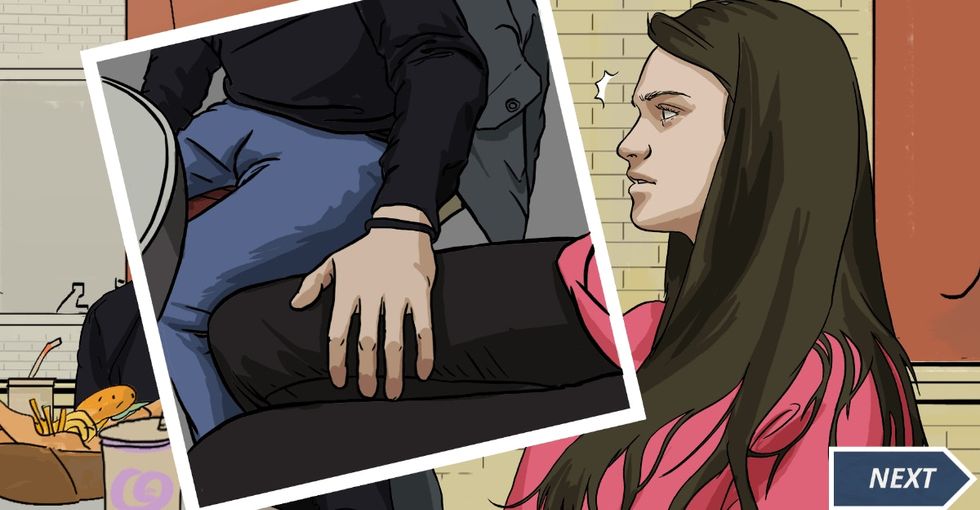 A new game developed at Carnegie Mellon University aims to change the way people react when they witness sexual harassment and violence.

The game is called Decisions That Matter, and it follows a group of college-age friends on the night of a party. Along the way, members of the group face a number of challenges and uncomfortable situations that people of all ages might find themselves in every day, ranging from street harassment to unwelcome advances from a stranger or friend.

In each situation involving harassment or assault, the player must choose how to react.

I spoke over e-mail with CMU's coordinator of gender programs and sexual violence prevention Jess Klein to learn more about the game's history.

Essentially, each semester, a CMU class called Morality Play: Laboratory for Interactive Media and Values Education takes up a cause. Professors Andy Norman and Ralph Vetuccio selected sexual violence prevention as this semester's theme and went to Klein for some assistance.

So many existing "anti-rape" tools put the focus on the victim, and few address the perpetrators and bystanders. They wanted this to be different.

"I was upfront with them from the very beginning with regards to how I felt about 'prevention products,'" Klein said. "The apps, the nail polish, the 'anti-rape' underwear – it's just all too much, and those products ultimately put the onus of prevention on the survivor."

All else aside, the biggest problem with "anti-rape" products that focus on the victim is that they don't address the cause of rape: people who rape.

"Being an active bystander is about intervening long before anything can happen, giving folks the tools to have conversations about sexism, the role of masculinity, rape culture, challenging rape myths, and more." — Jess Klein of Carnegie Mellon University

A focus on primary prevention needs to include educational tools for bystanders and witnesses.

"One of the key areas of primary prevention is bystander intervention," Klein explained, "although it must be done the right way. Being an active bystander is not just about teaching someone tools to intervene when an assault is happening. Being an active bystander is about intervening long before anything can happen, giving folks the tools to have conversations about sexism, the role of masculinity, rape culture, challenging rape myths, and more."

According to Klein, catcallers are usually ignored. Because of that, they're not held accountable for their treatment of women and might eventually engage in worse behaviors.

"There is no product on the market that I have witnessed that focuses solely on the bystander experience, especially the way that it is presented with Decisions That Matter."

If nothing else, Klein hopes that players can empathize with the characters and situations shown in the game.

If the game manages to equip even a single person with the tools they need to step in as a bystander in these situations, it will be a huge success.

Decisions That Matter is an innovative tool in the fight against sexual violence that educates without being condescending and is something men and women of all ages should check out. It doesn't paint the perpetrators as cartoonish villains, and it shows that there's not always a right or wrong answer in these situations. It is an eye-opening experience.