'Bathroom bills' are harmful and absurd. This Texas woman's pic shows why.

A transgender Texas woman snapped a photo at a rally for Gov. Greg Abbott. The internet is loving it. 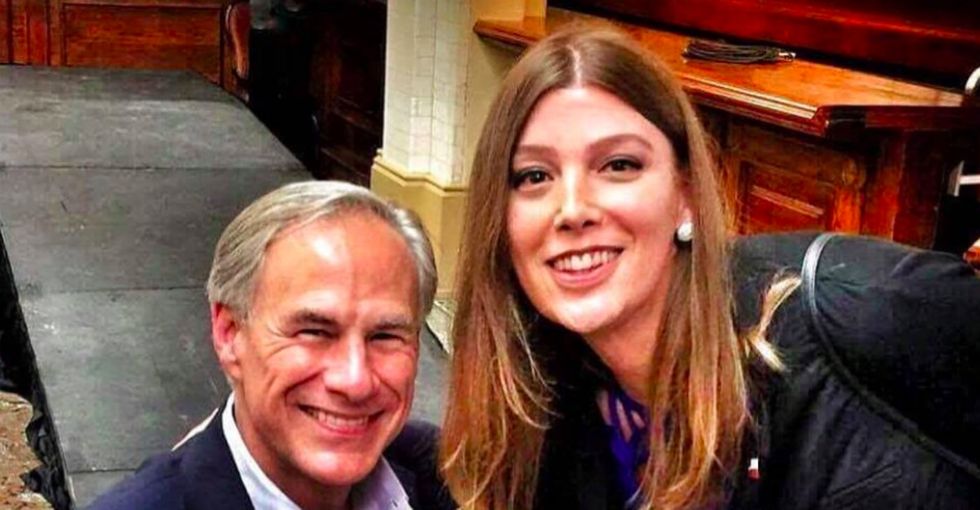 As many constituents do, Texan Ashley Smith recently snapped a picture with Gov. Greg Abbott at a re-election rally for the Republican leader in San Antonio on July 14.

At face value, the photo may not appear all that unique. But the message behind it (and hashtagged across it) truly is worth a thousand words.

Smith is transgender. And the photo comes at a critical time for trans rights in Texas.

Gov. Abbott supports Texas' Senate Bill 6 — legislation that would force transgender people to use the restroom that corresponds with the sex they were assigned at birth, regardless of their actual gender identity, in public facilities.

Without the support of house speaker and moderate Republican Joe Straus, the controversial bill stalled in the spring. But in June, the governor called a 30-day special session — which began this week — in part to further press lawmakers to resurrect the measure.

Texas' bathroom bill isn't just harmful, it's impossible to enforce, which is the point Smith wanted to make with her photo.

"How will the Potty Police know I'm transgender if the Governor doesn't?" Smith mocked in the caption of the viral photo, which has amassed 5,000 Likes and thousands of shares.

While everyone should have access to a bathroom that aligns with their gender — regardless if a person visually "passes" as that gender or not — Smith's photo highlights the absurd notion that that regulation could possibly be applied in a consistent way.

"We're about 1-in-300 people, we're all over the place, we're your friends and your neighbors," she explained to the San Antonio Express-News. "Some of us are not immediately obvious as trans. And the idea that you are going to be able to enforce a bathroom bill — I mean, the enforceability is just not there."

Even more important than the law's enforceability, research shows bills like the one in Texas are dangerously misguided.

Motivations behind these so-called "bathroom bills" cropping up in states across the country are born from the myth that sexual predators take advantage to prey on victims. That's simply not true.

Ironically, research shows people who are transgender are the ones living more at risk of violence and harassment. Laws that allow them to use facilities that correspond with their gender — as opposed to ones that restrict access to safe restrooms — help in reducing that risk.

In Texas, Smith believes, politicians should pay attention to reality.

"I think [Senate Bill 6] would be a disaster," Smith explained to CNN. "Transgender people have faced harassment just for being who they are."

Learn more about Texas' Senate Bill 6 and how to fight back at the Human Rights Campaign.

Upworthy reached out to Ashley Smith for comment. This article may be updated.