Another reason to love Australia? Doodlebug the orphaned kangaroo lives there. 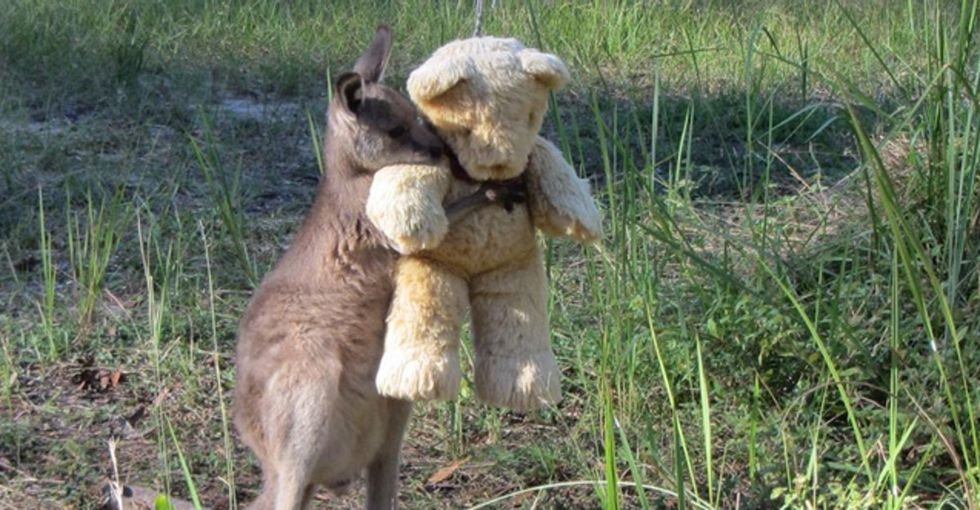 Take, for instance, these three things:

1. An adorable baby kangaroo exists. He lives in Australia, and he's an orphan.

2. His name is Doodlebug. Because of course it is. That's the best kangaroo name ever.

3. He was recently photographed hugging his favorite teddy bear. And to say that it's adorable is quite the understatement.

That almost too-cute-to-be-real image of Doodlebug hugging his furry inanimate friend was tweeted by Tim Beshara, a Tasmania-based media adviser, on Aug. 4, 2015. (And, yes, Tim tweeted "wallaby" but later clarified that Doodlebug is a kangaroo. The difference is tricky!)

The pic has taken the Internet by storm ever since, racking up 4,800 retweets.

Beshara's mom, Gillian Abbott — who spends her time caring for injured and orphaned creatures on her property in New South Wales, Australia — had sent him the image of the 15-month-old. Months ago, she spotted the little guy, weighing just about 3.5 pounds, on the side of the road.

"We don't know whether his mother had died either through a car accident or a dog attack," Beshara explained to CBS News. "Or whether he simply was abandoned."

But Doodblebug has found solace in his furry friend, which he cuddles and lays in the grass with, according to Beshara.

While spotting a kangaroo might seem exceedingly rare to those outside Australia, it's not quite as out of the ordinary to those living Down Under — according to the Australian Wildlife Society, the kangaroo population is estimated at a whopping 60 million across the island country — the highest it's ever been.

This particular "roo," as an Aussie might say, seems to have found a (somewhat permanent) home on Abbott's property for now.

"He is undergoing what is called a 'soft-release,' which means he is able to roam in the nearby forest but comes home for occasional extra feeding," Beshara told ABC News.

So, if you're ever in Australia and spot a kangaroo cuddling a teddy bear, know you're not hallucinating. It's just Doodlebug.

From Your Site Articles
Related Articles Around the Web
gaming

It's been 19 months since the first case of COVID-19 was identified in Wuhan, China, and since that time, a lot has changed. Cities, states, and entire countries endured rolling shutdowns — or lockdowns. Business shuttered and schools were closed, and life as we knew it changed. From mask mandates to social distancing, every action and behavior was altered. But as infection rates begin to drop, we are making a comeback. Restaurants, movie theaters, and malls are (now) open. Business is (more or less) back, and this fall, most children will return to the classroom. In-person education will resume. But what does life look like in a post-pandemic world, particularly for the youngest members of our society?

"The COVID-19 pandemic affected our kids in many ways that we don't yet fully understand," Laura Lofy — a licensed psychologist and school psychologist — tells Upworthy. "Some desperately missed their classmates. Others fell behind on schoolwork, and some became riddled with anxiety and fear. Many regressed on skills they had developed or lost momentum in areas in which they had been making progress." And one of those areas is interpersonal, i.e. many children are struggling socially, and this has the potential to have a long-lasting impact on our children and the next generation.

Keep Reading Show less
Get stories worth sharing delivered to your inbox
By signing up you agree to Upworthy's privacy policy.
Trending Stories
Education & Information