After Cannes turned away women wearing flats, actress Rashida Jones responded with her own rule.

It's 2015 and I cannes't believe that the Cannes Film Festival thought enforcing this shoe policy was a good idea. 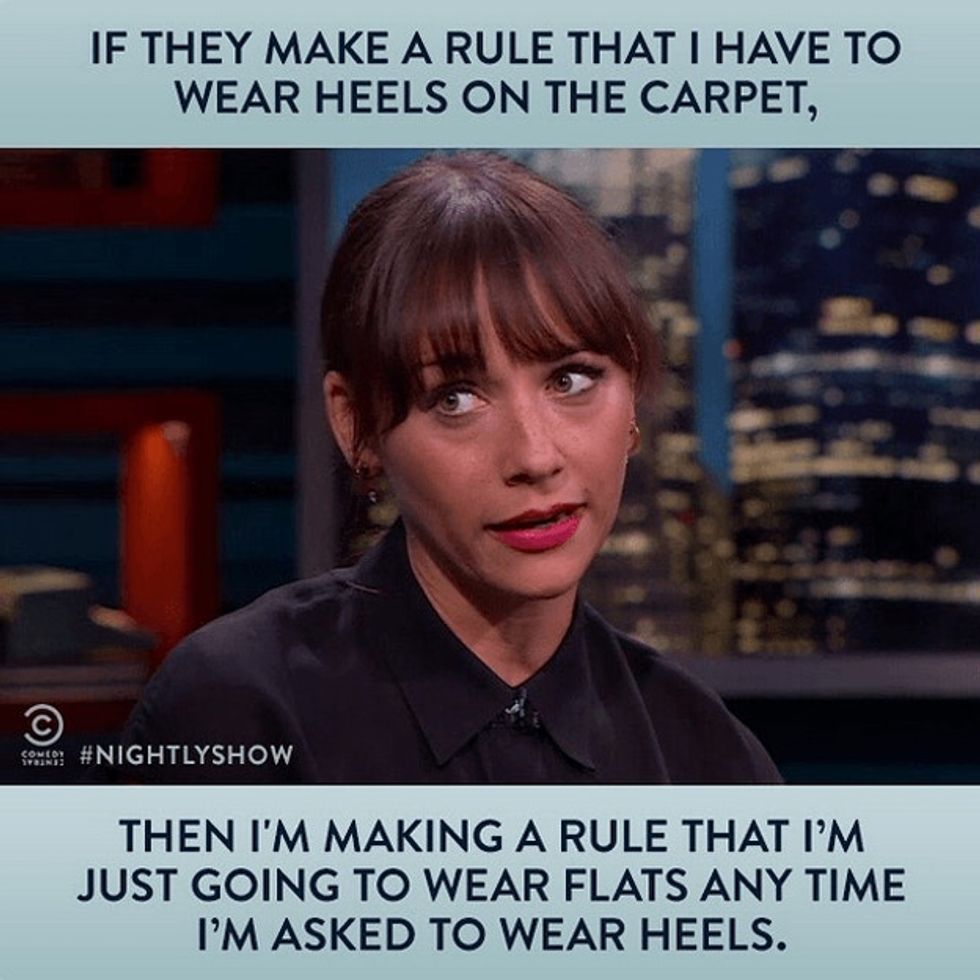 The Cannes Film Festival found itself in a bit of hot water last week when several women were refused entry to a film premiere.

They weren't turned away because they were drunk, or disorderly, or causing a scene.

It wasn't because they didn't have tickets or weren't supposed to be there in the first place.

In fact, one of the women turned away was the wife of director Asif Kapadia whose documentary about Amy Winehouse premiered at the festival.

No, it wasn't any of those reasons. These women were turned away because they weren't wearing ... heels?

As Andreas Wiseman reported over at ScreenDaily:

"In a bad PR move for the push for gender equality, a handful of women in their 50s were turned away from the screening of Todd Haynes' competition entry Carol [the film's feminist appeal further ironising the shut-out] on Sunday night after being told the height of their smart footwear didn't pass muster.

Multiple guests, some older with medical conditions, were denied access to the anticipated world-premiere screening for wearing rhinestone flats."

That medical condition, by the way? One of the women turned away was film producer Valeria Richter who has part of her left foot amputated. It is not actually possible for her to balance in heels.

So, before you ask how the hell was this even enforced, let's ask ourselves a larger question: How is it 2015 and we still have rules like this?

Did someone check to make sure actresses Cate Blanchett and Rooney Mara (pictured below at the same premiere where the other women were turned away) weren't secretly hiding a pair of rhinestone flats beneath their fashionable gowns? For all we know they both wore wooden clogs or fluffy slippers and no one was the wiser (the horror!).

Who knows what kind of footwear is hiding under those gowns? More importantly, why should it matter? Photo by Pascal Le Segretain/Getty Images.

On Twitter, Melissa Cole started the hashtag #showmeyourflats as a way of responding to the controversy.

And, of course, after facing much criticism from celebrities like Bette Midler...

...and actress Emily Blunt, who was backed up by British national treasure Stephen Fry...

Cannes clarified its policy saying that heel height was never part of its dress code rules to begin with ... but also that the festival's hosts were reminded to enforce it.

It was very confusing. Read for yourself:

"Regarding the dress code for the red carpet screenings, rules have not changed throughout the years (Tuxedo, formal dress for Gala screenings) and there is no specific mention about the height of the women's heels as well as for men's. Thus, in order to make sure that this rule is respected, the festival's hosts and hostesses were reminded of it."

Thierry Fremaux, the festival's director, was much clearer when he apologized and conceded the policy was wrong saying, "there was perhaps a small moment of over-zealousness [in the enforcement of the black tie dress code]."

Not everyone is so quick to forgive and forget though.

In a recent appearance on "The Nightly Show," actress Rashida Jones dropped the mic on Cannes with a rule of her own.

@rashidajones on women wearing flats being turned away from the Cannes red carpet. #NightlyShow
A photo posted by The Nightly Show (@thenightlyshow) on May 27, 2015 at 2:41pm PDT

I'd like to sarcastically thank Cannes for the fantastic reminder that sexism can bubble up in the weirdest ways.

And I'd like to sincerely thank Rashida Jones for taking a "Cannes"-do attitude to a "Cannes"-don't dress code and giving people everywhere the best line ever for responding to ridiculous dress codes.