After a puppy died, this Republican senator took action. He should apply that to kids.

Washington can solve problems — when it wants to. 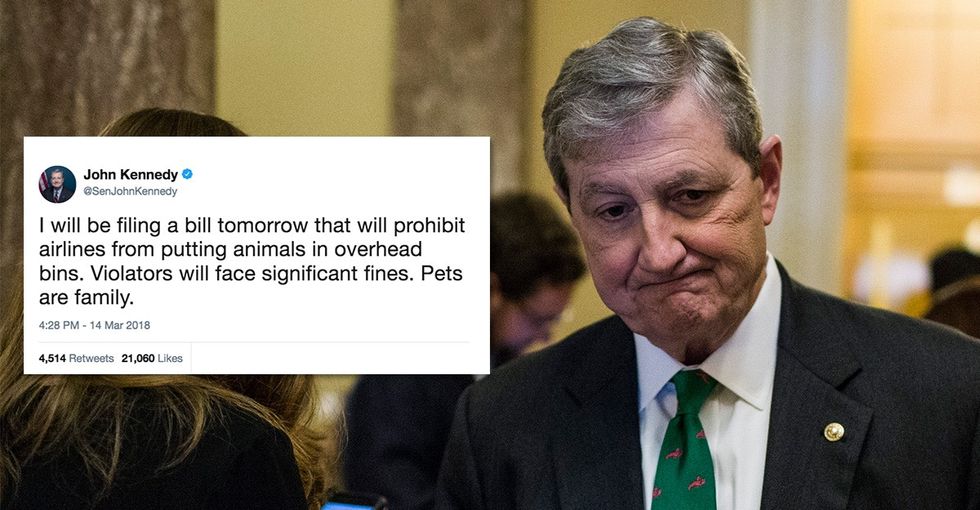 On Monday, March 12, a 10-month-old French bulldog puppy named Kokito died aboard a United flight from Houston to New York after his owner was ordered to put him in the overhead bin for the trip's duration. It was a horrible and heartbreaking story, and Kennedy decided that something needed to be done. Within two days, the junior senator from Louisiana announced plans to introduce a bill banning airlines from placing animals in overhead bins.

"Violators will face significant fines," he tweeted. "Pets are family."

I will be filing a bill tomorrow that will prohibit airlines from putting animals in overhead bins. Violators will… https://t.co/K5nUCYEGvx
— John Kennedy (@John Kennedy)1521062938.0

You'd be hard-pressed to find an animal lover who'd disagree with Kennedy's approach. It absolutely should be illegal to put animals in overhead bins, and more should be done about the spate of animal deaths aboard commercial flights. United seems to be a particularly egregious offender. Just two days after Kokito's death, another United flight accidentally sent a Kansas-bound dog to Japan. It's unacceptable because, like Kennedy said, pets are family.

Being able to quickly identify and address serious issues is government at its best, which is why it's unfortunate that Kennedy doesn't apply the same approach to other situations.

"In a lot of respects, dogs are how people ought to be," wrote Kennedy in another tweet. "What happened on [United] was disgraceful and doesn’t need to happen again. I don’t enjoy having to legislate common decency, but by God, I’m going to do it until they take this seriously."

Looking to another recent tragedy, however, Kennedy's philosophy couldn't be more different. After the Parkland shooting, Kennedy responded to calls for action designed to make it harder for potential shooters to access deadly weapons by dismissing the idea of any legislative steps: "I don't think we need more gun control laws. I think we need more idiot control."

The argument, from Kennedy and others opposed to taking action on guns in the wake of a shooting, is essentially that anyone who wants to shoot up a school is going to find a way to do it, so we shouldn't bother putting additional legal obstacles in their way. One could say the same about anyone who'd knowingly put a puppy in an overhead bin, yet Kennedy feels like that's something worth immediate action.

Hopefully Kennedy can take a lesson from himself on this issue. Like pets, our children are family and deserve protection.

Good luck to Kennedy on getting his bill passed in hopes of stopping future pet-related tragedies in the sky; it's still not too late for him to help stop the ones happening in our schools.