A super-rare illness might take her sight, so she's seeing the world while she still can.

There’s a very real possibility that 15-year-old Alexis Meyers will become completely blind in the next few years. Before that happens, she and her family are trying their hardest to make sure she sees as much of the world as she can. 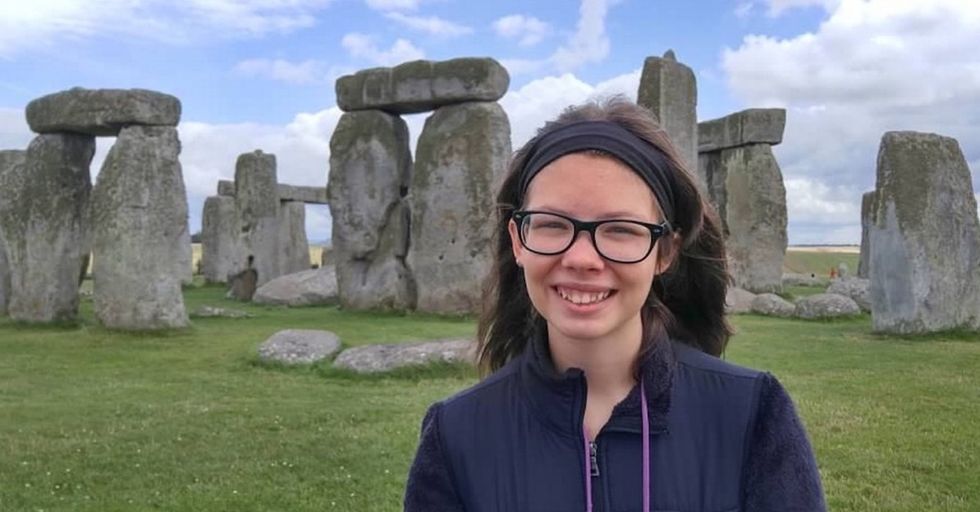 Even when she was little, Alexis knew something wasn’t quite right with her eyes.

She remembers it starting in third grade. "It was harder to read books, and I couldn't see the blackboard," she says. Her hearing loss that had started in kindergarten was worse too.

Alexis and her family at Disneyland Paris. Image via the Meyers family, used with permission.

After years of tests, the Meyers family and their doctors discovered the cause — a mutation of Alexis' OPA-1 gene. It's an extremely rare disorder that causes the cells in Alexis' optic nerves to atrophy, eventually causing blindness. At present, there's no cure.

Once she knew what she was facing, Alexis didn't shrink from it.

In seventh grade she stood in front of her class and gave a PowerPoint presentation about her genetic disorder. She explained what causes it and what it was doing to her eyesight and hearing. She shared that it could leave her blind before her 20th birthday. She was brave, factual, and didn't cry. After all, she already had a plan.

Alexis at Stonehenge. Image via the Meyers family, used with permission.

Alexis had always wanted to see the world someday. Her diagnosis simply moved up the schedule.

For the last few years, Alexis and her family have traveled as much as they can. They've visited the Grand Canyon, Mackinac Island, England, France, and Germany. Alexis loved Germany's castles — Heidelberg in particular. "There was so much history, so much celebration and so much food in Germany," she says. "Heidelberg was so big and beautiful— and it has the world's largest barrel inside it!" After a pause she adds conspiratorially, "It's supposed to be haunted too."

One of her favorite early trips was to Jamaica, where the family swam with dolphins and climbed waterfalls. Alexis loved every minute, but cautions folks against taking a horseback ride on the beach. "The horses in front of you will throw up sand with their feet and it gets in your face. It's really gross."

Most of Alexis' travel money comes through fundraisers. She's sold homemade jewelry or handcrafted dog treats to help pay for trips. Right now, she and her family are raising money with an online fundraising page.

Alexis' list of places to go and things to do is still growing.

Number one is to see Iceland's northern lights. Sometime in the next year, she'll do just that.

The Northern Lights tops Alexis' list of natural phenomenon she wants to see. Image via iStock.

The family is planning a trip to Iceland where they'll take a dip in the blue lagoon and watch auroras make the sky dance and change colors. Later they're hoping to visit Northern Ireland and walk the Giant's Causeway, travel to Rome to see the Colosseum, visit Australia and New Zealand, and then check out Kīlauea volcano in Hawaii.

Receiving the kind of diagnosis that Alexis did could be devastating and isolating for so many people. Thanks to her family and community, Alexis is determined to see the positives.

With their help, she's transforming it into an opportunity to create visual memories of the world she loves before she can’t anymore.

Eventually, Alexis wants to go to college and study to become a veterinarian. Second only to travel, she says, is her love of animals. But the cats and dogs can wait — for now, seeing the world is her first priority.