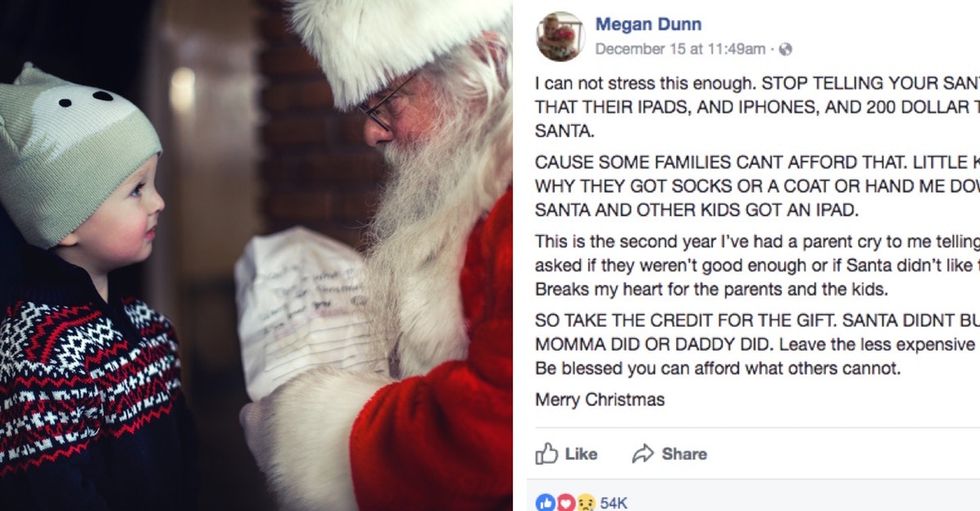 The holiday season — and Christmas in particular — isn't just for kids, after all. A lot of us parents get pretty excited about getting a chance to make our kids' eyes light up when they open their gifts under the tree. It's one of only a small handful of times a year where we're not just allowed, but encouraged to splurge, spoil, and spend whatever we can on them.

If you have the means to do that, that's great! Good for you.

But Megan Dunn, a social worker from Owensboro, Kentucky, says there's a really powerful reason parents may want to consider making sure their kids know that their gifts — particularly expensive gifts — came from them, and not Old Saint Nick.

And no, parents, it's not so you can take that glory for yourself.

So why does Dunn suggest parents let Santa take credit only for the less expensive gifts?

"I can not stress this enough. STOP TELLING YOUR SANTA AGE KIDS THAT THEIR IPADS, AND IPHONES, AND 200 DOLLAR TOYS ARE FROM SANTA," she wrote in an impassioned, caps-laden Facebook post.

"CAUSE SOME FAMILIES CANT AFFORD THAT. LITTLE KIDS WONDER WHY THEY GOT SOCKS OR A COAT OR HAND ME DOWN TOYS FROM SANTA AND OTHER KIDS GOT AN IPAD."

The emotional toll that this kind of comparison game can take on kids and their parents is devastating, Dunn explains. It's not just that kids get jealous that Santa brought their friends fancier or more expensive toys — it actually makes them feel like they did something wrong and that maybe Santa doesn't like them.

The effect can be crushing.

The full post, which you can read below, quickly went viral, and now has been shared nearly 100,000 times.

I can not stress this enough. STOP TELLING YOUR SANTA AGE KIDS THAT THEIR IPADS, AND IPHONES, AND 200 DOLLAR TOYS ARE...

"Children view Santa as this person they can ask for whatever they want so long as they have been good," Dunn explains in a Facebook message.

"They wait all year to ask Santa for that one gift because even if they realize they are poor, they truly believe Santa has no limitations or socioeconomic status. When they wake up on Christmas and see they have not been given that gift they are heartbroken."

Thousands of comments of support have poured in in response to Dunn's message. But more than a few folks have expressed frustration at being asked to make compromises on the way they do Christmas or talk about the magic of Santa with their kids.

"I am not ruining the magic of Christmas and Santa for my kids because others can’t afford it," one angry parent wrote.

Still, the discussion has inspired something truly wonderful: Since Dunn's post went viral, donations have been pouring in for her to pass on to the families in need that she works with. She's received close to $10,000 in donations so far.

It's important to note that Dunn isn't saying you shouldn't buy your kids whatever gifts you want or can afford. She's just asking to consider a simple tag swap on some of the pricier items.

"People can and should buy their children whatever they chose and I would never say otherwise," she says. "I simply asked that the expensive gifts say 'from parents' and not from the 'almighty Santa.'"

So the Xbox One X or the iPad or the new laptop is from the folks, and Santa can take all the credit he wants for those wool socks. Easy, right?

It's one of those tiny gestures that doesn't take much, but could make a big impact on another family this holiday season.