A huge win for the people protesting at Standing Rock — and for all of us.

The federal government stepped in to put plans for a pipeline on hold. 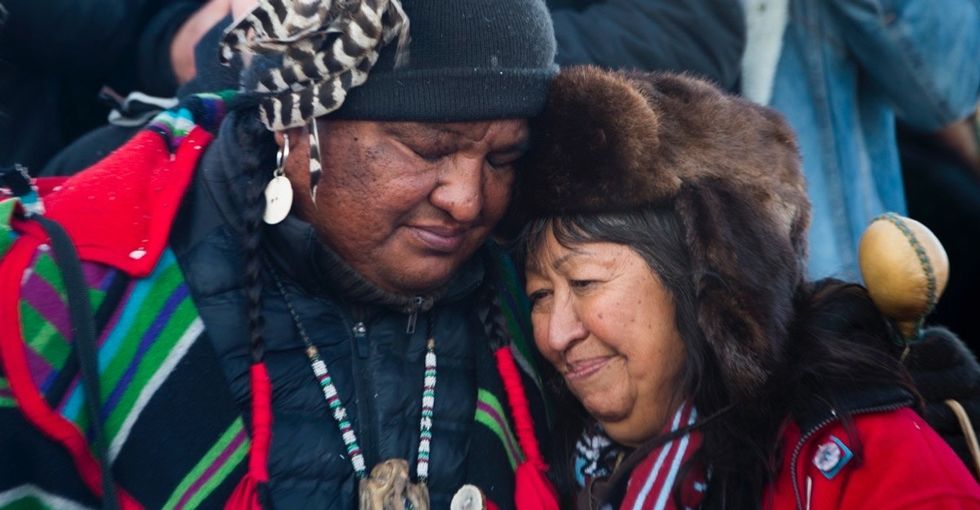 After a months-long standoff, Native Americans at the Standing Rock Sioux reservation in North Dakota got some great and unexpected news from the federal government.

On Sunday afternoon, the Army Corps of Engineers put plans for the Dakota Access Pipeline on hold while it explores alternate routes for the $3.7 billion project.

Interior Secretary Sally Jewell said in a statement that the decision "underscores that tribal rights reserved in treaties and federal law, as well as Nation-to-Nation consultation with tribal leaders, are essential components of the analysis to be undertaken in the environmental impact statement going forward."

It's a win for the water protectors of the Standing Rock Sioux tribe, for indigenous rights as a whole, and for anyone who believes in the power of peaceful protest and organization — but there's still a long way to go.

The Standing Rock Sioux tribe reflected on the victory, thanking tribal youth, the thousands of individuals who came to show support in person, the tens of thousands who helped from afar through donations, and other tribal nations that joined them in solidarity. Still, they understand the next few months will be crucial to the long-term safety of the land.

"We hope that [Energy Transfer Partners CEO Kelcy] Warren, Governor Dalrymple, and the incoming Trump administration respect this decision and understand the complex process that led us to this point," the statement read. "When it comes to infrastructure development in Indian Country and with respect to treaty lands, we must strive to work together to reach decisions that reflect the multifaceted considerations of tribes."

So, what happens now? According to a report by the Institute for Energy Economics and Financial Analysis, the pipeline's financial backer faces a rapidly approaching deadline that it's now sure to miss.

If Energy Transfer Partners misses the Jan. 1, 2017, deadline to finish the project, companies committed to ship oil through the pipeline at 2014 prices have the option of rescinding their support for the pipeline.

What does this mean? In short, even if the Trump administration reverses course on Sunday's decision, many of the companies keeping the project afloat financially can deliver their own blow to the pipeline's prospects. Should the administration go forward with the pipeline, putting pressure on some of the companies involved to pull out of the agreement might be the next step in pipeline activism.

Fighting for what's right is a group effort, and the victory at Standing Rock truly shows that it's up to all of us to press for change.

With the help of religious leaders, Native American tribes and activists, celebrities, and many others, the Standing Rock Sioux tribe claimed a huge victory in both the fight for its land and the fight for justice.

Though not over by any means, what unfolded at Standing Rock can serve as a lesson for those who feel helpless in our current political climate: If we join together, we can overcome seemingly insurmountable challenges.

For now, and hopefully for good, DAPL is leaving Standing Rock.