A homeless man says he got 100s of job offers when his story went viral. That's a problem. 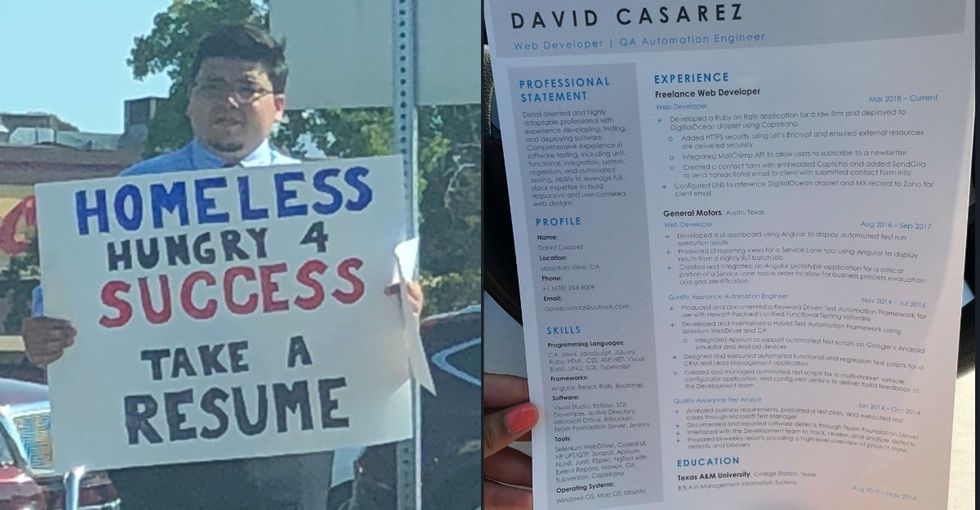 On July 27, a tweet about a homeless man looking for work went viral.

David Casarez, a web developer and Texas A&M graduate, was looking for work in the Bay Area, where he'd moved to achieve his dream of working in Silicon Valley. Eventually, Casarez had to move into his car because he couldn't afford housing — then it was repossessed. Now he sleeps on park benches.

He took to a crosswalk with a sign and hundreds of copies of his resume. Someone passing by took one and posted it to Twitter.

The tweet was shared over 100,000 times. Casarez told The New York Post that he's since had hundreds of job offers from companies like Google and Pandora. And while he was celebrated far and wide for his grit, the reality of Casarez's situation is far from a fairytale: "tonight, I'll be back on my bench in Rengstorff Park," he said.

On the surface, this story is one of triumph, but it exposes a huge problem in America.

When we read stories like this, we want to feel good about the fact that people help other people (they do!) and that those who are struggling get the support they need (that sometimes happens too!). But there's a problem with that — and it's the fact that support like this isn't built into our communities. And that trend is troubling, especially when so many people need help.

It’s really strange and kind of horrifying that poverty and systemic failures by way of a homeless man handing out… https://t.co/Fwf8AUQSV9
— roxane gay (@roxane gay)1532809847.0

Homelessness is a huge problem. And it won't be solved by virality.

According to the latest statistics, more than half a million people are homeless in the U.S. on any given night. And prevalent myths about homelessness — that it's caused by laziness and not systemic issues, that homeless people just aren't trying hard enough to succeed, or that a job guarantees that one will have a place to live, to name a few — don't help the situation at all.

The bootstraps narrative is a myth, and you shouldn’t need a fucking human interest story to feel compassion toward… https://t.co/XdlBq5xCX2
— Sam H. Escobar (@Sam H. Escobar)1532808105.0

In order to end homelessness, we must support and call for programs that both create housing and make people feel like they're part of the community. We must take a closer look at programs that offer citizens a universal basic income, comprehensive and accessible health care, and other social safety nets. We must check our own biases about homelessness.

And we must vote to usher in policies that make it easier for all people to have safe and affordable housing — so that in the future no one has to go viral in order to just survive.