A before-and-after snapshot shows the incredible impact of clean cookstoves. 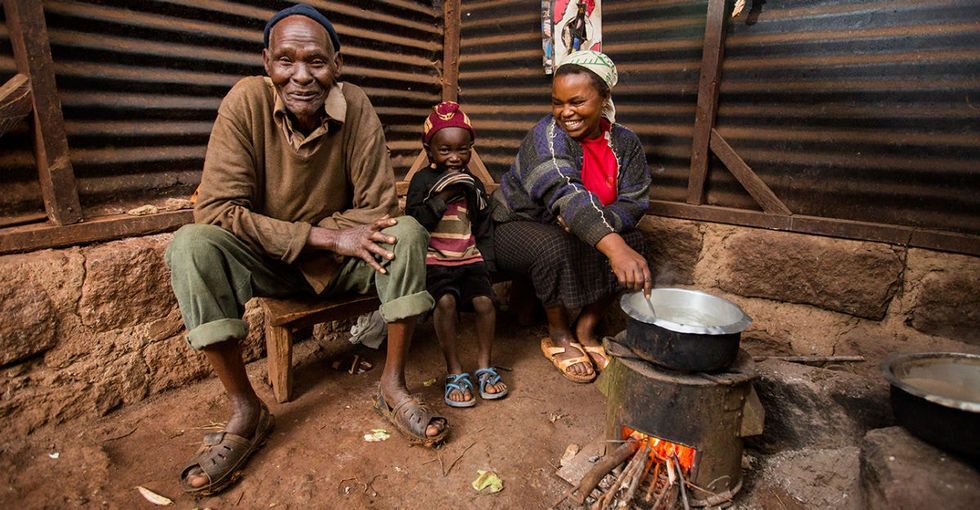 Cooking dinner usually results in, well, dinner.  But for too many people, it can have a devastating side effect.

For the 3 billion people in developing countries who cook their meals over an open fire, dinner preparation can be a silent killer (and I don't mean from boring table talk).

In fact, it's one of the biggest — and least known — killers of women and kids around the world.

Over 4 million people die every year from inhaling the toxic pollution from unsafe stoves.

Having to cook over an open fire — burning dung, coal, and wood for fuel — is comparable to smoking two packs of cigarettes a day. Not to mention how dangerous it is to live around an open flame every day. Clumsy or not, that's a recipe for burns — or worse.

Luckily, some innovative folks created a cookstove that's pretty incredible. It's saving the lives of moms and kids — and creating jobs.

These charcoal-efficient cookstoves, currently making the rounds in Kenya, are drastically reducing smoke from cooking fires and cutting in half the amount of charcoal needed.

They come from the folks at The Adventure Project, and the impact they've made so far is quite mind-blowing. You don't have to just take my word for it, you can see it for yourself:

The benefits of using charcoal-efficient stoves extend way beyond the food they help to prepare.

According to the group, every stove saves a family 20% of their daily expenses because they use 50% less charcoal per day. And it helps save them time too. In Kenya, the average woman can spend up to 30 hours a week just collecting firewood. But that's not necessary with a clean cookstove.

When Mary bought a stove, it meant her kids could finally go to school.

She no longer has to spend so much money on firewood, and now she's able to send her kids to get an education.

"I am using more money for school fees and buying house goods like food," she told The Adventure Project. "Although the school fees are quite an amount, I can pay them and save money. Every month I spent 1000 on firewood but now I only spend 400 shillings so I can save 600 shillings."

In less than two years, 17,876 charcoal-efficient stoves have been sold in Kenya.

According to The Adventure Project, these stoves have helped more than 89,000 people and saved over 107,000 trees from being cut down.

In other words, they're working.

And perhaps the best part is that The Adventure Project doesn't just give the stoves away. Their model is meant to last.

The organization invests in training people in Kenya, like this stove entrepreneur named Josephat, to make the stoves and sell them at an affordable price to their neighbors. And they make sure everyone is able to afford a stove, even the extremely poor, through low-interest loans. It creates sustainable local business.

Safe and reliable access to energy for cooking is a basic need.

And when you move past the top-line data points and measurements of a cookstove's immediate impact, you can't forget the human element it brings: Progress like this can help families bond and grow closer. Mary can attest to that.

"If they inhaled the smoke they would have very bad coughing and I feared for their health," she recalled. "Now, with the coal stove I can cook comfortably in the kitchen, my husband can finally sit in the kitchen with me and talk to me."

Our global food system is transforming for good — and we're only just beginning. The Adventure Project is just one group out there focused on clean cookstoves and taking small sustainable steps toward a better world.

Helping kids grow healthier, local economies succeed, and families lift themselves out of poverty ... all because of a stove? It's very much happening.