A baseball team showed a gay couple on the 'kiss cam.' Here's how the crowd reacted.

This is long overdue. 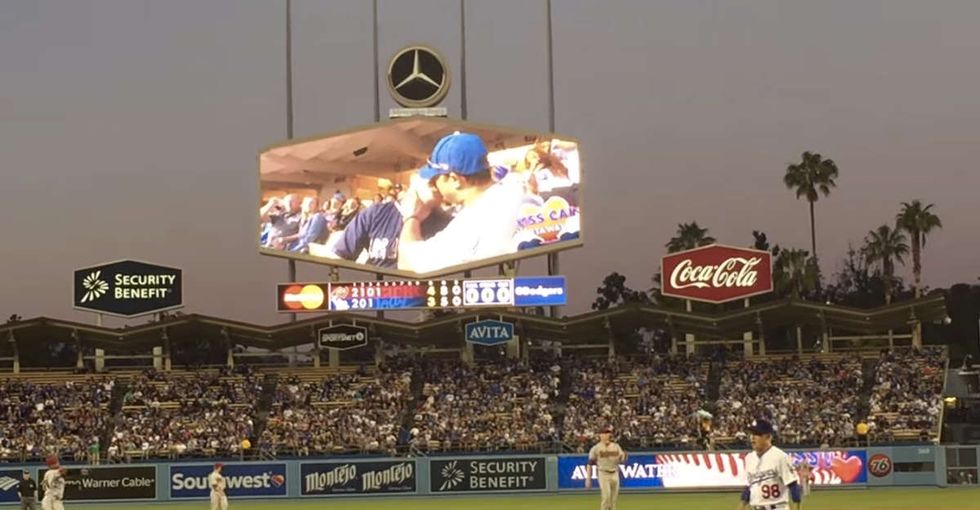 It warmed my heart to see a gay couple gets the loudest, longest applause on the Dodgers Stadium "kiss cam."

They're the fifth couple in — skip to around 0:25 if you're not super into strangers making out at sporting events.

The Dodgers haven't always been super friendly to LGBT couples.

Just 15 years ago, they removed a woman and her girlfriend from a game for kissing in the stands, according to one member of the couple.

"To tell the story of the Kiss Cam, let's start with a kiss that happened off camera. On Aug. 8, 2000, Danielle Goldey and Meredith Kott attended a game at Dodger Stadium. At one point, as couples are wont to do, they smooched. Before long, security guards arrived, removed the women from their seats, and escorted them out of the ballpark. 'It was shocking,' Goldey told me not long ago. 'I'm a diehard, true blue Dodger fan and this is happening. Are you kidding me?'" — Alan Siegel, Deadspin

Slowly but surely, they've come around.

In 2011, the team contributed a video to the "It Gets Better" campaign, which aims to give hope to LGBT youth. And in 2013, they hosted their first LGBT Night.

But the "kiss cam" is a holy sports ritual, right up there with overpriced beer and the wave. And only a few professional teams have featured an LGBT couple to date. It's a big deal.

So cheers to these mystery gentlemen!

I'm normally not super into PDA, but yours makes me feel feelings, so you get a pass. The Los Angeles Dodgers love your love. And so do I.

And hey, no offense to any of the other couples featured.

You guys are super great. Keep on kissing.