A balloon took her Christmas wish list from Mexico. A real-life Santa found it in the U.S. 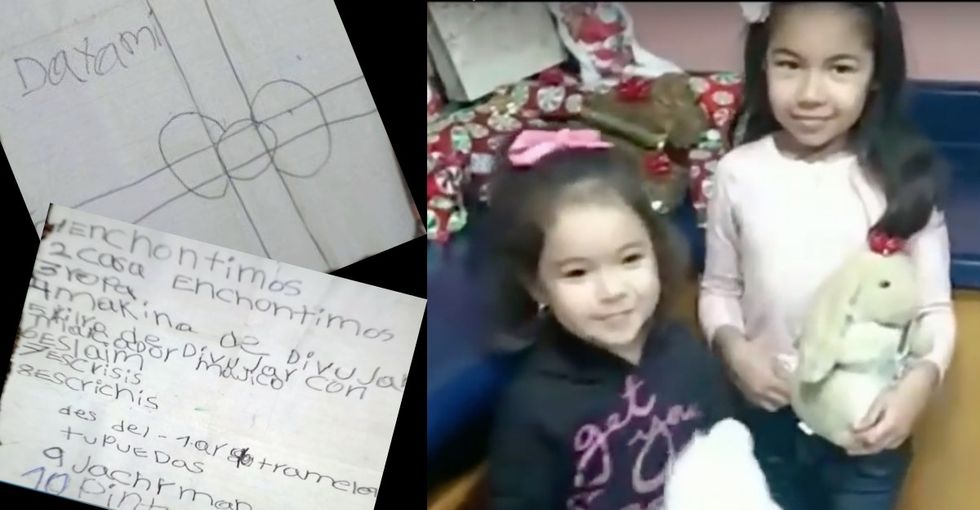 When 8-year-old Dayami wrote her Christmas wish list and sent it off on a red balloon, she had no idea a real-life Santa would find it.

Randy Heiss was walking his dog in the mountains of Patagonia, Arizona when he came across a deflated red balloon with a note attached to it. On the front was a hand-drawn ribbon with the name “Dayami” scrawled in a child’s handwriting. Inside, written in Spanish, was a numbered list of items including paints, slime, a doll and dollhouse, and clothes—a child’s Christmas wish list to Santa.

Most would think such a note was cute and then toss it in the trash. But after Heiss’s wife translated the note, the couple decided that it would be a shame for Dayami’s Christmas wishes go unfulfilled.

“It really touched my heart to find it,” Heiss told NBC affiliate KVOA, “and I said well how in the heck am I going to be able to figure out how to make contact with this little girl and make her wishes come true.”

Heiss shared the note on Facebook to see if anyone might know where the balloon came from. After a few days of no leads, he enlisted the help of Radio XENY AM in Nogales, Mexico, which shared a photo of Dayami’s note on the station’s Facebook page.

Within an hour, someone tagged Dayami's mother in the post and the girl was found. As it turned out, she lives in Nogales, Mexico, less than an hour's drive from Patagonia.

Once the Heisses knew who and where Dayami was, they set out to make her wishes come true.

Dayami may have sent her wish list off to Santa by way of balloon, but the winds of fate had blown it right into Randy Heiss’s path. And he and his wife were deterimined to make sure Dayami got the gifts she asked Santa for.

The Nogales radio station helped arrange a meeting between Dayami’s family and the Heisses, and the couple crossed the border to hand delivered the gifts to Dayami and her younger sister, Ximena.

Heiss made mention of the wall the Trump administration wants to build along that border. “A 20-foot tall wall along the border. We got concertina wire stretched throughout it now,” he said. “Nothing is going to stop the faith of a child and her Christmas wishes.”

He told the "Today" show, “Love has no borders. That wall melted away for the day.”

Taking on the role of  Santa for Dayami and her sister helped bring healing to the Heisses, who lost their only child years ago.

For Randy Heiss, shopping for Christmas gifts for Dayami was more than just a kind-hearted gesture. It helped fill a void that the couple always feels this time of year.

“We lost our only son nine years ago,” Heiss told KVOA. “So we don’t have grandchildren in our future and so really getting to share Christmas with kids was something that’s been missing in our lives.”