A 67-year-old man solicited a 13-year-old girl for sex. The judge called her 'an aggressor.' 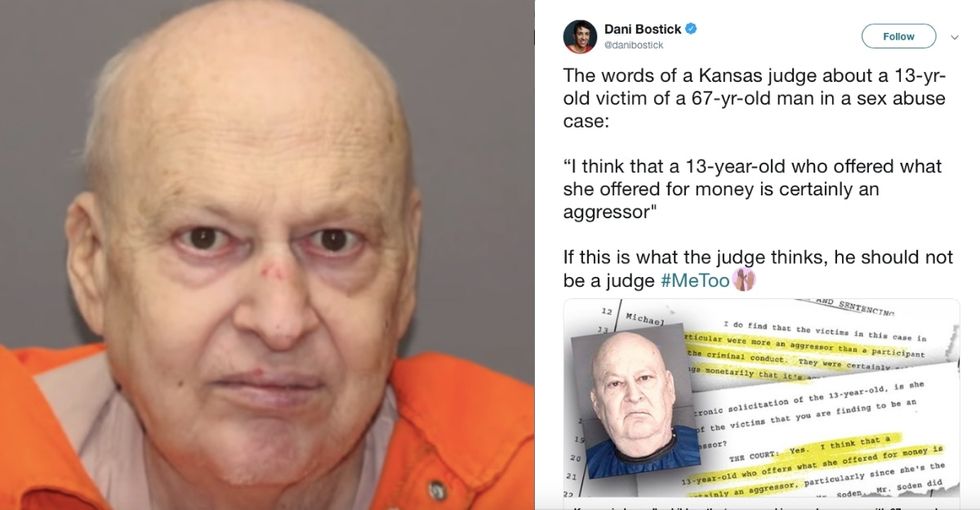 A 67-year-old man solicited a 13 and 14-year-old to sexually abuse them. Then the judge called the girls "an aggressor."

But apparently we don't live in a normal world. At least not in the Kansas courtroom where a judge decided that 13- and 14-year-old girls are "aggressors" in the above scenario. That's right. Aggressors.

Raymond Soden pleaded no contest to soliciting a 13-year-old for nude photos and sexual acts through Facebook. He admitted to knowing her age at the time. No contest. He did it.

But Leavenworth County District Judge Michael Gibbens decided that Soden couldn't totally be blamed for being a disgusting perv.

“I do find that the victims in this case, in particular, were more an aggressor than a participant in the criminal conduct,” Gibbens said before Soden's sentencing. “They were certainly selling things monetarily that it’s against the law for even an adult to sell.”

“I think that a 13-year-old who offered what she offered for money is certainly an aggressor," the judge said, per the Kansas City Star, "particularly since she’s the one that had to travel to Mr. Soden.”

I see. So Soden didn't go to the girl's house and force her to perform sexual acts; she traveled to him and he paid her money. Surely that means the 13-year-old minor was basically forcing this 67-year-old man into being a pervy sexual criminal. Got it.

The perpetrator's sentence was reduced to less than half of the state's sentencing guidelines.

Judge Gibbens sentenced Soden to five years and 10 months, almost eight years less than the 13-plus years prosecutors were seeking based on Soden's criminal history. The Star reported that Soden had two prior criminal convictions for battery and sexual battery.

According to Kansas law, a judge has to have “substantial and compelling reasons” to depart from sentencing guidelines. In this case, the judge cited evidence that the young teens had voluntarily gone to Soden's house and taken money for what they did.

The mental gymnastics this judge had to go through to try to justify a 67-year-old's criminal child sex abuse must have pulled a muscle in his brain. That's the only explanation.

The judge is facing harsh criticism for his comments, because there's no other reasonable reaction to have in this case.

The fact that a judge seems oblivious to consent laws in his own state is baffling enough. The age of consent for sex in Kansas is 16, which means that any adult sexual contact with someone under age 16 is sexual abuse or rape.

But beyond the law, isn't this just common sense?

How can a 13-year-old child possibly be considered an "aggressor" when a 67-year-old solicits her for sex?. I don't care if she showed up at his door stark raving naked. I don't care if she suggested it. She is a child. He is an adult. He is the aggressor if any sexual acts take place. Full stop. End of story.

But the judge appears to be convinced that these girls deserve some blame. According to the Star, the judge questioned one girl's statement that she was "uncomfortable" with the sexual contact and doubted that the experience was traumatic for her.

“And so she’s uncomfortable for something she voluntarily went to, voluntarily took her top off of, and was paid for?” Judge Gibbens asked the prosecutor.

“Yes, judge," the prosecutor responded. "She was also a 13-year-old who under our laws can’t consent to anything.”

Judge Gibbens said he understood that, but then added, “I wonder what kind of trauma there really was to this victim under those peculiar circumstances.”

Good gracious. She's a child. He's an adult. She cannot consent. You cannot judge her trauma, Judge Gibbens. You should know better, and the fact that you don't puts a damning stain on our justice system.

Actress Julia Fox shares a tour of her cluttered NYC apartment, and it's a relatable mess

"Hopefully, somebody watches this and thinks, ‘Well, OK, maybe I’m not doing so bad.’”

Julia Fox taking viewers on a tour of her apartment in New York.

To live in a perfectly curated, always tidy, Marie Kondo-worthy home might be a lovely fantasy. But for many, dare I say most of us, that is simply not a reality. There just aren’t enough hours in the day or helpful hands in the house to keep it from getting messy multiple times a week. Square that by a million if the home has small kiddos in it. And if there’s only one parent to clean up after those small kiddos? Forget about it.

That’s why people are letting out a huge sigh of relief after getting a video tour of Julia Fox’s New York apartment in all its glorious disarray.

The actress and model is often seen wearing bold, high-end fashion pieces at glamorous events like the Met Gala,

but her home is anything but glamorous.