A 15-year-old girl might have made HIV tests as easy as pregnancy tests.

Nicole Ticea's HIV test invention is a long way from widespread use, but it's a start. I love it when stories like this from the Tumblr YearofWomen pop into my Internet world. 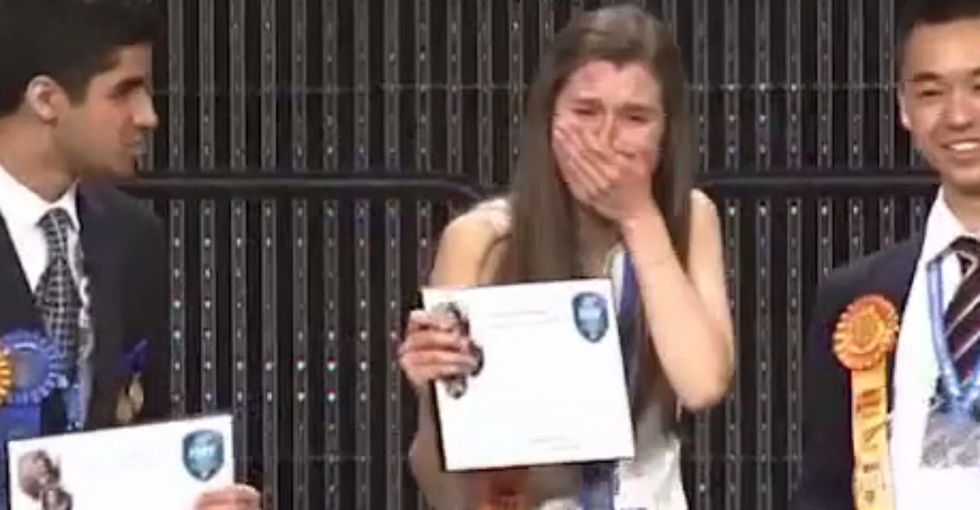 While you were probably wondering if you'd pass the driver's test at 15 years old, Nicole Ticea was working to revolutionize HIV testing.

How? By trying to make HIV tests as easy as pregnancy tests.

Consider her brilliant work a celebration of a young scientist taking one small step for humans, and one potentially giant step (after more stringent peer review!) for humankind.

Here's the background: HIV testing is necessary, but it can be embarrassing, it's hard, and it takes a while for results ... and in some places, it's expensive. According to the Centers for Disease Control and Prevention, of all Americans age 13 and older who are living with HIV (1,201,100), an estimated 160,300, or 13%, don't even know they have HIV.

And over 50% of young people with HIV don't know they have it. So in some ways, HIV is a youth issue.

That statistic stinks. But here's what doesn't: a teen with a solution. Turns out the kinda best person to attack these horrid youth stats is ... a YOUTH PERSON!

That's where 15-year-old Nicole Ticea and that kind-of-like-a-pregnancy-test come in. Her idea could make it a whole heck of a lot easier simply to get tested and diagnosed.

See, HIV testing usually requires expensive lab equipment and time to process the test. But Nicole used a new method called isothermal nucleic acid amplification, which means that tests can be done anywhere — potentially, even in remote locations around the world — and quickly. Then she found a way to test for the HIV virus itself rather than for humans' reaction to it, which means the virus can be detected much sooner — as early as one week after infection.

Bam! Faster testing. Take the test and you could have results in under an hour.

Oh and did I mention you wouldn't even need electricity? The device would be disposable, and it should cost less than $5 to produce. Double bam!

This is a new technology that hasn't been peer reviewed yet, so these magical HIV-tests-that-are-as-easy-as-pregnancy-tests aren't coming to a store near you right away (Nicole just invented it!). There's a lot more that has to be done before this brilliant idea can become a reality or to know if it really will work exactly like Nicole hopes it will. But this is one HUGE step toward a healthier world.

The earlier you catch HIV infection, the greater your chances of survival are. Plus, the risk of passing on the disease diminishes HUGELY.

Inventing a high-speed HIV diagnosis ... sounds like the work for a teenage girl, right?

It should. Because it is.

The world is beautiful when we give teens the keys ... TO SCIENCE!

You go, Nicole. It's only been a year since you've come up with it, but I see big things for the future of your invention. We'll be Googling you from here on out to see what's happening with the test's development!