7 experts who are taking over tech and challenging racism and sexism in the field. 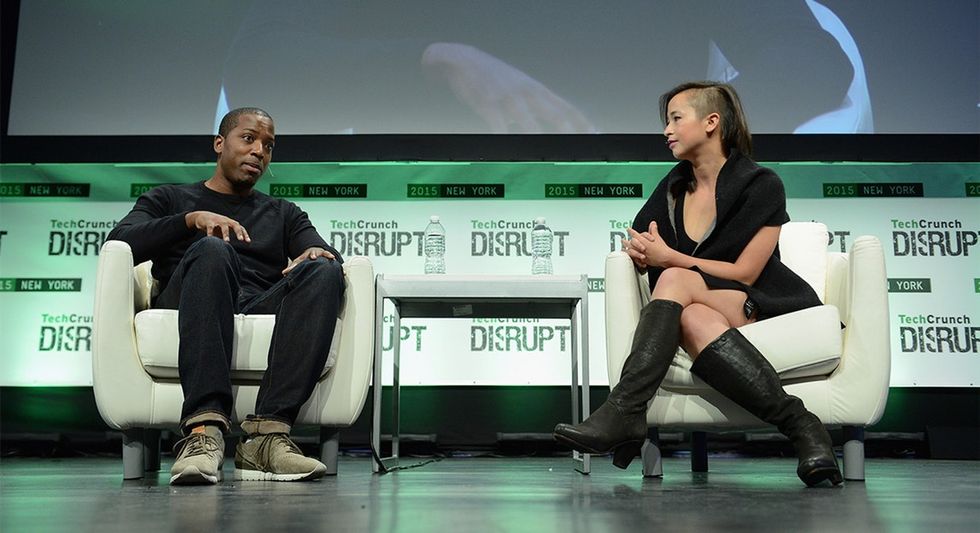 When James Damore sent his inaccurate and problematic memo on diversity in the workplace, the internet, tech experts, and the general world responded with justified frustration.

The former Google software engineer wrote a 10-page anti-diversity memo in which he claimed the gender gap in tech is due to biological differences between men and women, rather than discrimination. And, while Damore did not directly ascribe to a political party, he compared being conservative today to being gay in the 1950s.

Damore's comments echoed what staffers of color and women in a variety of STEM-focused careers have heard repeatedly in predominantly white offices and schools: They don't belong here.

Still, they continue to prove naysayers wrong through their hard work, dedication, and brilliance.

Simply look at a tech conference, the launch of a millennial-focused website, or a new startup initiative to find women and people of color changing the face of tech in innovative and influential ways — in spite of working with and often being educated by people like Damore.

Here are seven badass people of color changing the game for minority groups in tech.

Walker & Company Brands, Inc., is a grooming products company for African-Americans, and CODE2040 is an organization dedicated to providing tech pathways in the innovation economy for black and Latinx people. Through these ventures, Walker has used his business and tech savviness to create businesses and organizations by and for people of color.

Walker often speaks at conferences to discuss the importance of teaching tech in schools and communities of color, and he advocates for increasing the number of women and people of color in tech.

After graduating from Oxford and Harvard Business School, Ruzwana Bashir worked in investment banking before creating Peek, an online platform for vacation planning. The U.K. native of Pakistani descent has had profound influence in the tech industry, and she's used her voice to speak out against sexual assault and abuse.

Photo by Slaven Vlasic/Getty Images for the 2015 Tribeca Film Festival.

3. Khalia Braswell, UI/UX designer at Apple and founder of INTechCamp

According to a report from National Center for Women & Information Technology (NCWIT), black women only hold 3% of computing jobs. Khalia Braswell is one of the many faces in the competitive STEM field working to change this. The Apple UX designer founded INTech Camp in 2014, aiming to expose more girls of color to technology and to increase gender and racial representation in tech in future years.

"Being future ready means building relationships, remaining positive, and giving back to those that helped you along the way," Braswell said in a speech for NAF (formerly the National Academy Foundation). Braswell maintains an active social media presence and continues to work with young girls in her nonprofit.

The innovative technology veteran has worked with business and health care clients, such as Emory University and Veterans Health Administration, for 20 years to provide software solutions for their initiatives.

"I loved the creativity along with the structure, and I realized that software development was both a science and an art form," Warren told Redox. "I went on to study computer science in college and was hooked."

Warren earned her master's degree in computer science and is now the leader of Survivor Plan, a company that works to provide personalized solutions for cancer survivors, their clinicians, and their loved ones.

Miralles is known as a a pioneer of virtual reality at NASA. Her career, spanning 25 years, has influenced women around the world. She is one of many Latina women who have paved the way for more opportunities for women and people of color in science and technology.

Miralles was on the BBC World 100 Women list, CNET's Top 20 Latinos in Technology list, and is a distinguished alumna of University of Houston Clear Lake.

Clennita Justice, a former Apple employee, has worked on a variety of projects at Google, including assisting with launching Google Play Books (formerly Google Books).

“I’m always doing something around my own personal development, and I’ve always thought of technology as a means for helping us be better people and have better lives, enjoy our lives, and increase our self-awareness,” Justice told Google Careers.

Justice now works in product strategy to manage an in-product tool designed to complete surveys to asses user satisfaction. She is also a member of Black Googles Network (BGN), an organization that serves as a resources for Black "Googlers" and allies.

Morgan DeBaun is the co-founder and CEO of Blavity, a website dedicated to black millennials. The Forbes 30 Under 30 alumna saw a need for a content space created by black people, so she left her job and used her tech skills and business knowledge to create a website that constantly produces viral, relevant content for her audience.

She has also worked to create spaces for black people and women in tech, including AfroTech, the largest black tech conference in Silicon Valley.

These seven are just a handful of examples of the numerous men and women of color innovating and changing the future of technology. It's imperative we continue creating opportunities for diversity in our elite school systems and the workplace.