5-year-old saves baby from peril, dressed as Batman. This is not pretend. It really happened.

He is vengeance. He is the night. He is a 5-year-old boy in a Batman costume, and he just saved a little girl's life. 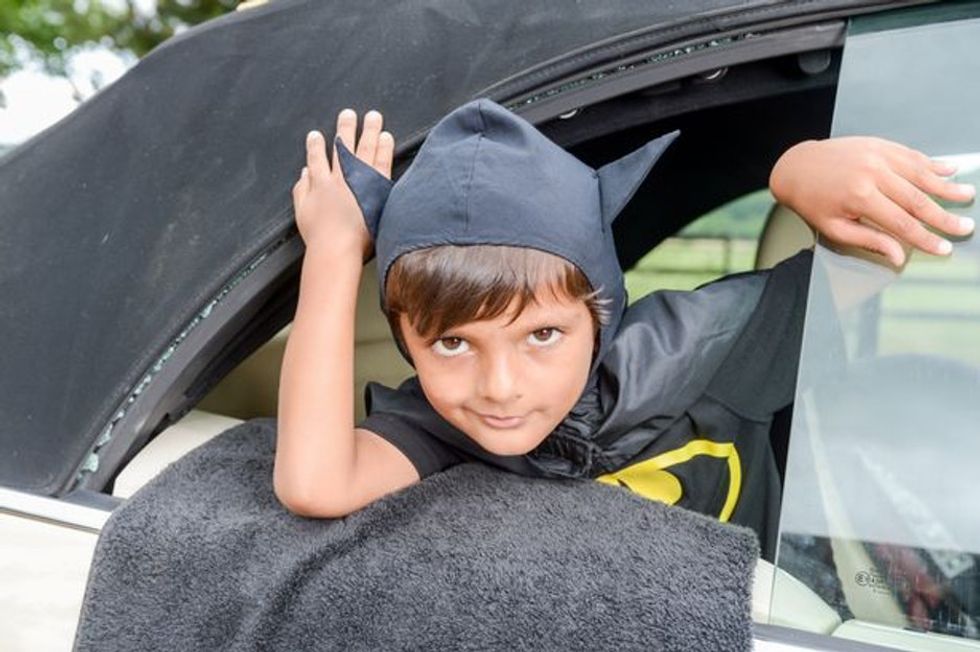 According to Yahoo! Parenting, it was a scorching July afternoon when John and Caroline Penny went to the Tesco with their 1-year-old granddaughter, Iris Adamski ... and then accidentally locked her in the hot car.

The good officers did what they could, but their only option was to smash open the back window. And even then, there was no one small enough to crawl inside and retrieve the keys or the child.

GIF from "The Dark Knight Returns."

It was then that Batman arrived, like a beacon in the night. Or at least a 5-year-old boy dressed like Batman.

"That morning [Zavi] decided he wanted to be dressed as Batman, I don't know why," Emma Ahmed, the mother of the 5-year-old hero, told The Daily Mail.

Was it fate or some greater power that inspired Zavi to don the mantle of the Dark Knight on that of all days and for his mother to bring him with her to the Tesco at such a fortuitous time?

The Caped Crusader risked life and limb as he crawled his way through broken glass.

Zavi was the only one around small enough to fit through the car's back window, retrieve the keys, and save the trapped damsel in distress.

It should be known that Zavi's brother, Nadeen, who was dressed as Superman, stood by and did nothing during his brother's remarkable show of bravery.

In fairness, it should also be known that Nadeen is 2 years old.

With the innocent returned to safety and justice served, the Dark Knight ... went into the Tesco with his mom.

Presumably, Bat-Zavi and Super-Nadeen returned to the Hall of Justice and spent the afternoon gorging on Aero bars, although our sources can neither confirm nor deny this development.