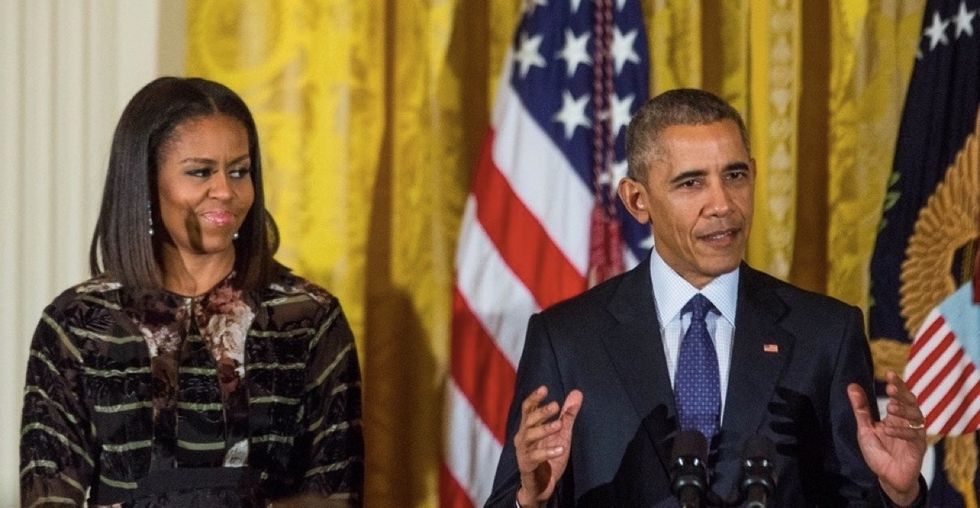 For the eighth and final time, President Obama and the first lady welcomed guests to the White House for a Hanukkah reception.

Hanukkah commemorates the Jewish rebellion, led by Judah Maccabee and his brothers against their Greek-Syrian oppressors. After their victory, Judah Maccabee hoped to light an eternal flame to rededicate the Second Temple in Jerusalem, but could only find one vessel of oil. Led by faith, the Jewish people lit the oil, and according to sacred texts, it burned for eight days.

Today, Jewish people celebrate Hanukkah by lighting a candle on a menorah each night. The Obamas and the White House marked the occasion — this time with two Hanukkah receptions in the East Room.

Mika Almog lights a menorah and Rabbi Rachel Isaacs says a blessing during a Hanukkah reception at the White House. Photo by Zach Gibson/AFP/Getty Images.

The Obamas welcomed honored guests to join together to light the White House menorahs.

The events were held Dec. 14, 10 days before the start of Hanukkah, which begins at sundown on Dec. 24 this year.

At the afternoon event, the Obamas were joined by the family of Elie Wiesel, a Holocaust survivor, critically acclaimed author, Nobel laureate, and educator who passed away in July. President Obama lit a menorah made by Wiesel’s granddaughter Shira when she was in kindergarten. In the evening, the family of the late Shimon Peres was on hand to light a treasured family menorah.

A snowman with a yarmulke is seen at the White House. Photo by Aude Guerrucci/Getty Images.

But it was President Obama’s words that offered a powerful message of hope to people of all faith traditions.

In his remarks, Obama outlined the many positive contributions Jewish people have made in the fight for equality and freedom. From Selma and Stonewall to opening their hearts and homes to refugees, Jewish people have acted with courage, conviction, and strength in the face of adversity. While their story is not unique, there's so much we can learn from the their resilience and optimism.

Here are five of my favorites from President Obama's remarks:

1. “Today in the White House ... we recall Hanukkah’s many lessons:  how a small group can make a big difference.”

2. “Even when our resources seem limited, our faith can help us make the most of what little we have.”

3. “This is the season that we appreciate the many miracles, large and small, that have graced our lives throughout generations and to recognize that the most meaningful among them is our freedom.”

4. “We teach our children that even in our darkest moments, a stubborn flame of hope flickers and miracles are possible."

5. “Through centuries of exile and persecution, and even the genocide families like the Wiesels endured, the Hanukkah candles have been kindled. Each wick an answer to the wicked. Each light a signal to the world that yours is an inextinguishable faith.”

The granddaughter and son of  Shimon Peres, one of Israel's founding fathers, light the menorah. Photo by Aude Guerrucci/Getty Images.

At holiday time and always, that's an important thing to remember: If we stand together, we can defeat even the toughest oppressors.

Just as the Maccabees rededicated the temple, we can take a moment this season to rededicate ourselves to being good neighbors and citizens, to leading with kindness and compassion. Because when we come together as a community and a country, there's nothing we can't accomplish.