So ... cats are basically magic. And this can be proven. With science. 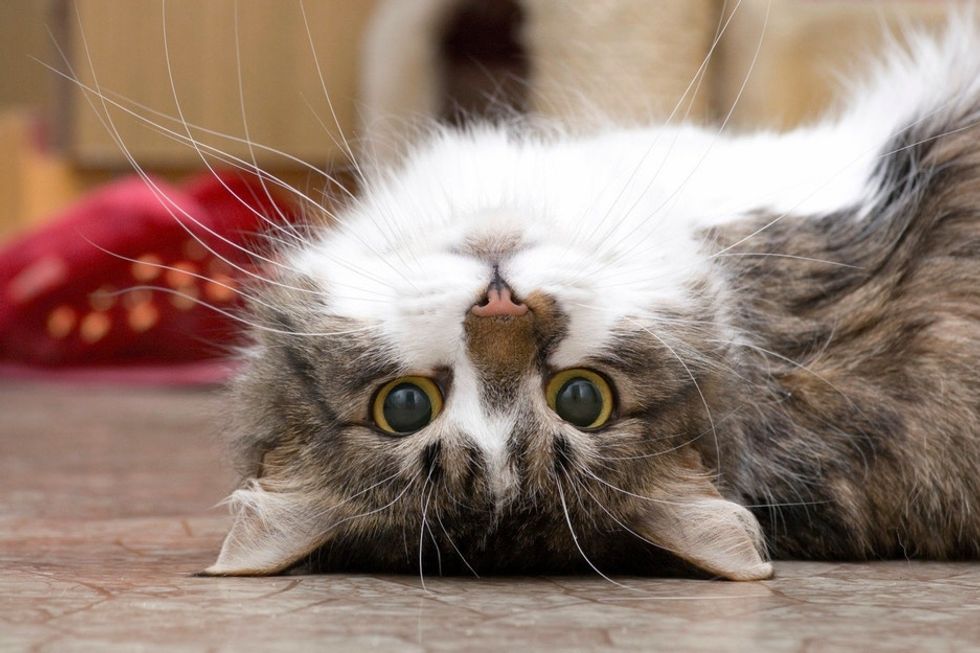 Anyway, most folks agree that cats are pretty amazing. But here's the thing: There's more to cats than videos of them hanging out in boxes or memes about having a cheeseburger. In fact, cats can do so much more than entertain the Internet.

"I'm just a kitten on the Internet tryna have a good time."

It's true! And before you go off to your local shelter to adopt a zillion of them in hopes of becoming some kind of immortal cat-themed super-villain, let's put our protective safety goggles on and dig into some science facts. (And then we can talk about adopting cats and/or villainy!)

I mean, we were all thinking about Catwoman here, right?

How does this work? Well, cat purrs actually promote healing.

We all know what cat purrs are, although veterinarians aren't entirely sure what the deal is them — and no, that's not a setup for a Jerry Seinfeld-style joke.

They really aren't sure why cats purr. Some suggest cats do it when they're content, which makes sense. But they also purr when they're injured or scared, which probably means they aren't content. Like, at all.

FACT #2: Those cute cat purrs exist in a super-special vibration range that has the potential to be medically therapeutic.

Your average house cat's purr has a frequency between 25 and 150 hertz. That's interesting because that's also the frequency at which muscles and bones are able to best repair themselves. So cats might be self-healing.

But that's not all: Those super-special, super-adorable cat purr vibrations also exist at a frequency that's good for humans too. Purr The Scientific American, these vibrations are well within "medically therapeutic" range (25-150 hertz). And it's not just one study either. There are several that have found that the pattern of cat purrs as well as their sound frequency can actually help both cats and humans.

What does this mean?

Uh, well, that your purring cat can help with bone and muscle repair, pain relief, dyspnea (shortness of breath), and so. Much. More.

And that's just the tip of the iceberg.

FACT #3: Owning a cat may mean less stress in your life.

Well, unless your cat likes to jump out and scare you (like mine).

My cat hiding in a paper bag. Because why not?

But science says that in studies about pet owners versus non-pet owners, folks who owned cats had significantly fewer stress symptoms. Dog owners were #2 in low stress. And in last place? People without any pets.

Here's the kicker: Owning a pet (cats and dogs) in general reduced stress-related blood pressure more than medication designed specifically to do that (aka ACE inhibitors).

Now, having way lower stress because of an adorable little fuzzball in your life is actually a really big deal health-wise because...

FACT #4: Cats can reduce the likelihood of having a heart attack! By 40%!

The University of Minnesota found that owning a cat might actually be good for your heart, and not just in an "Oh my gosh, I am just so overwhelmed with love for this animal!" kind of heart-stuff way.

In their study, they found that folks who did not own a cat were 40% more likely to have a heart attack and had a 30% higher chance of dying from heart disease than cat owners did. Which is just like ... what?!

So, why is this? Well, researchers at the University of Minnesota said this:

See? Less stress, less anxiety = fewer heart and blood pressure issues. Also, probably more tripping over cat toys at two in the morning, but I couldn't find anything about that in the study. Oops.

... as my former stats professor would say.

Yes, studies have found that cats can reduce stress, the likelihood of cardiovascular disease, and even potentially give you some purr therapy. But that doesn't mean that you should quit your job and hang out in a cave with some cats to live forever.

In fact, these findings could say more about the lifestyles of the average cat owner than the mystical powers cats have over the human body.

Still, these studies are pretty compelling. And hey, if that means I can go around telling people that cats are actually magic, then I'm totally down, y'all.

That cat is performing magic behind me, obviously.

So, yeah. Cats? Adorable little monsters who just want your love and also can heal you (maybe). And now for the infographic to prove it, just in case all this wordsmithin' isn't enough and you need some fun visuals to really get the point across.

Aww, yes, that information looks even better in infographic form.

But you know what's better than infographics?

Adopting a cat from your local shelter!

According to the ASPCA, 7.6 million animals are put in shelters every year, and of those, 3.4 million are cats. It gets worse because an astonishing 1.4 million cats are euthanized. That means around 37% of cats in shelters are adopted ... while 41% are put down.

So there are wonderful adoptable cats out there, just waiting for your love and time and attention. Actually, there are a ton of them, so if you can, you should totally adopt. And in return? They'll possibly use their magical healing powers on you ... and love you. A lot. And there's nothing better than that.

If you can't adopt right now, you can always foster a cat. Or volunteer some of your time at your local animal shelter. Who knows, if you stay there long enough, maybe you too will become immortal.

Hey, it's worth a shot, right?