36 years before her, Blake Shelton used this girl's textbook. That's not a great thing.

It's been in circulation for a very, very long time. 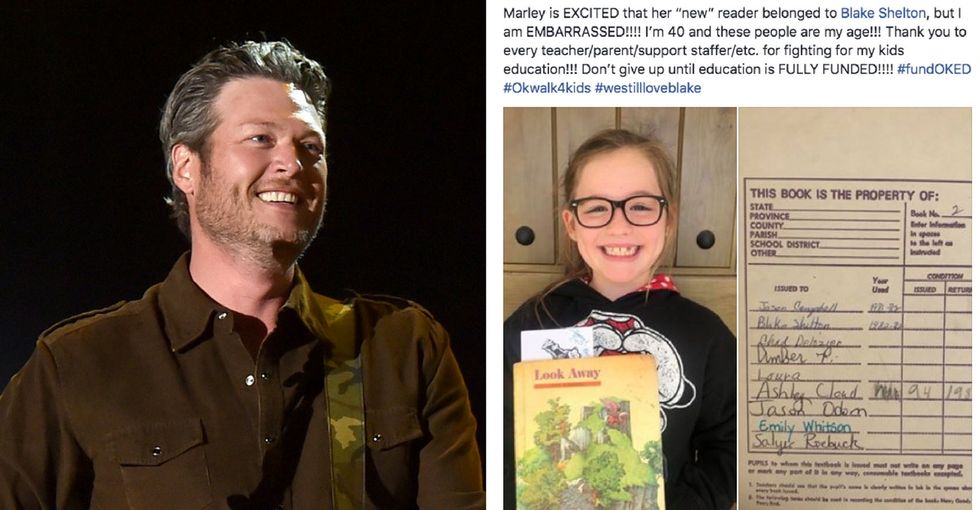 Imagine opening up one of your textbooks to learn that it used to belong to one of the top country music stars of our time. Pretty cool, right? Maybe not.

When first grader Marley Parker opened up her new reader, she saw a familiar name scrawled in the sign-out page: Blake Shelton. It could be a neat coincidence (Marley and her family live in Shelton's hometown of Ada, Oklahoma, and though Shelton hasn't commented on whether it was his, it is possible), but regardless — the 1982 date by Shelton's name means the book has been in circulation for at least 36 years.

Marley was excited. Her mom, Shelly Bryan Parker, was not. Shelly wrote in a Facebook post, "I am EMBARRASSED!!!! I'm 40 and these people are my age!!! Thank you to every teacher/parent/support staffer/etc. for fighting for my kids education!!! Don't give up until education is FULLY FUNDED!!!!"

Marley is EXCITED that her “new” reader belonged to Blake Shelton, but I am EMBARRASSED!!!! I’m 40 and these people are...

"Oh my gosh man you have to be kidding me. It’s a fucking book! It still has pages and the child can learn!! If teachers really cared about teaching, they would print shit off and teach!! Not complain about what they don’t have! They are forgetting about teaching at the most important time of year, the kids should be studying for tests, not worried about teachers not wanting to teach!!"

"My main question is when did they change the alphabet that they need to buy a new book ... the letter A is still the letter A right? Or did it change to an S?"

But the issue isn't about whether the content of the book itself is outdated. The commenters are probably right that not much has changed in the world of first grade literature in the past few decades. They're also right that the book looks to be in fairly good condition. The issue is that many old textbooks being used in Oklahoma schools are outdated or in a virtually unusable condition.

Oklahoma teachers began April 2018 with a walkout, calling on the state legislature to improve their pay and fund their classroom needs.

Parents, teachers, students, and supporters marched on the state capitol building to urge lawmakers to approve $200 million in annual education funding increases, and they're making a good case. According to the nonpartisan Center on Budget and Policy Priorities, inflation-adjusted funding per student in Oklahoma dropped 28.2% between 2008 and 2018. Factor in that Oklahoma, a state that heavily subsidizes energy companies, has the lowest teacher pay in the nation, and they're absolutely right to feel a bit outraged.

Oklahoma Governor Mary Fallin added fuel to the fire when she criticized the teachers for being entitled, saying, "It's kind of like having a teenage kid that wants a better car."

That comment came after the state approved a roughly $6,000 a year pay increase for teachers, and a $50 million funding increase, well short of the teachers' request. Previously, she said she hoped teachers would stop by the capitol to "thank" her and legislators. It doesn't seem that she understands the situation.

Teachers do this work because they love children, because they want to help inspire a new generation of leaders. They know going into it that they're going to be overworked and underpaid, but they do it anyway. What Gov. Fallin and other elected officials in favor of cutting public spending are doing is nothing short of exploitation. Teachers are finally saying "enough," and it's on all of us to stand with them, and their students, in their fight for fair treatment and adequate funding.

Thousands gathered and marched in a picket line outside the Oklahoma state Capitol building on April 4, 2018, in Oklahoma City, Oklahoma. Photo by Scott Heins/Getty Images.

It's on us to fight for a world where no student has to use 36-year-old textbooks.