11 panda facts that are really just an excuse to look at some pandas.

There are a lot of things you might not know about the no longer endangered species. 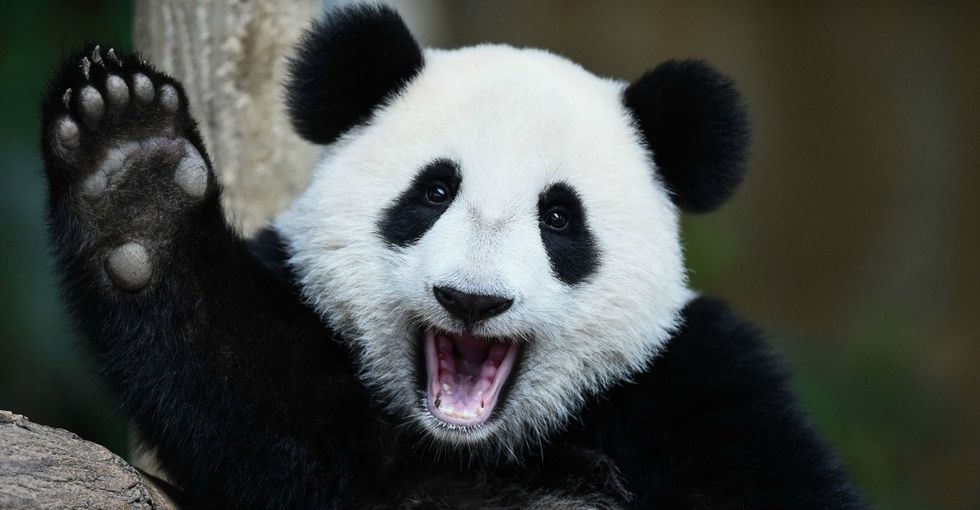 In September 2016 news broke that the giant panda was no longer considered "endangered" and there was much rejoicing.

Thanks to the incredible conservation efforts of the Chinese government and international groups like the World Wildlife Fund (WWF), the species is now classified as "vulnerable." Conservation efforts began back in the 1960s, when four panda reserves were set up in China and hunting the species was outlawed.

It's always a victory when a species starts bouncing back from extinction, but here's so much more to these gentle giants than most people even know.

Here are 11 other awesome reasons to celebrate the great giant panda:

1. Giant pandas have a bone in their wrists that acts like an opposable thumb.

Thought apes were the only ones who could grip things like humans? Guess again. Pandas actually have six "digits" on each paw, including something called a radial sesamoid — a bone in their wrist that acts as an extra digit, similar to a thumb, and allows them to hold and munch on thin bamboo rods with ease.

2. Dogs can make great surrogate parents to baby pandas who are abandoned at birth.

That's about the size of a stick of butter. Photo by STR/Getty Images.

While it is rare for a female panda to have twins, if she does, all her attention will go to the larger, more capable cub, and she will abandon the other. This sounds cruel, but it's part of natural selection and, often, the only way any panda cubs survive at all.

Conservationists, however, have discovered dog moms make great substitutes when panda moms reject their young. Dog milk is similar enough to panda milk that if a new dog mom accepts the panda baby into her puppy litter, the baby panda is much more likely to survive.

3. America received its first pair of pandas thanks to President Nixon.

Even though the Cold War was going on, Nixon famously extended an olive branch to Chairman Mao Zedong and the People's Republic of China in 1972.

As a thank-you, Chairman Mao gave America its first two giant pandas: Hsing-Hsing and Ling-Ling. An estimated 75 million visitors got to see them throughout their long lives at the National Zoo.

4. Female giant pandas only ovulate once a year.

Once a year, female giant pandas become fertile for a mere two to three days. This extremely tight procreation window makes the species' population increase all the more significant and amazing, especially considering females often only have one or two babies at a time.

5. Their bamboo diet is actually not very nutritious.

The giant panda diet consists almost entirely of bamboo, which is rather lacking in nutrients. As such, the species is known to eat an estimated 26-48 pounds of bamboo a day.

6. While the species has been upgraded from "endangered" to "vulnerable," climate change may hurt the giant pandas' population growth and land it back on the endangered species list.

Due to the giant pandas' proclivity for bamboo (and need to eat a lot of it), the species could end up back on the endangered species list because climate change is predicted to eliminate 35% of pandas' bamboo habitat in the next 80 years.

7. Giant pandas play a vital role in the conservation of bamboo forests.

While eating all that bamboo, giant pandas are helping spread bamboo seeds around, which in turn helps new bamboo plants grow. In saving the giant pandas, China is saving the bamboo forests, and all the other species that live in them.

Their broad paws and retractable claws are extremely helpful in all tree-climbing scenarios.

9. Giant pandas communicate by rubbing their butts on things.

10. They've got huge molars to crush all those bamboo stalks.

The giant panda's diet is 1% carnivorous (meaning, 99% of what they eat is vegetation, though they've been known to eat meat on occasion); giant pandas have the largest molars of all carnivores. Of course, unlike their carnivore cousins, giant pandas use them for crushing bamboo stalks rather than bone.

11. Because the species is elusive and lives in remote, getting an accurate count for the giant panda population is challenging.

The process of estimating the growth of the giant panda population has been one of the most extensive in history for one entire species.

The official estimate of their numbers is 2,060, but studies have shown there might actually be more like 2,500 to 3,000 out there in the world today.

Whatever the number is, hopefully it will continue going up. There's still much to be done in terms of conservation, but all things considered, the giant panda is definitely on the right track.