Woman's creepy texts from a total stranger show the dangers of being female in public. 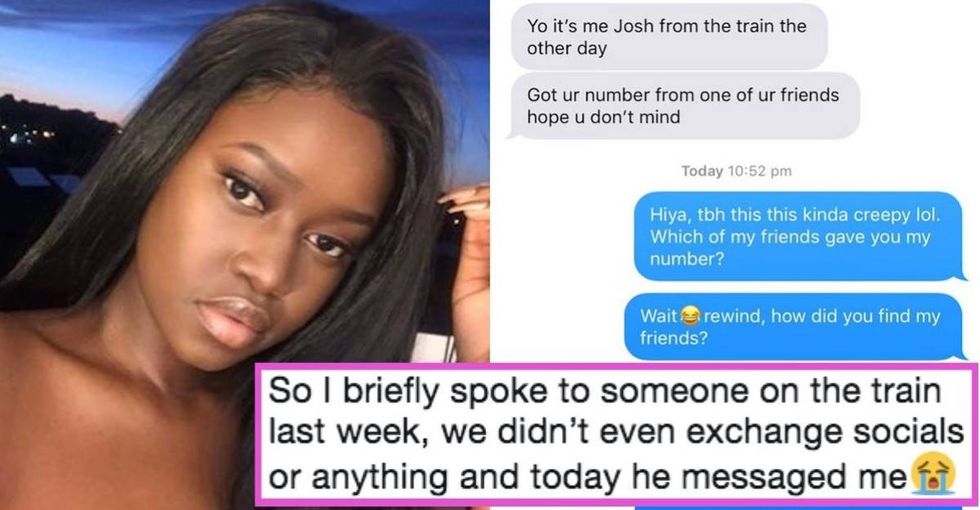 Sadly, many times being a woman in the world means you're treated as a walking target. Simple daily errands can quickly become complicated because of cat calling and street harassment.

Unfortunately, the expectation that women will be smiling and accommodating to the most entitled of strangers can quickly escalate into crossed boundaries and dangerous situations.

Twitter user Lynda Lorraine faced one of these situations after briefly chatting with a man on the train. From her end, their exchange was brief, uneventful, and didn't involve any exchange of contact information.

However, for him, it was an open door to stalk her online until he found her cell phone number — at which point he asked her out.

Everything about this exchange is a major breach of her boundaries.

First off, he hits her up without warning and doesn't reveal how he got her number beyond saying it was through "a friend."

This of course begged the question of how this man found Lynda's friends in the first place. Also, what did he tell her "friend" to get the phone number? Most good pals wouldn't give a female friend's number out to a random dude from the train, so it's likely he lied or elaborated on their original exchange in order to get her digits.

The creepy train stalker then tried to manipulate her by saying he'd only reveal how he got her number if she met up for a date. There are roughly 50 red flags in that flirting tactic alone.

When Lynda laid out just how creepy his behavior was, he predictably lashed out and insulted her.

Their exchanged ended very, very poorly, and she never found out which "friend" gave out her number.

Needless to say, Lynda's followers were just as miffed by the exchange as she was.

The wildest part is this man seemed to generally think this was a smooth and romantic dating move?! That's a big yikes on multiple levels.

Rom coms have given us all unrealistic expectations of meet-cutes, and severely blurred the lines of safe and appropriate boundaries.

The biggest mystery still looming is which "friend" gave him Lynda's number.

Did he secure the number some other way and lie about the "friend?!" Did he lie to the "friend" in order to get the number, or was there some frenemy situation going on? So many questions still at hand.

@Lyndahx @angryblackwunmi I wouldn't be surprised if it turned out not any of your friends but some shady trick. I mean it's possible, but.
— Shirley 🇮🇩🇨🇳🇵🇹 (@Shirley 🇮🇩🇨🇳🇵🇹) 1547470495.0

Hopefully, this man isn't a full-on stalker and just has bad boundaries — because in that scenario there is hope that he'll reform his ways.

Either way, it seems prudent that Lynda shut it down and didn't take him up on the deeply manipulative date offer.

This post was originally published by our partners at someecards and was written by Bronwyn Isacc.